A different kind of crop 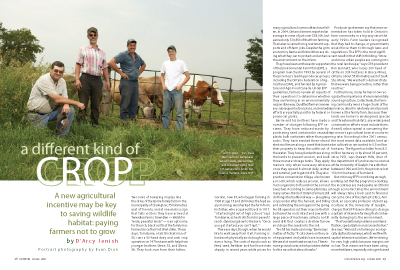 A new agricultural incentive may be key to saving wildlife habitat: paying farmers not to grow

Two rows of towering maples line the drive of the Barrie family farm in the municipality of Clarington, 75 kilometres east of Toronto, and at one end is a sign that tells visitors they have arrived at Terwidlen Farms. Terwidlen — Welsh for “wide, peaceful lands” — is an apt name for the rich, black soil that the family has farmed since the First World War. These days, Tom Barrie, a tall, thickset man of 55, runs a 50-head dairy and cash crop operation on 147 hectares with help from younger brothers Steve, 52, and Glenn, 38. They took over from their father, Gordon, now 87, who began farming in 1934 at age 15 and still mixes the feed every morning. He inherited the farm from his father, who acquired it back in 1917. “I started right out of high school,” says Tom Barrie, as he strolls from his parents’ ranch-style bungalow to the barn. “Once you get started, you can’t quit.”

There are days, though, when he would like to walk away from it all. Farming is hard work physically and a tough way to earn a living. The costs of inputs such as feed, seed, fertilizer and fuel have risen sharply in recent years while prices for many agricultural commodities have fallen.

In 2004, Ontario farmers reported an average income of just over $53,000, but earned only $10,850 of that from farming. The balance came from government supports and off-farm jobs. Despite the grim economics, Barrie and his brothers are doing what they can to protect and enhance the environment on their farm.

They have been enthusiastic supporters of the Environmental Farm Plan (EFP), a program launched in 1993 by several of the province’s leading producer groups, including the Ontario Federation of Agriculture (OFA), and funded by Agriculture and Agri-Food Canada. Under EFP

guidelines, farmers review all aspects of their operations to determine whether they are farming in an environmentally responsible way. Qualified farmers review any subsequent action plans, and remedial efforts are partially paid for by federal or provincial grants.

Barrie and his brothers have made a number of changes following EFP reviews. They have reduced waste by purchasing seed contained in reusable plastic bulk containers rather than paper sacks. They have erected three-strand electrical fences along a creek that bisects their property to keep the cattle out of the water. They have planted trees along the banks to prevent erosion, and built three manure storage tanks. They apply manure only when necessary whereas once they spread it almost daily, winter and summer, just to get rid of it. They also practise conservation tillage, also known as no-till, which reduces erosion, allows microorganisms to flourish in the soil and saves fuel. According to some estimates, as many as two-thirds of Ontario farmers still do things the traditional way — ploughing crops under after the harvest, and tilling and cultivating the soil again in the spring. No-till operators cut their crops in the fall but leave the roots intact and sow with a large piece of machinery called a no-till seed drill that creates a shallow furrow and drops the seeds into the soil.

“No-till has made us money,” Barrie says matter-of-factly. “It cuts down on the use of equipment and yields have increased. We see a lot more hawks now, too. There’s more ground cover, which provides shelter for the mice that attract hawks.”

Producer spokesmen say that environmentalism has taken hold in Ontario’s farm community in a big way since the early 1990s. Farm leaders recognized that they had to change, or governments would force them to through laws and regulations. The EFP is the most significant result in that shift in thinking. “More and more urban people are coming into the rural landscape,” says OFA president Ron Bonnett, who raises 200 head of cattle on 324 hectares in Bruce Mines, Ontario, about 55 kilometres east of Sault Ste. Marie. “We wanted to demonstrate that we were being proactive, rather than reactive.”

Furthermore, many farmers now recognize the importance of environmentally sound agriculture. Collectively, the farming community owns a huge chunk of the province, albeit in relatively small parcels known as the family farm. Because their lands are home to endangered species and threatened habitats, any widespread conservation efforts must include them. As well, urban sprawl is consuming the province’s agricultural base at an alarming rate. According to the 2001 census, the most recent data available, land under cultivation amounted to 5.5 million hectares. The figure has fallen from 8.5 million hectares, or by about 35 percent, since 1951, says Stewart Hilts, chair of the department of land resource science at the University of Guelph. He adds that between 1996 and 2001, the province lost 150,000 hectares of farmland.

But critics say EFP is not doing enough, pointing out that the program is voluntary, the incentives are inadequate and that in tough economic times the environment will always take a back seat to financial concerns. One of the sternest critics, Ann Clark, an associate professor of plant agriculture at the University of Guelph, charges that EFP does nothing to change a system of intensive farming that is inherently damaging to the environment.

“The foundational problems are intensification, specialization and concentration,” she says. “We insist on farming in ecologically dysfunctional ways, which we fix with capital-intensive solutions. We’re striving for very high yields because margins are so low. That means we have been using more fertilizers, especially nitrogen-based fertilizers and have had greater dependence on pesticides. It’s a vicious cycle.”

Perhaps farmers across the country need a new system of financial incentives, one that goes further than EFP, to preserve ecosystems and promote environmentally sound agriculture – or so say two Manitoba-based organizations, Keystone Agricultural Producers (KAP) and Delta Waterfowl. The groups are promoting something called Alternative Land Use Services (ALUS). Under this system, governments and other stakeholders would pay farmers annually for ecological goods and services (EGS) such as preserving wetlands, woodlots and riparian areas or restoring native flora on less desirable lands.

“ALUS is a major initiative,” says Robert Bailey, Canadian vice-president of policy for Delta Waterfowl, an organization that supports habitat preservation conservation and research on waterfowl. “It requires a huge change in thinking on the part of farmers, environmental groups and governments.”

The price of protection

Some farm organizations are advocating that farmers be paid for conserving “ecological goods and services” – such as clean air and water, carbon-sequestering woodlots and natural habitats – that society wants and from which all of society benefits. Across Canada, farm groups, governments and others are collaboratively conducting or planning pilot projects to compensate farmers for these Alternative Land Use Services (ALUS). ALUS is in its infancy, as questions concerning who pays, how much and for what get sorted out.

Ontario Nature supports the conservation of natural capital – another term for ecological goods and services. For that reason, we encourage ALUS pilot projects as a learning experience. But because natural capital is a feature of the landscape regardless of who owns the land, Ontario Nature would like to see ALUS pilot projects include owners of rural non-farm properties as well as farmers.

Officials with many Ontario agricultural organizations say EFP has earned the support of the province’s farmers and that it is fulfilling its mandate with respect to environmental concerns. Andy Graham, who manages the program on behalf of the Ontario Soil and Crop Improvement

Association, points out that since April 2005, 3,000 farmers had applied for funding under either federal or provincial cost-shared programs, and that Ottawa and Ontario together had allocated $48 million for 6,100 projects. In addition to that, farmers themselves have invested $100 million in remedial projects. “That,” says Graham, “is a huge commitment to environmental improvement in Ontario.”

But the problem with EFP, counter proponents of ALUS, is that it pays farmers one-time subsidies to cover a third to a half of their expenses for such things as planting shelter belts or buffer strips along waterways. The individual landowner is responsible for all ongoing maintenance costs and must absorb the costs that result from taking farmland out of production in order to preserve a wetland or restore sloped lands to natural grasses.

Under ALUS, such measures would be recognized as environmental goods and services that provide benefits to all Canadians. Therefore, the public would compensate farmers on an annual basis because they would incur ongoing costs. The idea, says Robert Sopuck, Delta Waterfowl’s vice-president of policy for the Prairies, is to convert environmentally sound practices from financial liabilities into revenue-producing assets. “It is too much to ask farmers to bear these costs on their own,” says Sopuck. “ALUS would allow the farmer to add a new crop to his land, an environmental crop.”