A road runs through it 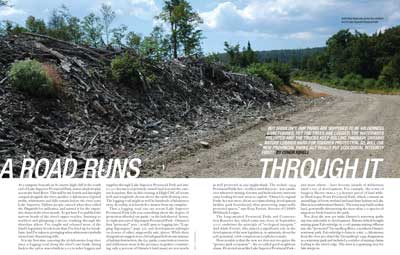 But shouldn’t. Our parks are supposed to be wilderness sanctuaries, yet the trees are logged, the waterways polluted and the trucks keep rolling through. Ontario Nature lobbied hard for tougher protection. So, will the new Provincial Parks Act really put ecological integrity first?

At a campsite beneath an 80-metre-high cliff at the south end of Lake Superior Provincial Park, sunset shadows play across the Sand River. This will be my fourth and last night camped alongside the river; another 10 kilometres of gravel swifts, whitewater and falls remain before the river joins Lake Superior. Ojibwa people canoed what they called the Pinguisibi for millennia, and named it for the expansive dunes at the river mouth. To get here I’ve paddled the narrow bends of the river’s upper reaches, listening to warblers and glimpsing a moose crashing through the shoreline alders. I’ve caught and released more of the Sand’s legendary brook trout than I’ve fried up for breakfasts. And I’ve taken to portaging when whitewater pinballs turned into thundering falls.

Mention Algonquin Provincial Park to most Ontarians and images of pristine wilderness, Group of Seven paintings and summer canoe trips come to mind. But what many people may not realize is that the park is also home to a forestry industry that supplies wood to a variety of mills in central and eastern Ontario.

Logging has a long history in Algonquin. As Ontario’s first provincial park, Algonquin was established in 1893 partly to protect logging opportunities in the region from expanding settlement and agriculture. Initially, loggers harvested white and red pine, but today other species, such as jack pine, hemlock and yellow birch, are also cut in the park. Of the park’s 770,000 hectares, 78 percent is zoned for logging. Some of this area, however, is not subject to forestry, such as lakes, wetlands, rock barrens and Areas of Concern. As a result, approximately 57 percent of the park is actually available for logging. In any given year an estimated 11,000 hectares of Algonquin’s forests are logged, or 1.5 percent of the total area of the park.

Recently, the Ontario government passed its new parks act, enshrining ecological integrity as the fundamental principle behind all protected areas management. The act also banned logging from all parks and conservation reserves, except for Algonquin. Former Minister of Natural Resources, David Ramsay, requested that the Ontario Parks Board provide advice on how to decrease the ecological footprint of logging in Algonquin Park while maintaining current wood supply. The board released its recommendations for public comment in May 2007.

The board makes three main recommendations in its report. First, it advocates expanding protection zones (where logging is prohibited) within the park from the current 22 percent of park area to 54 percent. The board further recommends that the Ministry of Natural Resources (MNR) and the Algonquin Forestry Authority (AFA, a Crown agency responsible for forest management in the park) develop a strategy to reduce the impact of logging in Algonquin. In particular, logging requires a significant road network (and associated aggregate pits) throughout the park, leading to myriad negative ecological effects. CPAWS Wildlands League estimates that Algonquin has more than 8,000 kilometres of roads, four times the distance of its canoe routes. Finally, the board encourages MNR and AFA to develop improved forest inventory techniques so that wood supply can be more accurately estimated while enhancing environmental protection.

“While there have been concerns from logging companies and Ottawa Valley communities that draw wood from Algonquin, the general public response to the recommendations has been overwhelmingly positive,” says Ric Symmes, chair of the Ontario Parks Board subcommittee responsible for the report, and former executive director of Ontario Nature. “The recommendations were framed to maintain current Algonquin wood volumes and jobs, at least for the next decade.”

All sides now await word from the minister on whether the recommendations will be implemented. “Algonquin is an anomaly,” says Symmes. “It is the last major park in Canada where logging is permitted, as far as we know. Logging has been phased out in other parks because the so-called multi-use approach doesn’t work well for natural heritage and recreation. The situation in Algonquin is an historical artifact.”

It is my first time canoeing the 56-kilometre-long river since a logging road along the river’s east bank, dating back to the 1960s, was rebuilt in 2003 to usher loggers and supplies through Lake Superior Provincial Park and into 20,000 hectares of privately owned land beyond the eastern boundary. But on this evening at High Cliff, all seems well and songbirds chorus above the swift-flowing river.

The logging road might as well be hundreds of kilometers away. In reality, it is barely 800 metres from my campsite. That a logging road can cut across Lake Superior Provincial Park tells you something about the degree of protection afforded our parks – or the lack thereof. Seventy-eight percent of Algonquin Provincial Park – Ontario’s first “protected” area – is still open to logging (see “Logging Algonquin”), and development infringes on dozens of other, supposedly safe, places. While their designations suggest iron-clad safeguards from any manner of habitat destruction, the 631 parks, conservation reserves and wilderness areas in the province (together constituting only 9 percent of Ontario’s land mass) are not nearly as well protected as one might think. The archaic 1954 Provincial Parks Act – in effect until this year – was a pushover whenever mining, forestry and hydroelectric interests came looking for new areas to exploit. “Ontario’s original Parks Act was more about accommodating development [within park boundaries] than preserving supposedly protected spaces,” says Evan Ferrari, director of CPAWS Wildlands League.

The long-awaited Provincial Parks and Conservation Reserves Act, which came into force in September 2007, enshrines the principle of “ecological integrity.” And while Ferrari, who played a significant role in the development of the new legislation, is optimistic about the act’s potential, a few conspicuous loopholes remain.

Most notable is that the new act does not recognize the “greater park ecosystem” – the so-called good neighbour clause. Protected areas like Lake Superior Provincial Park – and most others – have become islands of wilderness amid a sea of development. For example, the town of Saugeen Shores owns a 7.5-hectare parcel of land within MacGregor Point Provincial Park, which contains an assemblage of forest, wetland and sand dune habitat on Lake Huron in southwestern Ontario. The town may build on that land, potentially threatening the more than 100 species of migratory birds found in the park.

Nor does the new act make Ontario’s waterway parks any less vulnerable to development. Xstrata (which bought mining giant Falconbridge in 2006) pumps mining effluent into the “protected” Groundhog River, a northern Ontario waterway park. Falconbridge’s claim to a site 12 kilometres from the river pre-dated the Groundhog’s 1999 designation as a waterway park and included a corridor of mining claims leading to the river’s edge. The river is a spawning area for lake sturgeon.

Undercutting any gains made through the new parks act is the fact that the province’s parks are enormously underfunded. The government of Ontario contributes only $15 million toward the $68.7 million annual operating costs of provincial parks – the lowest as a percentage of a province’s operating budget in Canada. (In contrast, the Province of Ontario spends $75 million a year to maintain 62,000 kilometres of logging roads.) User fees cover the balance, generating $46 million annually. Furthermore, parks generate another $390 million in economic activity in surrounding communities. As for the 257 “paper parks” – parks that lack an official management plan and so do not collect visitor fees – ecological provisions such as prescribed road closures, habitat rehabilitation and user regulations are non-existent.

On a hot July day I drive 80 kilometres along the Trans- Canada Highway south of Wawa to take a closer look at Sand River Road. After ducking under the gate that keeps unauthorized vehicles out, I bike into the backcountry of Lake Superior Provincial Park. I cycle through a transitional forest of birch, maple and balsam fir, stopping to admire 30-metre-tall old-growth white pines that dwarf the second-growth canopy. Streams chatter through shiny new culverts; rusty old ones have been left like decomposing skeletons at the road margins. A white-throated sparrow calls out, perhaps in a last-ditch effort to find a mate. At several points I swerve to miss fur-laden wolf scat.