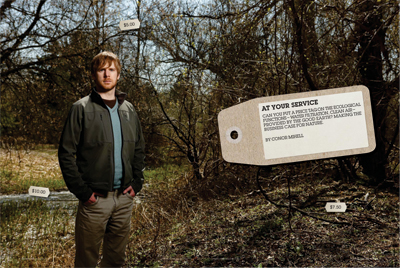 Can you put a price tag on the ecological functions – water filtration, clean air – provided by the good earth? Making the business case for nature.

Sometimes we need to be reminded that the most important things in life are nearly impossible to replicate. Almost 20 years have passed since scientists were given a blank cheque to create a miniature, self-regulating world on 1.25 hectares of land in Arizona. Their challenge was to manufacture a closed system in which eight people could live for two years without external support.  The scientists ended up spending $200 million (U.S.) packing the glass-domed Biosphere II with a variety of engineered ecosystems – desert, tropical rainforest, savannah, wetland, working farm, ocean and coral reef. They imported pollinator insects, fish, reptiles and mammals chosen on the basis of their ecological functions.

The results were humbling: Oxygen content in the dome plummeted to high-alpine levels and carbon dioxide soared; 19 of 25 vertebrate species became extinct; pollinators died off and were replaced by a rampant population of cockroaches. The project was called off after 18 months.

An experiment like Biosphere II highlights the priceless role nature plays in maintaining life on earth. Yet we remain largely complacent about the free but essential services that healthy, intact ecosystems provide. Each year, Canadians use 3.4 times their share of the earth’s annual allotment of life-sustaining functions, such as carbon sequestration, flood control, groundwater recharge, disease and pest control, and pollination – not to mention nature’s better-known commodities, such as food, wood fibre and fresh water, and services, like outdoor recreation. What’s more, we sabotage these so-called ecological services by choosing to pave wetlands, raze forests, bore into the earth in search of minerals and spew toxins into the atmosphere. Jeff Wilson, an environmental economist at Mississauga-based Credit Valley Conservation (CVC), notes that governments typically don’t account for the economic value of preserving natural functions when weighing the pros and cons of a housing development or highway expansion. Worse, gross domestic product (GDP) – our primary means of measuring economic growth – treats resource depletion as a positive factor in the economy.

As the earth’s ability to sustain us rapidly deteriorates, ecologists and economists are starting to draw a direct link between environmental quality and economic stability. This emergent science of “ecosystem valuation” – essentially, putting price tags on ecological functions such as groundwater recharge and habitat for endangered species – is a means of assessing the true costs and benefits of development. A 2009 Ontario Ministry of Natural Resources (MNR) study, for example, valued the “replacement costs” of the benefits derived from southern Ontario ecosystems at a whopping $84.4 billion annually. “Many people value things by attaching dollar figures to them,” says Amber Cowie, program manager for the Greenway Initiative, Ontario Nature’s strategy to establish a network of natural, connected, areas in southern and eastern Ontario. “There’s great potential,” she adds, “in doing this for ecological services to make a stronger case for conservation.”

In accounting terms, the total benefits humans derive from ecological goods and services are known as “natural capital.” For decades, researchers have conducted “willingness to pay” surveys, which ask people what they would be willing to ante up for things like drinking water, the conservation of endangered species and national parks. But the idea of comparing the economic value of preserving natural capital to that of depleting it received little attention until 1997, when Robert Costanza, then at the University of Maryland, now a professor of environmental economics at the University of Vermont, extrapolated survey results and tallied all the earth’s wealth. The result was startling: Costanza pegged the planet’s annual natural capital at $33 trillion (U.S.), or 1.8 times the global GDP, and warned that ignoring the ecological costs in decision-making might compromise human welfare. “As natural capital and ecosystem services become more stressed and more scarce in the future, we can only expect their value to increase,” he concluded.

Costanza’s groundbreaking study spurred more research and the concept of global markets for carbon credits to offset corporate and individual greenhouse gas emissions. Other studies have applied Costanza’s methodology at a more regional scale. In Canada, researchers appraised the annual value of ecological services in southern Ontario’s Greenbelt, which includes the Niagara Escarpment and Oak Ridges Moraine, at $2.6 billion. Another study estimated the value of this nation’s boreal forest at $93 billion per year – more than twice the net return of natural resource extraction in the area.

Last summer, CVC’s Wilson and Mike Kennedy, a senior resource economist at the Calgary-based Pembina Institute, a nongovernmental energy and environmental think tank, completed a similar survey of the Credit River watershed. Their intention was to highlight the economic value of green space in an area that includes some of Ontario’s fastest-growing municipalities. The river and its tributaries’ 1,000-square-kilometre drainage basin is home to more than 750,000 people and stretches from Lake Ontario at Oakville to north of Orangeville. Wilson and Kennedy discovered that wetlands, which make up only 6 percent of the watershed, yielded more than half of the area’s annual $370 million in natural capital, because they provide such essential services as waste treatment, nutrient cycling and water regulation. According to Kennedy, a more tangible benefit of functioning wetlands and forests in the upper watershed is the cheap and clean supply of groundwater. If municipal wells were to be compromised due to development, residents would incur an estimated $100 million per year in infrastructure costs to pump billions of litres of drinking water inland from Lake Ontario.

Ecological services provide direct and indirect benefits to humans. Some of these benefits, such as agricultural products and minerals, are measured by traditional economics; others are rarely assigned economic value.

Ecological services can be local or global. The benefit a wetland provides in the form of flood control in a rainstorm is localized, for instance, while climate regulation through a forest’s absorption of greenhouse gases benefits all humans.

That figure – more than double the town of Orangeville’s 2008 tax revenue – helps explain why the concept of assessing natural capital is becoming more than just an intellectual exercise among environmentalists and municipal planners. According to Nancy Olewiler, a professor of economics at Simon Fraser University in Burnaby, B.C., a greater appreciation of the value of ecological services is pushing officials to sustain agricultural land in the fertile Fraser Valley, just outside of Vancouver. Meanwhile, in southwestern Ontario’s Norfolk County, the pilot Alternative Land Use Services (ALUS) project provides cash incentives for farmers who agree to conserve habitat and restore natural functions such as flood control on otherwise marginal farmland. The government of Prince Edward Island launched a province-wide ALUS program in 2008.

Researchers hope that, in the future, such studies and pilot projects will result in “enlightened economic policy that recognizes that development is not without costs,” says Eric Miller, a senior economist with MNR. The ministry commissioned a natural capital study of its own in 2009 to learn more about the methodology of ecological economics. The study of southern Ontario ecosystems, including biodiversity hot spots such as the Oak Ridges Moraine, Frontenac Arch and Niagara Escarpment, revealed insights similar to those in the Credit Valley report, most notably the value of conserving urban green spaces and protecting “environmental amenities” on city fringes.

A key point these studies highlight is that the costs of depleting our natural capital are ongoing. Wilson and Kennedy estimated that a 10 percent increase in urbanized land in the Credit River watershed would result in $31 million in lost ecological services annually. “So the next question,” says Miller, “is, what are we going to do to make up for what we’re losing in the process of development? Surely, if it’s decided that development is the best economic possibility, then compensation for any losses will be required.”

Miller believes in a future in which the environmental impact of development is offset by mandatory “reinvestments” in conservation initiatives elsewhere – a sort of eco-credit to balance the natural capital budget. This could involve creating markets for things like rehabilitating wetlands and endangered species recovery. It would also require wholesale changes in the way we do business – and how we think about the environment.