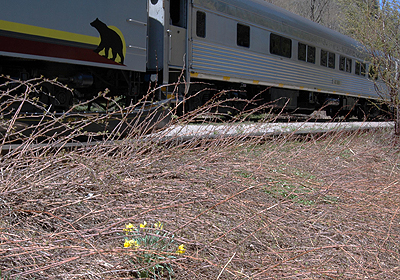 A 300-kilometre-long rail line linking the northern Ontario cities of Sudbury and Sault Ste. Marie was raised from the dead when provincial and federal budgets in late March promised $30 million for long-needed track upgrades. While the antiquated Huron Central Railway is currently only used for transporting freight, rail activists in Sault Ste. Marie are hoping new investment in the line is a harbinger of passenger service in the future. According to Linda Savory-Gordon, an associate professor of social studies at Algoma University in Sault Ste. Marie and co-chair of the Coalition for Algoma Passenger Trains (CAPT), the governmental promises were “essential because otherwise the tracks would’ve likely been torn up and lifted.”

CAPT  has lobbied for enhanced rail service in northern Ontario since 2005. While Savory-Gordon initially got involved to preserve passenger service on the Algoma Central Railway to her rail access-only cottage north of Sault Ste. Marie, she quickly became aware of the environmental and social benefits of mass transit in the sprawling expanse of northern Ontario. Currently, it’s virtually impossible for residents of many northern communities to access the cross-Canada rail corridor without logistical hurdles and extended commutes by automobile. Savory-Gordon is convinced that as oil prices increase, mass transit like rail could be the salvation of rural Ontario.

“We’ve gotten so far away from what rail was originally built for—nation-building,” says Savory-Gordon. Passenger rail service is typically associated with urbanized regions like southern Ontario, she notes, “but it makes even more sense in areas with larger geographical areas. We really need that interconnectivity if people are going to live in a big place like northern Ontario.”

The promise to rehabilitate the Huron Central line was well-received by leaders of communities along the line and industrial producers like Essar Steel Algoma, a Sault Ste. Marie-based steel mill. In an interview with the Sault Star, Essar spokesperson Brenda Stenta said the railway keeps 350 to 400 transport trucks off of highways each week.

Meanwhile, passenger rail in the rest of Ontario and Canada remains light years behind other nations, such as France and Japan, which have embraced high-speed corridors. Canada is the only G8 country without such service. Even the United States has made an effort to support rail transportation with the Obama administration committing billions of dollars to new developments—despite a powerful auto industry lobby arguing otherwise. Currently, Ontario and Quebec are engaged in a research exercise considering the potential of a high-speed passenger railway between Windsor and Quebec. According to Guelph-based high-speed rail advocate Paul Langan at least 10 similar studies have been completed in the past three decades.