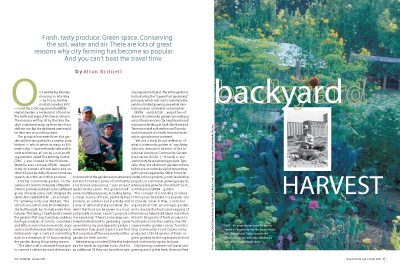 Fresh, tasty produce. Green space. Conserving the soil, water and air. There are lots of great reasons why city farming has become so popular. And you can’t beat the travel time

On a sweltering Monday morning in late May — by 10 a.m., the thermostat is reading 30ºC — I visit the 2,000-square-metre GROW Herbal Garden, a rented plot of land on the northeast edge of Kitchener, Ontario. The mercury will top 30 by the time the day’s volunteers wrap up their two-hour shift at noon. But the dedicated crew would be here rain or scorching shine.

The produce harvested from this garden will be transported to a nearby soup kitchen — which serves as many as 300 meals a day — a price-friendly café and for craft workshops, all run by a non-profit organization called The Working Centre (TWC), also located in the Kitchener-Waterloo area. Last year, GROW reaped some 40 bushels of fresh herbs and another 45-plus bushels of beans, tomatoes, squash, zucchini and other produce.

Another community garden, on the campus of London’s University of Western Ontario, provides sustenance for a different group of needy users: cash-strapped students. Also called G.R.O.W., an acronym for “growing roots over Western,” the school’s eco-action club, EnviroWestern, started the eight-by-15-metre mini-farm last year. This spring, 15 participants sowed the garden’s first crop: tomatoes, radishes, heritage varieties of carrots, cucumbers and lettuce and some more exotic crops such as South American Aztec red spinach. Participants sign a contract committing each to a minimum of 10 hours tending the garden during the growing season.

“The idea to set a schedule for people to commit a certain amount of time was to ensure that the garden was maintained, but also to foster a sense of community and shared experience,” says project leader André Laurin. The garden itself serves multiple purposes, including being a cheap source of fresh, pesticide-free produce, an outdoor social activity and a way of demonstrating to fellow students that food can be grown in a local, sustainable manner. Laurin’s purpose is more personal: “There’s some deep sentimental attachment to gardening. I grew up watching my grandparents garden. I remember how great it was to eat that first cucumber off the vine [and] raid the garden for fresh carrots.”

Members pay a modest $5 fee that helps pay for seeds and garden tools. And for an additional $5 they can have their own one-square-metre plot. The entire garden is laid out using the “square foot gardening” principle, which sets out to maximize the yield in a limited growing area while minimizing labour and water consumption.

GROW and G.R.O.W. are just two of dozens of community gardens sprouting up across the province in city neighbourhoods in places as far-flung as Sault Ste. Marie and Timmins as well as Hamilton and Toronto, and all are part of a North America-wide urban agriculture movement.

“We use a fairly broad definition of what a community garden is,” says Betsy Johnson, executive director of the binational American Community Garden Association (ACGA). “It really is any community based growing project. Typically, they are allotment gardens where folks have an individual plot where they get to grow vegetables. Other forms [include] school gardens, youth leadership projects, or communal growing projects where people grow for a food bank” such as Kitchener’s GROW garden.

The concept of providing produce to those less fortunate is a popular one in Canada. Grow A Row, a national organization that encourages gardeners to donate the fruits (and veggies) of their labour, helped distribute more than 400,000 kilograms of fresh produce to food banks across the country. One 750- square-metre garden run by Toronto’s Stop Community Food Centre alone produced 1,180 kilograms of fresh, organic goodies for the organization’s food bank and meal program last year.

City farming conserves soil, water and green space. It yields fresh, chemical-free produce and a high degree of personal satisfaction. Chuck Wright, a recent Wilfrid Laurier University graduate, volunteers for TWC one day a week as part of an internship he is completing for the Quaker-run Canadian Friends Service Committee. “It’s definitely a change from the office,” says the 25-year-old who, with his beard and straw hat, could pass for one of the local Mennonite farmers. “Food-growing is a very practical skill to have and something that has been lost among [most] people living in the city. I’ve learned about various herbs and what they’re used for and hope through experiences like these I will eventually develop the skills I need to have a garden of my own.”

To find out more about community gardening, take a look at these resources:

City Farmer – Canada’s Office of Urban Agriculture This Vancouver-based group has a wealth of knowledge on a wide range of urban agricultural subjects. Cityfarmer.org; 604-685-5832

Grow A Row Founded in Winnipeg in 1986, but now based in Toronto, this nationwide program encourages gardeners to donate excess produce to local food banks. Growarow.org; 416-535-0240

The Working Centre This Kitchener-Waterloo-based nonprofit organization hosts a wide range of community projects, including the GROW Herbal Garden and the Queen Street Commons Café. Theworkingcentre.org; 519-743-1151