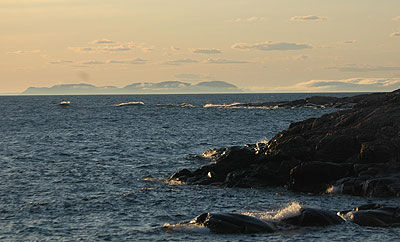 In April, Minnesota-based naturalists Kate Crowley and Mike Link began a five-month, 2,575-kilometre walk around Lake Superior. Their goal: to capture an ecological snapshot of the lake’s perimeter in 2010—“baseline” information that will no doubt be a valuable tool in measuring changes over time. To achieve their goal, the hikers are snapping photos every five kilometres of lakeshore, recording wildlife sightings and noting vegetation patterns along the coast. Their “Full Circle Superior” expedition is happening in the nick of time. As the hikers were making their way along the Ontario portion of the coast, scientists were predicting that Lake Superior’s notoriously chilly waters could reach record-high temperatures this summer—a sure sign of a warming climate and a harbinger of countless other changes in the lake’s ecology.

University of Minnesota-Duluth physicist Jay Austin’s research has shown that the lake has warmed 2.5 degrees Celsius over the past 25 years, a startling change that’s more than double the increase in corresponding land temperatures. Austin attributes the warmer water to less winter ice coverage; according to Cameron Davis, a senior adviser to the US Environmental Protection Agency on the Great Lakes, ice cover has decreased by 20 percent over the last 37 years.

A mild winter and early spring have put 2010 water temperatures on pace to match 1998’s record of 20 degrees Celsius. In an article on Scientific American’s website, Austin called this year’s conditions “tremendously anomalous,” ranking “up there with the warmest water we have ever seen, and the warming trend appears to be going on in all of the Great Lakes.”

Time will tell how much longer hikers like Crowley and Link will be able to observe the unique communities of fragile vegetation that flourish along the lakeshore because of Superior’s cool microclimate. So-called “arctic-alpine disjuncts”—cactus-like saxifrages, wispy cinquefoils and rock-hugging, carnivorous butterworts that are typically found at in the Canadian arctic or at alpine elevations—have persisted here since the last ice age. In the past 20 years, however, University of Guelph botanists have noticed a significant decrease in their incidence on Lake Superior’s coast.

Meanwhile, researchers suggest a warmer Lake Superior could be more hospital to exotic species like sea lamprey and zebra mussels. Sea lamprey were brought to the lake in the ballast water of ocean-going vessels in the 1950s, immediately causing significant reductions in lake trout populations, upon which they prey. University of Wisconsin zoologist James Pritchell told Scientific American that the Great Lakes sea lamprey population, currently moderated by chemical abatement programs, may become more rampant in warmer waters.

While Crowley and Link admit to always having had a “magnetic attraction to Lake Superior,” the couple says the journey has made them more aware of the lake’s fragility. “The lake is a sentinel of change,” says Link. On their website, www.fullcirclesuperior.org, the couple has highlighted other threats to Lake Superior—from the impacts of lower water levels (a phenomenon that’s also attributed to climate change) to the threat of mining in Michigan and quarrying in northern Ontario. “The size of this lake doesn’t make it safe from bad decisions that people make at a local and a global level.”