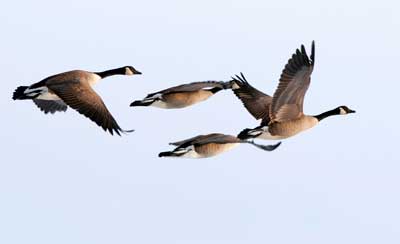 There’s no denying the heroic actions of U.S. Airways pilot Chesley “Sully” Sullenberger when he safely landed his powerless plane in the Hudson River a year ago [www.vanityfair.com/style/features/2009/06/us_airways200906], saving the lives of all 155 passengers and crew.

But it’s worth pointing out that not all souls survived the incident. The terrifying chain of events started about 3,000 feet over the Bronx, N.Y., when Sullenberger’s Airbus A320 collided with a flock of Canada geese flying in V-formation. Several birds were ingested into the plane’s two engines, knocking both out and turning Flight 1549 into a 70,000-kg glider.

It’s not known precisely how many geese were killed in the crash, but you can add them to the tens – if not hundreds – of thousands of birds and other animals killed in collisions with aircraft large and small around the world every year.

In 2008, the U.S. Federal Aviation Administration [https://wildlife-mitigation.tc.faa.gov/wildlife/default.aspx] received reports of 7,516 wildlife strikes with civilian aircraft, while estimating that only 20 percent of such impacts are reported. That’s an average of more than 20 a day, and it doesn’t include U.S. military aircraft. (Transport Canada stats from the 1990s show an average of about 750 collisions annually.)

Birds are far and away the most common victims, with most impacts occurring during take off and landing, but collisions with bats, foxes, moose and even turtles have been reported.

With that in mind, airports use both passive measures, like maintaining buffers between their runways and cropland or garbage dumps – both known to attract flocks of birds – and actively (sometimes aggressively) landscaping their properties, including clear-cutting woodlots to remove nesting and grazing lands.

Other techniques for discouraging wildlife from hanging around runways include noise cannons, pyrotechnics, playing prerecorded avian distress calls and using trained border collies and falcons to frighten birds away. Of course, none of these measures would have helped in the case of Flight 1549: the collision occurred far from the airport.

If there’s any silver lining to be found, it may be in a variation on the creative use of animal corpses that researchers in New Zealand have come up with. Comparing local road-kill tallies dating back to 1949 [www.royalsociety.org.nz/Site/publish/Journals/nzjz/2009/015.aspx], a team at the Victoria University of Wellington have concluded that “regular counts taken at annual intervals over the same roads is a useful method for gathering information about the changing distribution and relative abundance of certain animals.”

Perhaps Transport Canada’s data could be used to help track the migration and populations of commonly involved species. Then again, it would likely be a marketing nightmare trying to promote the annual Dead Bird Count.