November 2, 2015Written by ON Nature
3 Comments

• Medium-sized songbird inhabiting grasslands, pastures and hayfields
• In summer, male is black with a white back and yellow collar; female is tan colour with black stripes
• Named for its bubbling musical song
• Builds small nest on the ground in dense grasses; both parents tend young, sometimes with the help of a third bird

• Breeds across North America
• Widely distributed throughout most of Ontario south of the boreal forest, where suitable habitat exists

Over the last 10 years, the bobolink’s population in Ontario decreased by 33 percent. 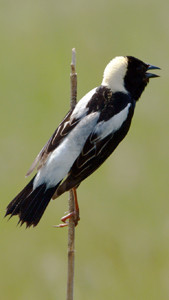