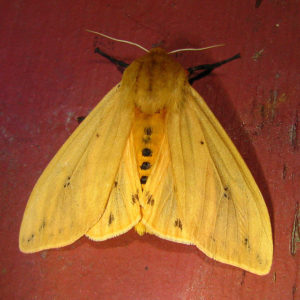 Description: Adults – mid-sized, abdomen light orange with a row of black spots on the dorsal side, forewings are pointed, orange-yellow to orange-brown with slight light brown lines and with darker spots near the apex, hindwings paler with variable dark spots towards outer edges; wingspan 4.5 – 6.5 cm
Larvae: fuzzy in appearance, this caterpillar is up to 5 cm in length, covered with thick bristles, orange across the middle and black at either end; often curls into a ball when disturbed
Foodplants: Larvae – many low growing herbaceous and woody plants such as asters, dandelion, plantain, grass, nettle, clover, meadowsweet
Adults – a variety of flowers
Habitat: fields, bottomlands, forests
Range: across Canada
Overwintering: as a nearly full-grown caterpillar under leaf litter and pupates in spring
True fact: The relative amount of black and orange colours on a woolly bear caterpillar is the result of ageing. With each successive moulting, less and less of the caterpillar is black and more of it is orange. Unfortunately, the woolly bear’s reputation as a prognosticator of winter’s severity, based on the presence of a greater amount of black to orange or vice-versa, is mythical. A woolly bear with more black is just a young caterpillar and not a prediction for a harsh winter. 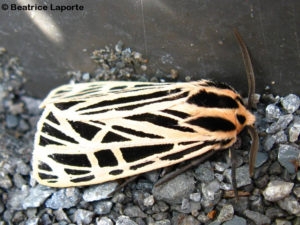 Grammia virgo
Family: Arctiidae
Description: Adults – one of the larger tiger moths, abdomen red, forewings black with intersecting yellow-orange lines, hindwings red-orange with large black spots in median areas and edges; wingspan 4.5 – 7 cm
Larvae: up to 5.5 cm, covered with black, bristly hairs and with orange spiracles
Foodplants: Larvae – prefers chenopodium species such as lamb’s quarters, bedstraws, clover, plantains, lettuce and cabbage
Adults – a variety of flowers
Habitat: open areas such as meadows, pastures and edges of wetlands
Range: Manitoba eastward to Newfoundland, south to Florida west across to Kansas
Overwintering: as mature caterpillars
True fact: Adult virgin tiger moths resort to chemical warfare for protection from predators.  When disturbed this moth exudes from the corners of its thorax frothy bubbles containing alkaloids which originate from the plants consumed when it was a caterpillar. 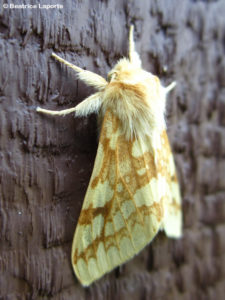 Description: Adults – a mid-sized moth, wingspan 3 – 4.3 cm, forewings rich yellow colour with 4 brown bands usually merging across the wings and with a partial 5th brown band near the wing base, hindwings  pale yellow and lacking any marks
Larvae: covered with stiff bristles, this caterpillar is black at the ends and orange in the middle section, black tufts arise from the orange mid section while longer white lashes protrude from the ends
Foodplants: woody shrubs and trees including maples, birches, oaks, poplars, willows and alders
Habitat: forests, edges of streams, rivers and northern wetlands
Range: from Labrador west across Canada, south to North Carolina
Overwintering: As a pupa (cocoon)
True fact: The stiff bristles make this caterpillar difficult for predatory birds to swallow. 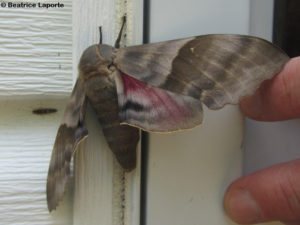 Description: Adults – a large-bodied moth, wingspan 10 – 12 cm,  forewings on upper sides with wide swaths of brown and gray and with the basal areas being lighter in colour, outer edges scalloped, hindwings gray with a large red patch and with an inward pointing triangular blue-black patch nearest the lower outer margin
Larvae: a pale blue-green thick-looking caterpillar, sometimes brown, 7 oblique white lines, the last one being prominent, along the sides of abdomen, small white granules ring each segment, horn short on the posterior end
Foodplants: poplars and willows
Habitat: woodlands and forest edges especially along streams, ponds and lakes
Range: across Canada south to Florida and Texas
Overwintering: pupates on ground and overwinters in shallow burrows
True fact: The caterpillar of the big poplar sphinx chews through the petioles of damaged leaves, dropping them to the ground. This behaviour protects the caterpillar’s whereabouts from birds that tend to use damaged leaves to find tasty caterpillars. 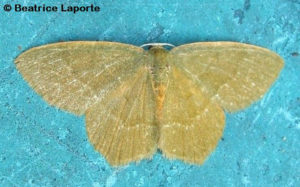 Description: Adults – small slender body with broad wings, wingspan 1.6 – 3.1 cm, colour varies from sage green to orange-yellow, with 2 finely dotted white lines transversing the wings, outer margin of hindwings not pointed but more square shaped
Larvae: a slender green caterpillar with a brownish pink stripe extending over the length of its back, possesses fewer abdominal prolegs (graspers) than other moth families, commonly called an inchworm
Foodplants: woody plants such as blueberries, oaks, birches, basswood, ironwood, ninebark and willow
Habitat: forests and woodland edges
Range: southern Canada south to Florida
Overwintering: possibly as a pupa in light cocoons among leaf litter
True fact: Like many other species in the family Geometridae, this inchworm mimics a twig when disturbed by grasping a branch with its hind prolegs and holding its body outwards. Movement for an inchworm is a looping gait. The front of its body extends as far forward as possible followed by the rear portion raising the mid section into a loop. 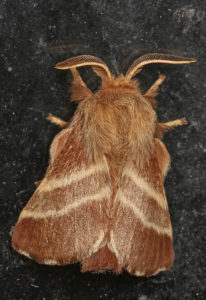 Description: Adults – a mid-sized moth with a stubby looking body, wingspan 2.2 – 4.4 cm, body and wings are a rich light brown to red brown colour, forewings with 2 white lines
Larvae: a colourful caterpillar with black stripes lining a bold white stripe down the middle of the back, its sides are blue with orange stripes, each segment of the body has a black and white eyespot; orange-yellow hairs project from the sides
Foodplants: cherries, hawthorns, apples, pears and other fruit trees
Habitat: forests, woodland edges, orchards and gardens
Range: eastern half of southern Canada south to Florida
Overwintering: in eggs which are laid in masses on larval food plants
True fact: Eastern tent caterpillars are well known for their tents. In spring the caterpillars spin communal nests in crotches of 2 or more branches of a host tree or shrub. The caterpillars feed on young leaves outside of the nest and return to the protection of their refuge for digestion. On cold spring days, the tents act like a greenhouse, raising the internal temperature of the nest above that outside. Nests sighted in late summer and early autumn are not those of eastern tent caterpillars but instead of another species, the fall webworm, Hyphantria cunea. 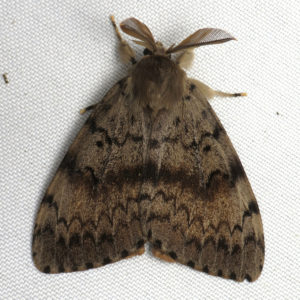 Wingspan: 30-40 mm (male), 55 – 65mm (female)
Description: male is much smaller and darker in colour. Wings off-white in female with scalloped grey lines and some dark spots; male forewing brownish with dark notched marks, hindwing reddish to yellowish brown.
Larvae: up to 75 mm; dark with many tufts of “hair,” large blue spots on top and side near head, further back these spots are red.
Range: throughout southern Ontario, north to Lake Superior
Habitat: widespread
Larval foodplants: prefers oaks, but will feed on a wide range of trees and shrubs.
Flight season: adults emerge mid-summer; female’s abdomen swollen with eggs so she cannot fly and instead remains near emergence site and attracts males with emitted pheromones
Overwintering stage: eggs laid in furry clusters on tree bark
True fact: Gypsy moths were deliberately introduced to North America from Europe around 1869 to be bred in captivity for their silk. This effort failed, but escaped gypsy moths spread widely to become pests by defoliating trees.