When done properly, a carbon-tax system could be the best approach to cutting emissions. As long as you’re not afraid of the T-word 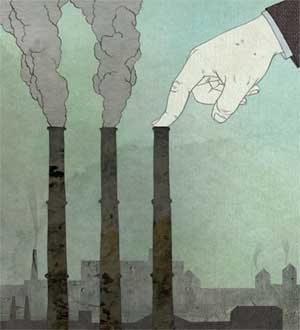 To o the relief of environmentalists, we’ve reached a stage where, for the most part, all political parties – provincial, federal, even international – agree that we need to start seriously cutting carbon emissions. But before we throw the 100-percent post-consumer tickertape parade, we need to deal with the complicated question of how to cut emissions. Two approaches have been put forward to help us face our inconvenient truth.

The first approach is the “cap-and-trade” system, which has support from premiers Dalton McGuinty of Ontario and Jean Charest of Quebec.

Basically, in a cap-and-trade system, a government establishes a ceiling (that’s the “cap”) on how much carbon may be emitted nationally. Using that cap as a guideline, the government sets limits on how much carbon pollution individual corporations will be allowed to emit. Corporations whose emissions are less than than their allowance get credits that they may then sell to corporations that exceed their allowance (that’s the “trade”). The theory is that this newly created financial market will provide corporations with an incentive to reduce emissions in order to earn money selling credits, while corporations that take a long time to adhere to their limit can carry on doing business even if they take a financial hit. Gradually, the caps are lowered.

The disadvantages of this approach are many. A new level of bureaucracy is required to create and regulate the emissions caps and assign the credits and regulate their sales. This approach also requires designing and enforcing a system of allowances for each individual manufacturer on the basis of criteria that need to be determined, which offers plenty of opportunity for lobbyists to get their cuff-linked hands into the process. To the chagrin of many environmentalists, it also enshrines pollution as a property right, recognized in the form of the tradeable credits. There’s one more big disadvantage: no one is sure how, or if, the cap-and-trade system will work. Such a system has been in place in the European Union since 2005. Some corporations have made windfall profits as a result of selling excess credits, yet overall carbon emissions have continued to rise there.

That the cap-and-trade system could be described as a failure has not diminished its popularity. In announcing their scheme, McGuinty and Charest declared that cap-and-trade is the way the world is going and both current U.S. presidential candidates favour such a system. Why is it so popular with politicians? It has the advantage of not imposing directly and immediately an additional cost on consumers – voters who might react negatively if prices go up – and, through its massive cost and call for huge government expansion, it gives the impression of getting things done. That the word “trade” lends it an aura of free-market credibility is icing on the cake.

The second approach is a carbontax system. Under this system the government levies a tax on carbon (either at the source or on emissions). That’s all.

So prices for things dependent on carbon fuels go up, and, consequently, consumers have an incentive to spend their money on alternatives. Corporations, jockeying for competitive advantage, have an incentive to lower their prices by avoiding carbon-dependent technologies. Over time, carbon taxes can be raised gradually, making carbon fuel an ever less attractive option to both consumers and corporations.

The advantage of this system – other than its simplicity – is that it works. Sweden and the Netherlands both introduced carbon taxes in the 1990s and both have drastically cut emissions.

What’s more, carbon taxes need not place a burden on corporations or people. If income and other taxes are cut to correspond with the new carbon taxes, people who spend the same amount on carbon fuels will see their taxes remain the same, at least in the short term. Anyone who takes the opportunity to spend money on greener options will get a tax cut. No new taxes – just a new option about whether to pay them.

The disadvantage? Everyone is afraid of the word “taxes.” Politicians worry that if the price of home heating or gasoline rises, people will get angry even if they receive an income tax cut that compensates for the rise in cost. But the true fear factor should be of a massive new complicated system that won’t work.

Toronto writer Edward Keenan is the city editor of Eye Weekly and a blogger for The Walrus.