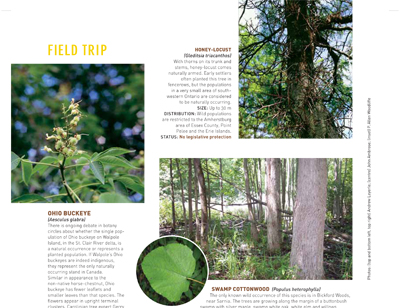 A guide to Ontario’s rarest trees

The loneliest tree in all of Ontario must surely have been the redbud found on Pelee Island in 1892 by botanist John Macoun. Growing on the sandy soils of Fish Point, at the south end of Pelee Island, this single specimen was buffeted by wind and waves, and, by the time Macoun spotted it, half dead. When it finally succumbed, the only known wild representative of this species disappeared from Canada’s flora.

While the lost, last and perhaps only ever redbud is the most extreme example of botany’s stark label “of limited distribution,” a number of other native Ontario trees are in similarly precarious situations. Limited to just a handful of locations, some of these trees are barely holding on with wild populations measured in double digits.

The Ontario trees with the lowest numbers of extant natural stands – trees such as cherry birch, cucumber-tree, Kentucky coffeetree and dwarf hackberry – are found in the Carolinian zone, the most densely populated region of the country, running roughly from Toronto west to Grand Bend, then south to the U.S. border.

Many of these Carolinian trees have always been rare inhabitants of the zone, restricted by climate and habitat to the northern edge of their natural range. It can safely be assumed, however, that all were once more abundant but have become less widespread due to habitat loss and fragmentation, among other factors.

In the last three decades, though, Ontario’s flora has expanded as well, with the discoveries by keen-eyed botanists of swamp cottonwood, pumpkin ash, Shumard oak, scrub or bear oak, and Ohio buckeye. Some, such as pumpkin ash, have turned out to be widespread despite eluding identification for so long, while others, such as Ohio buckeye, exist in a wild population in only one place.

Clearly, Ontario’s forests have yet to yield all their tantalizing secrets. “We’ve been looking at them, but we just haven’t realized what we’re looking at,” says Donald Kirk, a natural heritage ecologist with the Ministry of Natural Resources.

Listed here are Ontario’s rarest naturally occurring native trees and where you can find them – if you know what you’re looking at.

Lorraine Johnson has written numerous books on native plant gardening and environmental issues. Her most recent book is 100 Easy-to-Grow Native Plants for Canadian Gardens. She is the editor of a collection of essays on Carolinian Canada, to be published in 2007.

The showy yellow-green flowers of the cucumber-tree, also called cucumber magnolia, are intriguingly adaptive: the female organs (the stigmas) of the flowers mature and become unreceptive to pollen before the male organs (the anthers) have shed their pollen; hence, the tree requires pollination assistance. Enter a beetle, which gets trapped inside the flower during its female stage. According to University of Guelph biologist Peter Kevan, the inside surface of the petals is covered with microscopic wax rollers that cause the beetle to fall back into the flower every time it tries to escape, thus causing it to brush against the stigmas with each hapless tumble. When the pollen is finally released and the petals open, the beetle, now dusted with pollen, is free to find and cross-pollinate another tree’s flowers.

Distribution: Occurs in only two areas of Ontario: southwest of Simcoe in Norfolk County and in the Town of Pelham in the Regional Municipality of Niagara. With just 12 extant populations, the total number of known naturally occurring trees and saplings is currently 283.

Only one population of cherry birch trees occurs naturally in the province, and all 14 of those trees can be found near the Lake Ontario shore at the mouth of 15 and 16 Mile creeks, west of St. Catharines. Also called sweet birch or black birch, the tree produces abundant sap that can be boiled into syrup or made into birch beer.

Cherry birch grows on moist, well-drained soils, though also on rocky shallow soils. In Ontario, it is found with upland hardwoods such as red oak, white oak and sugar maple, and eastern hemlock. Cherry birch can attain a surprisingly ripe old age (for birches) of 200 years or more.

Distribution: Only one natural population in Canada, in the Niagara Region, west of St. Catharines

Status: No legislative protection, though the Committee on the Status of Endangered Wildlife in Canada (COSEWIC) designation (Endangered) is pending