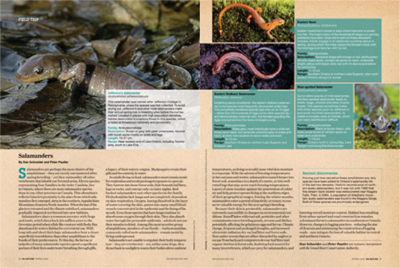 by Dan Schneider and Peter Pautler

Salamanders are perhaps the most elusive of the amphibians – they are rarely encountered after spring breeding – yet they outnumber all other vertebrates that inhabit our forested areas. Eleven species, representing four families in the order Caudata, live in Ontario, where there are more salamander species than in any other province in Canada. This abundance reflects Ontario’s proximity to the place from which salamanders first emerged, deep in the southern Appalachian Mountains of eastern North America. When the last of the glaciers retreated and the climate stabilized, salamanders gradually migrated northward into new habitats.

LIFE CYCLES
In Ontario, salamander life cycles follow three patterns. The first is a typical amphibian life cycle, in which the species makes an annual pilgrimage to open water in spring to reproduce. The eggs, either laid singly or in clusters and numbering from a dozen to hundreds, hatch into tiny larvae with external, feathery gills attached to both sides of the neck, and fins on the tail to aid in swimming. When the larvae metamorphose into adults, the gills are absorbed into the body and the breathing apparatus changes from gills to lungs, except in the case of the lungless salamanders, whose oxygen transfer occurs through the skin.
Notable exceptions to this pattern exist, however. Mudpuppies have abandoned a land stage and retain their gills throughout their wholly aquatic life. Eastern redbacked salamanders, on the other hand, are completely terrestrial. This species suspends its eggs in clusters from stalks extending from the “roof” of a stump cavity or other opening. The young hatch in late summer or fall, having completed their larval stage within the egg.

While for the most part the life cycle of the eastern newt follows the typical life cycle for an amphibious salamander, it has an interesting twist: this species has a one-to three-year terrestrial immature (eft) stage, and then returns to water as an adult to become permanently aquatic. At this stage, the eastern newt retains its lungs and has to gulp air from the surface.

Salamanders share a common ancestry with frogs and toads, which dates back 360 million years to the Devonian period when a fish-like creature with fleshy fins abandoned its watery habitat for a terrestrial one. With long tails and short thick legs, salamanders bear a closer superficial resemblance than other amphibians to the fossils of their predecessors. To this day, the larvae or tadpoles of many salamander species spend a significant portion of their lives underwater breathing through gills, a legacy of their watery origins. Mudpuppies retain their gills and live entirely in water.

As adults living on land, salamanders must remain moist for respiration and avoid prolonged exposure to open air. They burrow into loose forest soils, hide beneath leaf litter, logs or rocks, and emerge only on rainy nights. Redbacked salamanders and other species in the family Plethodontidae lack lungs and are completely dependent on skin respiration. Oxygen, having dissolved in the layer of water covering the skin, passes into many small blood vessels concentrated in the epidermis and the lining of the mouth. Even those species that have lungs continue to absorb some oxygen through their skin. They also absorb water through the permeable epidermis – adults do not use their mouths to drink. Among this most secretive group of amphibians, members of one family – Ambystomatidae, commonly called mole salamanders – remain moist by living underground.

Salamanders are unable to regulate their body temperature – they are ectothermic – yet, unlike some frogs, they do not bask in sunlight to warm their bodies above ambient temperatures, as doing so would cause vital skin moisture to evaporate. With the advent of freezing temperatures in late autumn and winter, salamanders tunnel deeper into forest soil, sometimes to a depth of a metre, or into wellrotted logs that may never reach freezing temperatures. Layers of snow insulate against the penetration of colder air and help protect species living at the northern edges of their geographical ranges. During the winter months, salamanders enter a period of inactivity, or torpor, to conserve valuable energy for the next spring’s breeding.

Because their skin is permeable, salamanders are extremely susceptible to changes in environmental conditions. Runoff laden with road salt, pesticides and other contaminants enters breeding ponds, streams and ditches, potentially affecting the gelatinous eggs and larvae. Climate change, frequent and prolonged droughts, and increased ultraviolet radiation dry out leaf litter and forest soils. Non-native worms that are either discarded by anglers or escape from backyard composters devour leaf litter and organic detritus in forest soils, depleting food sources for many invertebrates, which are prey for salamanders, and lowering overall moisture content. Habitat loss resulting from urban sprawl and road construction remains a dominant threat to salamanders in southwestern Ontario. However, changes in logging practices – reducing the size of clearcuts and minimizing the construction of logging roads – may mitigate the loss of valuable habitat in central and northern Ontario.

This salamander was named after Jefferson College in Pennsylvania, where the species was first collected. To avoid drying out, Jefferson’s and other mole salamanders make their annual spring trek to breeding sites before the ice has melted. Located in places with high population densities, habitat destruction is a serious threat to this species, which is listed as threatened nationally and provincially.
Family: Ambystomatidae
Description: Brown or grey with paler undersides, flecked with bluish spots mostly on sides and legs
Length: 10-21 cm
Range: Near western end of Lake Ontario, including Toronto area, south to Lake Erie

Eastern newts live in ponds or bays where there are no predatory fish. The bright colour of the terrestrial eft stage is a warning; predators have been observed to spit out these distasteful morsels. Adults engage in an elaborate courtship dance in spring, during which the male clasps the female’s body with his hind legs and fans her with his tail.
Family: Salamandridae
Description: Terrestrial stage (eft) orange or red; adults greenish with black spots, except red spots on back; underside bright yellow with black dots; tail with fin above and below for swimming
Length: 7-14 cm
Range: Southern Ontario to northern Lake Superior; also northwestern Ontario along U.S. border

Inhabiting damp woodlands, the eastern redback salamander is the species most frequently discovered under logs. This completely terrestrial species lays only six to 10 eggs – rather than the hundreds of eggs some other species lay – and demonstrates maternal care, the females guarding the eggs and sometimes the newly emerged young.
Family: Plethodontidae
Description: Sides grey; most individuals have a wide red stripe down back, but some are uniformly grey on sides and back; another rare variation is red on sides and back
Length: 6-13 cm
Range: Southern Ontario to northern Lake Superior and Kirkland Lake

Our smallest species of mole salamander, the blue-spotted salamander feeds on snails, slugs, crickets and other invertebrates. This species sometimes mates with other species,such as Jefferson’s and small-mouthed salamanders, to create a complex array of hybrids, which can make identification difficult.
Family: Ambystomatidae
Description: Black or bluish-black, with many small bluish or whitish spots on sides and undersides
Length: 7-13 cm
Range: Ontario north to James Bay, Lake Nipigon and along Manitoba border

Mudpuppies live in rivers and lakes throughout their entirely aquatic life. They hide in thick vegetation, emerging at night to feed on tadpoles, fish, crayfish and other invertebrates.
Family: Proteidae
Description: Feathery gills on either side of flattened head; vertically flattened tail for swimming; body brown to greyish brown with black spots; four toes on front and back feet
Length: 20-45 cm (Canada’s largest salamander)
Range: Southern Ontario north to Ottawa and eastern Lake Superior; also northwestern Ontario along U.S. border from Lake Superior to Manitoba

In early spring, usually during the first warm rain, spotted and other mole salamanders suddenly become obvious when they leave their nearly invisible hibernating sites and migrate to shallow woodland pools to breed. The female lays about 150 eggs in tight clumps that look like the egg masses of some frogs.
Family: Ambystomatidae
Description: Grey beneath; black with bright yellow or orange spots on back and tail
Length: 15-25 cm
Range: Southern and central Ontario north to Timmins area and Lake Nipigon

The four-toed salamander inhabits boggy areas and lays its eggs on moss overhanging small pools. On hatching, the larvae drop or squirm into water to complete the larval development. Like other lungless salamanders, this species can shed its tail easily to distract predators.
Family: Plethodontidae
Description: Greyish to reddish brown back; shiny white belly with black dots; four toes on hind feet (all other Ontario salamanders except mudpuppy have five)
Length: 5-10 cm
Range: Southwestern Ontario from Lake Erie to Georgian Bay and north to Sault Ste. Marie and Timmins

Like Ontario’s other lungless salamanders, this species absorbs oxygen through its skin and mouth. The two-lined salamander inhabits shorelines of small streams and often swims. The female lays its eggs under rocks or other objects in moving water.
Family: Plethodontidae
Description: Yellow underneath; yellowish-brown on back, with two dark lines, which may be obscured somewhat on darker individuals, running longitudinally down the back
Length: 6-12 cm
Range: Kingston to southern Georgian Bay north to Sudbury and along Quebec border to near James Bay