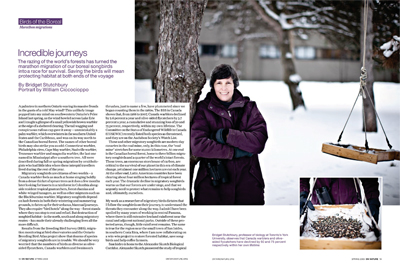 The razing of the world’s forests has turned the marathon migration of our boreal songbirds into a race for survival. Saving the birds will mean protecting habitat at both ends of the voyage

A palm tree in northern Ontario waving its massive fronds in the gusts of a cold May wind? This unlikely image popped into my mind on southwestern Ontario’s Pelee Island last spring, as the wind howled across Lake Erie and I caught a glimpse of a small yellowish brown warbler at the edge of a sheltered clearing. The tail wagging and conspicuous rufous cap gave it away – unmistakably a palm warbler, which overwinters in the southern United States and the Caribbean, and was on its way north to the Canadian boreal forest. The names of other boreal birds may also strike you as odd: Connecticut warbler, Philadelphia vireo, Cape May warbler, Nashville warbler, Tennessee warbler and magnolia warbler, the last one named in Mississippi after a southern tree. All were described during fall or spring migration by ornithologists who had little idea where these intrepid travellers lived during the rest of the year.

Migratory songbirds are citizens of two worlds – a Canada warbler feels as much at home singing boldly from a dense thicket of spruce trees as it does a few months later looking for insects in a rainforest in Colombia alongside resident tropical gnatcatchers, forest elaenias and white-winged tanagers, as well as other migrants such as the Blackburnian warbler. Migratory songbirds depend on lush forests in both their wintering and summering grounds, to fatten up for their arduous, biannual journeys. They also require “bird hotels” along the way – forest stands where they can stop to rest and refuel. But destruction of songbird habitat – in the north, south and along migratory routes – has made their already challenging lives all the more difficult.

Results from the Breeding Bird Survey (BBS), migration monitoring at bird observatories and the Ontario Breeding Bird Atlas project show that dozens of species of migratory songbirds are in trouble. We should be very worried that the numbers of birds as diverse as olivesided flycatchers, Canada warblers and Swainson’s thrushes, just to name a few, have plummeted since we began counting them in the 1960s. The BBS in Canada shows that, from 1966 to 2007, Canada warblers declined by 2.6 percent a year and olive-sided flycatchers by 3.7 percent a year, a cumulative and stunning loss of 50 and 75 percent, respectively, within my own lifetime. The Committee on the Status of Endangered Wildlife in Canada (COSEWIC) recently listed both species as threatened, and they are on the Audubon Society’s Watch List.

These and other migratory songbirds are modern-day canaries in the coal mine, only, in this case, the “coal mine” stretches for some 10,000 kilometres. At one end is the Canadian boreal forest, home to three billion migratory songbirds and a quarter of the world’s intact forests. Those trees, an enormous storehouse of carbon, are critical to the survival of our planet in this era of climate change, yet almost one million hectares are cut each year. At the other end, Latin American countries have been clearing about four million hectares of tropical forest each year. The dramatic decline in migratory songbirds warns us that our forests are under siege, and that we urgently need to protect what remains to help songbirds and, ultimately, ourselves.

My work as a researcher of migratory birds dictates that I follow the songbirds on their journey, to understand the threats they encounter along the way. I admit I have been spoiled by many years of working in central Panama, where there is still extensive lowland rainforest near the canal and adjacent national parks. Outside of these protected areas, though, little rainforest remains. The same is true for the region near the small town of San Isidro, in southern Costa Rica, where I am now collaborating on a win-win project to restore forested habitat, save songbirds and help coffee farmers.

San Isidro is home to the Alexander Skutch Biological Corridor. Alexander Skutch pioneered the study of tropical birds and lived near San Isidro; his former home, Los Cusingos, is now a Neotropical Bird Sanctuary and the site of a migratory bird monitoring program that the Faculty of Environmental Studies at York University and I run. On my first visit to the sanctuary a few years ago, I was surprised to see that Los Cusingos is a small, isolated forest patch surrounded by sugarcane fields and coffee plantations. If you are game for a long, bumpy car ride, twisting past recently cleared forests that are now cattlefilled pastures, you can visit large uncut forests still standing far up the valley in Chirripó National Park and the adjacent Las Nubes Biological Reserve.

For the past three years, local residents, banding experts and York University students have been banding migrants in the Alexander Skutch Biological Corridor. A central figure in this project is coffee grower and naturalist Luis Angel Rojas, who has a small house across the river from Los Cusingos. He became an avid bird lover when binocular-toting students began visiting the forest reserve, and he saw his first field guide to the birds of Costa Rica. Rojas owns one of the few shade-coffee farms in the region and proudly grows his beans under native tropical trees and without pesticides.

We selected netting sites in mature rainforest and coffee plantations so we can find out how migrants use these different habitats and to what extent they hopscotch between isolated patches. About 10 to 15 species common to Ontario’s boreal forest in summer use scattered fragments of habitat in the Skutch corridor, where they fly into the nets hidden among the shrubs and trees. Some species of migrants live here all winter, such as Tennessee warblers and chestnut-sided warblers, but most rely on the remnant forests as bird motels during spring migration. In 2007, we caught only two dozen Swainson’s thrushes in January and February, as few overwinter in the region, but we banded over two hundred individuals in April when migration was in full swing.

But the razing of forests around the Skutch corridor has been both hard on these birds and typical of what has been happening in Latin America. More primary rainforest has been cleared since 1950 than during the entire two hundred years that came before. In countries at the northwestern corner of South America, where many boreal songbirds overwinter, total forest loss stands at 70 percent or more.