• Smallest member of the heron family; brown and beige plumage with large chestnut patches on wings
• Crown and back of males are black but are lighter in females and juveniles
• Throat is light tan with whitish streaks; white belly; legs and beak are bright yellow

The least bittern experienced a decline of about 30 percent in Ontario between 1999 and 2009. 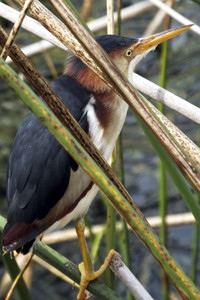