Meet our board: Chris Rathgeber 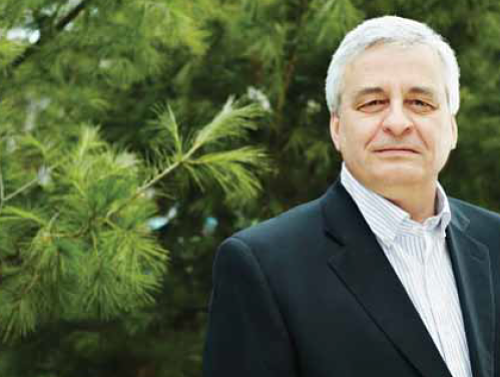 Chris Rathgeber is the secretary/treasurer of Ontario Nature’s board of directors and the chief operating officer of Memofix Hitech Services.

John Hassell How did you first become involved with Ontario Nature?
Chris Rathgeber My wife, who was familiar with the organization from her work in the nonprofit sector, introduced me to Ontario Nature in 2007. I found that my concerns about urban sprawl aligned well with Ontario Nature’s Greenway program. It was a good fit, as I was at a stage in my life where I wanted to give back and Ontario Nature needed my skill set.

JH What initially got you interested in nature?
CR I spent my childhood in Kitimat, in northern British Colombia. My early and fondest memories are of hiking in the area. It’s about the smell, the light, the shadows and the freedom of nature. My parents did shift work, so weekend camping trips were a time when we were all together. In my family, if you were happy, you went for a walk, and if you were troubled, you went for walk. To this day I enjoy hiking, especially on the Bruce Trail.

JH Many farmers have found themselves on the front lines of endangered species protection measures. As the owner of a 41-hectare working farm in Meaford, between Owen Sound and Collingwood, what is your perspective?
CR I start from the premise that most people sincerely want to protect endangered species. So the trick is to find a balance between this lofty goal and people’s need to make a living. With a little compromise and a lot of understanding, we can achieve this balance. There are no simple answers, but we have seen that you cannot shove conservation down people’s throats. To find a solution that works, we must get the process right.

JH How does your environmental ethic connect with your work with Memofix Hitech Services?
CR In general we are good at two of the three Rs: recycling and reducing. We do poorly with the third R: reusing. So it feels good knowing that Memofix repurposes last-generation computers and equipment for clients in ways that help the environment while saving money.

JH What environmental issues in Ontario would you most like to see become prominent in the upcoming provincial election?
CR Wind energy is an incredibly divisive issue in Meaford and many other communities. All of a sudden people who have been neighbours for generations are not speaking to one another. Regardless of where you stand, the process behind increasing Ontario’s wind-energy generation has been flawed. Consultations have been insufficient, leaving many to feel that they have had no say whatsoever on an issue that greatly impacts them. And it is a very emotional issue, as the science on either side is not great. I don’t have the answer, but I suspect we need to look at other models, fix the process and increase our mutual understanding.

Water protection is another critical issue. Living in Toronto, I took water for granted. It was just something I got out of the tap. Now, based on my experience of living off a shore well that is dependent on the surrounding springs, I have grown to appreciate how important it is to maintain clean water sources.