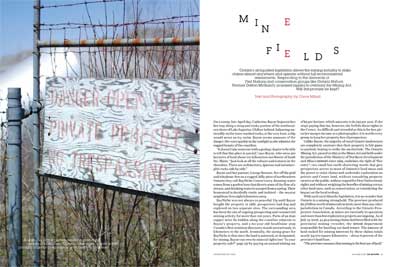 Ontario’s antiquated legislation allows the mining industry to stake claims almost anywhere and operate without full environmental assessments. Responding to the demands of First Nations and conservation groups like Ontario Nature, Premier Dalton McGuinty promised (again) to overhaul the Mining Act. Will this promise be kept?

On a sunny, late April day, Catherine Bayne hopscotches her way along a steep and rocky portion of the northeastern shore of Lake Superior. I follow behind, balancing unsteadily on the wave-washed rocks; at the very least, a slip would mean an icy swim. Bayne seems unaware of the danger. Her eyes sparkle in the sunlight as she admires the rugged beauty of the coastline.

“It doesn’t take someone with a geology degree to be able to tell that this place is special,” says Bayne, who owns 310 hectares of land about 100 kilometres northwest of Sault Ste. Marie. “Just look at all the colours and textures in the shoreline. There are sedimentary, igneous and metamorphic rocks side by side.”

Open-pit: Mineral deposits that are found close to the surface are accessed by removing massive amounts of overburden – sometimes even entire mountaintops. The process creates a crater, frequently of vast proportions. The largest of six pits at the abandoned Adams iron ore mine, located near Kirkland Lake in northeastern Ontario, is more than 1.6 kilometres in diameter and 180 metres deep. The environmental impacts of active open-pit mines, like De Beers’ Victor diamond mine in the James Bay Lowlands, stem from the fact that operations usually extend below the water table and require constant draining, which alters hydrology and pollutes surrounding waterways.
Underground: Most of Ontario’s gold, nickel, cobalt, copper, zinc and platinum reserves are buried deep in the earth’s mantle and are accessed by shaft mining techniques. North America’s deepest mine is located in Timmins, where Xstrata’s Kidd mine extracts copper and zinc at depths of more than 2,600 metres. While underground operations are less destructive than open-pit mining, the process still produces toxic waste materials that must be stored in tailings ponds on the surface.
Quarry: This type of open-pit mine produces aggregates – gravel-like mixes of crushed bedrock, such as limestone, basalt or shale – that are used in the construction of highways and buildings. Proponents apply for a licence to quarry under the Aggregate Resources Act, legislation that is separate from the Mining Act and managed by the Ministry of Natural Resources. The approvals process involves several stages of public consultation and review but still lacks comprehensive environmental assessment.
Conor Mihell

Bayne and her partner, George Browne, live off the grid and telephone-free on a rugged, hilly piece of northeastern Ontario they call BayNiche Conservancy. Running water comes from a garden hose that diverts some of the flow of a stream, and drinking water is scooped from a spring. Their homestead is decidedly rustic and isolated – the nearest neighbour lives eight kilometres away.

BayNiche was not always so peaceful. Up until Bayne bought the property in 1986, prospectors had dug and explored on two separate sites. The surrounding area has been the site of ongoing prospecting and commercial mining activity for more than 100 years. Parts of an 1840 copper mine lie hidden along the coastline adjacent to Bayne’s property, and a 60-year-old headframe atop Canada’s first uranium discovery stands precariously 10 kilometres to the north. Ironically, the saving grace for BayNiche is that since the land is patented, or designated, for mining, Bayne can own its mineral rights (see “Is your property safe?” page 23) by paying an annual mining tax of $4 per hectare, which amounts to $1,243 per year. If she stops paying that tax, however, she forfeits those rights to the Crown. As difficult and stressful as this is for her, given her meagre income as a photographer, it is worth every penny to keep her property free of prospectors.

Unlike Bayne, the majority of rural Ontario landowners are completely unaware that their property is fair game to anybody hoping to strike the motherlode. The Ontario Mining Act, passed in 1892 as the Mines Act and held under the jurisdiction of the Ministry of Northern Development and Mines (MNDM) since 1985, enshrines the right of “free entry”: two small but earth-shattering words that give prospectors access to most of Ontario’s land mass and the power to stake claims and undertake exploration on private and Crown land, without consulting property owners or the public, without regard for First Nation treaty rights and without weighing the benefits of mining versus other land uses, such as conservation, or considering the impact on the local ecology.

With such carte blanche legislation, it is no wonder that Ontario is a mining stronghold. The province produced $9.3 billion worth of minerals in 2006, more than any other jurisdiction in Canada. According to the Ontario Prospectors Association, 41 mines are currently in operation and more than 800 exploration projects are ongoing. As of July 14, 2008, 44,504 mining claims had been filed with the provincial mining recorder, the MNDM department responsible for handing out land tenure. The amount of land staked for mining interests by these claims totals nearly 54,000 square kilometres – about 6 percent of the province’s land base.

“The province assumes that mining is the best use of land,” says Marilyn Crawford, a member of the steering committee of the Bedford Mining Alert, a Kingston area advocacy group. “This old-fashioned, colonial mindset dates back to when the province was trying to populate the north and mining was done with picks and shovels. Today, it amounts to giving our land away.”

Bolstered by skyrocketing metal prices and high demand for diamonds, the mining sector is riding a wave of prosperity. Prospectors with an eye for gold, silver and copper have staked claims on the Crown land surrounding Bayne’s property and throughout northern Ontario, and high uranium prices have brought the abandoned mines of Elliot Lake to the brink of revival. The boom has expanded to the James Bay Lowlands region, where 2,316 claims were hurriedly staked in the six months following last fall’s provincial election, when the Liberal government vowed a modernization of the Mining Act; according to MNDM statistics, this amounts to over 30 percent of all claims that are current in the Far North. And, as with prospecting and mineral exploration, the development of large-scale mines, like De Beers Canada’s Victor mine west of James Bay, continues to pass below the radar of comprehensive environmental assessments.

This flagrant disregard for overall environmental impacts worries many people. Many First Nations communities across the province are calling for a mining moratorium until the provincial legislation is reviewed. Ontario Nature and more than 30 other environmental and human rights organizations back this position, as does Gord Miller, the Environmental Commissioner of Ontario, who encouraged strategic land-use planning in the pristine northern region and modern reforms to the province’s mining regulations in his 2007 annual report, released last December.