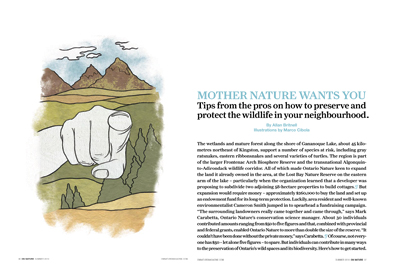 The wetlands and mature forest along the shore of Gananoque Lake, about 45 kilometres northeast of Kingston, support a number of species at risk, including gray ratsnakes, eastern ribbonsnakes and several varieties of turtles. The region is part of the larger Frontenac Arch Biosphere Reserve and the transnational Algonquinto-Adirondack wildlife corridor. All of which made Ontario Nature keen to expand the land it already owned in the area, at the Lost Bay Nature Reserve on the eastern arm of the lake – particularly when the organization learned that a developer was proposing to subdivide two adjoining 58-hectare properties to build cottages.¶ But expansion would require money – approximately $260,000 to buy the land and set up an endowment fund for its long-term protection. Luckily, area resident and well-known environmentalist Cameron Smith jumped in to spearhead a fundraising campaign. “The surrounding landowners really came together and came through,” says Mark Carabetta, Ontario Nature’s conservation science manager. About 30 individuals contributed amounts ranging from $50 to five figures and that, combined with provincial and federal grants, enabled Ontario Nature to more than double the size of the reserve. “It couldn’t have been done without the private money,” says Carabetta. ¶ Of course, not everyone has $50 – let alone five figures – to spare. But individuals can contribute in many ways to the preservation of Ontario’s wild spaces and its biodiversity. Here’s how to get started.

The first step is to find out which areas and species are at risk. One effective way to keep abreast of provincial ecological concerns is to join one of the more than 140 Ontario Nature member groups. Many of these volunteer-based groups closely monitor development proposals, legislation and other issues, and disseminate this information at regular meetings and via newsletters, websites and phone or e-mail alerts. (Find a group near you at www.ontarionature.org.)

If you are up for a little do-it-yourself sleuthing, check out the Ontario government’s Environmental Registry (www.ebr.gov.on.ca), a one-stop spot for monitoring a wide range of activities that have ecological ramifications. The searchable database not only enables users to learn about policies and regulations, it also allows them to add comments directly via an online form. Bone up on the Environmental Bill of Rights on the Environmental Commissioner of Ontario’s website (www.eco.on.ca).

Ontario Nature itself provides a number of ways for keeping tabs on province-wide concerns. You can join the 2,300-member-strong team of Advocates for Nature and receive e-mail “action alerts,” along with recommendations on how individuals can act on them. You can also sign up for e-mail newsletters and, of course, read updates and reports in this magazine.

Politicians have been known, on occasion, to stand by their electioneering promises. Take the case of 92 hectare Scout Valley during the 2006 municipal elections in Orillia, for example.

Prior to the election, council had approved a sewer pipe, which, says Ron Reid, former executive director of the Couchiching Conservancy, “basically ran right down the heart of the valley.”

During the campaign, the public outcry against the decision was loud and clear. Mayor Ron Stevens promised to negotiate a conservation easement on the property if reelected and, shortly after his successful campaign, made good on that promise. The Couchiching Conservancy now holds a 99-year easement on the land.

“It’s a really good example of the democratic process in action,” says Reid. “It was the people saying, ‘We don’t like what you’re doing here’ and the politicians listening and responding.”

When you are facing off against developers intent on paving your local piece of paradise, realizing that you are up against entire teams of lawyers and lobbyists can be daunting. But you have a number of ways to communicate with your elected officials – and many of them will actually listen. Getting their attention, though, requires knowing what to say, and when and how to say it.

In many cases, the effort required to get signatures on a petition outweighs the value of the document. “I hate petitions,” says Ontario’s Minister of Natural Resources Linda Jeffrey. “Most of the time, people have no idea why they’re signing a petition, and [the issues] are often worded in such a way that they’re inflammatory.” That said, a critical mass of legitimate signatures on a petition or correspondence from constituents will be documented by the ministry in a “House Book note,” which compiles information on a topic for politicians and bureaucrats to review.

Still, a passionate personal plea will often be more effective. “People coming in to see me in my constituency office or writing a personal letter weigh a lot in my evaluation of an issue,” says Jeffrey. During legislative breaks, MPs and MPPs generally spend their time at their local offices or attending events in their ridings. (Calendars of when the two legislative bodies are in session are posted on the Queen’s Park and Parliament Hill websites: www.ontla.on.ca and www.parl.gc.ca.) Note that the provincial legislature sits Monday to Thursday. That leaves Fridays open for MPPs to book appointments in their riding offices.

Take advantage of those opportunities. Lobbyists get to know – and be known by – politicians on a first-name basis. You can too, by meeting with your elected representatives before you have a bee in your bonnet. A friendly visit every few months will go a long way toward establishing your credibility as an actively concerned constituent with both the elected officials and – perhaps more importantly – their staffs, who act as gatekeepers. Although passion is important, make sure that reasoned discussion prevails.

Like a good Boy Scout, be prepared before you head into a meeting. Do some research on the politician with whom you are going to meet. Has he or she supported (or adamantly opposed) a similar project in the past? If you want to discuss a specific concern, compile a concise one- or two-page overview to give to the politician (anything longer may get handed off to a flunky).

Do not be shy about asking for help. Inquire, for example, whether some pending infrastructure funding might become available for your cause, and whether the person has heard from like-minded groups with which yours could combine forces. “We all know there are scarce dollars. If there’s a way to put two or three groups together so there’s something they can all benefit from, we all win,” says Jeffrey.

Finally, do not leave the meeting without asking for something in return. A letter of support or a promise to draft a response to your concerns will ensure that your issue stays on the agenda.

Early last year, Ontario MPPs were feeling the love from an unlikely group of constituents. Around Valentine’s Day, they received punny greetings – “You’ve turned my head,” quipped a barn owl on one – purportedly from animals worried they would be left out in the cold by the province’s Endangered Species Act (ESA). “We wanted to have a creative way to get ministers and MPPs to remember that the ESA needed to be implemented in a really strong way,” says Amber Cowie, Ontario Nature’s Greenway program manager, who spearheaded the campaign.

Jeffrey agrees that these types of initiatives can help your cause stand out. She cites one annual event that the Queen’s Park crowd looks forward to: “The egg farmers come every year and cook us breakfast. They’re not coming because they’re angry about something. Do they talk about issues that matter to the agricultural sector? Absolutely. But it is a positive encounter.” In other words, if you want to save your local woodlot, invite the area’s representatives to a fun event – and hold it on a Friday.

Ontario Nature’s Valentine’s greetings were followed by a postcard campaign, addressed to key ministry personnel, that outlined specific habitat protection needs for four species. More than 1,000 people sent cards, and Cowie believes that this public input was integral to promoting better habitat protection for wood turtles, barn owls and peregrine falcons. “Ultimately, the public engagement played a big a role in strengthening the policy and achieving the outcome we were looking for,” she says.

Boots on the ground

Let’s face it: money talks. In addition to giving one-time or recurring donations, you can make financial contributions to the environment in many ways, from asking your employer to make charitable or matching gifts to leaving a bequest to continue your legacy of support after your death.

But equally essential is the time that people devote to these important projects. Hands-on fieldwork, including tasks ranging from species inventories and the eradication of invasive species to native tree plantings and general maintenance, is key to the preservation of protected spaces. This spring, for example, members of the 60-year-old Kingston Field Naturalists association and other area residents will catalogue the species and habitats found within the newly expanded Lost Bay Nature Reserve.

“It’s a volunteer effort that people will be making to learn more about this property,” says Carabetta. “So those who live in the area who weren’t able to contribute financially may be involved as well.” Think of it as the elbow grease that keeps the planet’s biodiversity machine oiled.

Allan Britnell, a Toronto-based freelance writer and editor, is a frequent contributor to the magazine and to the Nature Watch blog on our website.