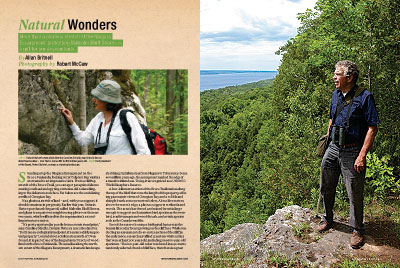 More than a glorious stretch of the Niagara Escarpment, protecting Malcolm Bluff Shores is a gift for our descendents.

Standing atop the Niagara Escarpment on the Bruce Peninsula, looking out at Colpoy’s Bay, visitors are treated to an impressive vista. From a clifftop stretch of the Bruce Trail, you can spot peregrine falcons soaring overhead and spy tiny, centuries-old cedars clinging to the dolostone rock face. Far below are the undulating swells of Georgian Bay.

It’s a glorious stretch of land – and, with your support, it should remain so in perpetuity. Earlier this year, Ontario Nature purchased the parcel, called Malcolm Bluff Shores, and plans to acquire two neighbouring plots over the next two years, which will result in the organization’s second-largest nature reserve.

“It’s pretty spectacular purely from a scenic standpoint,” says Caroline Schultz, Ontario Nature’s executive director. “But from an ecological standpoint, it’s an incredibly important property.” Located about 40 kilometres north of Owen Sound, it is part of one of the largest intact tracts of woodland on the Bruce Peninsula. The area lies along the northern extent of the Niagara Escarpment, a dramatic landscape stretching 725 kilometres from Niagara to Tobermory. Some 400 million years ago, the escarpment marked the edge of a massive inland sea. Today, it is recognized as a UNESCO World Biosphere Reserve.

A four-kilometre section of the Bruce Trail snakes along the top of the bluff that runs the length of the property, offering panoramic views of Georgian Bay and a cobble and shingle beach some 90 metres below. About five metres above the water’s edge, a plateau supports wetlands and woods. The area’s hardwood and mixed forest is large enough to support such sensitive bird species as the ovenbird, scarlet tanager and wood thrush, and at-risk species such as the Canada warbler.

One of the reserve’s unique biological features is the bonsai-like cedar forest growing on the cliff face. While conducting an assessment of a 40-metre section of the cliff in the early 1990s, researchers tallied 15 eastern white cedars that were at least 300 years old, including one 600-year-old specimen. “If a 600-year-old cedar was found in a 40-metre randomly selected chunk of cliff face, then there is a great chance there are living trees approaching 1,000 years in age in the remaining four kilometres,” says University of Guelph research associate Peter Kelly. The property is also home to the American Hart’s-tongue fern, a species of special concern that is found almost exclusively on the escarpment. (A full biological assessment will be conducted at a later date to verify the possible presence of other endangered species.)

Aside from the flora, the area displays a remarkable geological story. From the clifftops down to the beach below, the entire history of the Niagara Escarpment is evident in successive layers of dolostone and shale. “The rock is roughly 350 to 450 million years old,” says Beth Kümmling, executive director of the Bruce Trail Conservancy (BTC) and a trained geologist. “There’s 100 million years of rock exposed on the property.”

Malcolm Bluff Shores is a joint effort between Ontario Nature and BTC, two organizations with a historical tie: before becoming an independent organization, BTC originated as an Ontario Nature (then called Federation of Ontario Naturalists) committee. Today, BTC owns and maintains nearly 1,300 kilometres of hiking trails on 2,800 hectares of land.

The consortium from which Ontario Nature and BTC are buying the land initially purchased it with the intent of building cottages along the shoreline. The province’s Niagara Escarpment Plan (NEP) development restrictions thwarted that proposal but did not stop the would-be developers from logging a significant portion of the property. “We knew that we had to act as quickly as we could, because they would just continue to log,” says Schultz. One of the conditions of sale was that logging cease immediately.

Mark Carabetta, Ontario Nature’s conservation science manager, notes that the logging has already caused considerable damage. “Nothing illegal was done,” he says. “It’s an example of what can happen to a property despite the NEP protection.”

Aside from adding a barrier to restrict access to an onsite logging road and some possible restoration work to a few open areas created for timber operations, Ontario Nature and BTC will allow the terrain to regenerate naturally and are working on a plan for a management strategy. The regeneration from logging is expected to take a couple of decades. “When you’re doing conservation work, you have to take the long view,” says Carabetta. “And this property will rebound. It’s spectacular now, and it’ll be even more spectacular once the forest regenerates.”

The purchasing plan is occurring in phases. The lands that comprise the property consist of three parcels. Last March, Ontario Nature completed the $504,000 purchase of the largest of the three, a 233-hectare section at the northeast end of the property. The sale of the two remaining parcels will be finalized in 2011 and 2012 and ultimately more than 400 hectares of prime Niagara Escarpment habitat will be preserved.

At its final size of 1,045 acres (423 hectares), Malcolm Bluff Shores will be only slightly smaller than Ontario Nature’s largest nature reserve, the 471-hectare Altberg Wildlife Sanctuary in the Kawarthas. And there is always the possibility for Malcolm Bluff Shores to expand. As Carabetta points out, the Altberg Sanctuary started out as an 83-hectare bequest and reached its current size after four successive expansions.

He adds that a network of protected lands already exists near Malcolm Bluff Shores, including an Ontario Heritage Trust property and a large tract of undeveloped forest that the Chippewas of Nawash First Nation holds at neighbouring Cape Croker. The region is also linked to Ontario Nature’s early history: the organization purchased its first reserve at nearby Dorcas Bay in 1962. That property is now part of Bruce Peninsula National Park.

Once Malcolm Bluff Shores is added to the fold, Ontario Nature will own 22 nature reserves and two conservation easements, for a combined total of about 6,000 acres (2,428 hectares) of protected landscapes. While some properties are fairly remote – Lyle Island on Lake Huron is accessible only by boat, for example – all are open to the public and many of them have clearly marked parking areas, signage and well-maintained trails. “A phrase I often use is, ‘Connecting people with nature,’” says Carabetta. “It’s not just about protecting the natural features that are there, but finding ways to get people out to appreciate them without having a negative impact on them.”

A bequest from the estate of Jean Frances Schneider, the Nature Canada Sietske Germeraad Memorial Fund, and some public funding from the Ontario Ministry of Natural Resources Greenlands Program paid for the purchase of the first parcel. Ontario Nature is now calling on supporters to help raise the remaining $1.5 million to complete the envisioned reserve. For more information or to get involved, visit our website, www.ontarionature.org/protectmalcolmbluffshores, or contact Ontario Nature’s director of development, Kimberley Mackenzie, at 416-444-8419, ext. 236 or kimberleym@ontarionature.org.

Allan Britnell, a Toronto-based freelance writer and editor, is a frequent contributor to the magazine and to the Nature Watch blog on our website.