Bring back the wolf 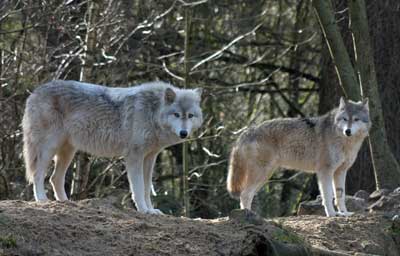 The lush green that carpets the Scottish Highlands has been looking a little threadbare in recent years, and an unchecked population of red deer (kissing cousins to North American elk) is to blame. Yet the solution being proposed by biologists is a controversial one: reintroducing wolves to a landscape that they’ve been extirpated from for centuries.

Wild wolves haven’t been seen in Scotland in over 200 years. Since then, red deer numbers have boomed, with serious consequences for the Scots pine, birch and other greens that they graze on. Based on promising results from other wolf reintroductions – most notably in Idaho’s Yellowstone National Park – American and Australian researchers are proposing a test case in Scotland.

Reintroduction programs are controversial at the best of times, but when the species in question is a predator as maligned throughout human history as the big bad wolf, the rhetoric – particularly from ranchers with grazing stock near the proposed reintroduction site – can hit epic levels. That’s why the proposed “large-scale controlled experiment” in Scotland would be in as carefully contained an environment as possible: on an island, or securely fenced-off region.

Reintroducing predators not only helps manage populations of other species lower down the food chain, it has a cascading effect on the entire ecosystem. In Yellowstone, for example, smaller elk herds have meant species like willow, aspen and cottonwood are allowed to mature, improving biodiversity and helping prevent erosion, which in turn improves the habitat for the likes of beaver and fish.

“There’s an increasing awareness that the loss of large predators is a global issue. The effects ultimately extend to forests, grasslands, streams, fisheries and wildlife,” says Oregon State University professor William Ripple, a co-author of the report, set to be published in Biological Conservation. With such a broad-ranging potential benefit, Ripple and his colleagues feel it will be well worth it to weather the “considerable media attention” and hostility they anticipate their proposal will incite.

Ultimately, the hope is that with the deer under control, areas of the Highlands that are now largely covered in homogenous pine forests or barren moors, may revert to diverse landscapes dotted with birch, willow, elder and oak, and a host of wildlife those mixed forests would support: something not seen since the British and French were battling for territory an ocean away in what would become Canada.