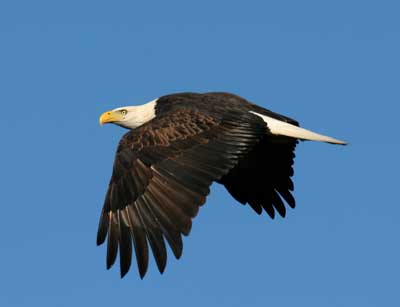 After more than 35 years of endangered species status, bald eagles living south of the French and Mattawa rivers were downgraded to a species of special concern by the Ontario Ministry of Natural Resources in mid-August. Jody Allair, a biologist with Bird Studies Canada (BSC) who oversees field studies of a southern Ontario-wide bald eagle research program, says the downgrading was a key milestone in one of the greatest wildlife recoveries in Ontario history. Figures from 2008 indicate that southern Ontario is home to at least 45 breeding pairs of bald eagles—the most since the 1950s. But Allair isn’t going to let down his guard. “Things are getting better, but we’re not quite there yet,” he says. “We don’t want a repeat of what happened in the 1960s when the population disappeared before everyone’s eyes.”

There was a time when the bald eagle was a common bird in southern Ontario, especially along the north shore of Lake Erie, where surveys taken over a century ago reported an average of one nest per mile of shoreline. Another historical sample suggested at least 200 nesting pairs of eagles lived south of the Ottawa River. Then widespread agricultural development in the late 1800s nearly wiped bald eagles out of the lower Great Lakes region entirely, thus beginning a period of peaks and valleys in eagle populations that continued throughout the 20th century:  Legislation to protect bald eagles allowed the population to rebound to about 100 breeding pairs by 1950; but widespread use of the pesticide DDT then caused numbers to plummet. The “watershed point,” says Allair, was 1980, when there were only three known nesting pairs of bald eagles in southern Ontario—none of which were able to successfully reproduce due elevated levels of absorbed toxins. Meanwhile, the northern Ontario population of bald eagles has remained relatively strong, although it is also designated a species of Special Concern under provincial legislation.

The ongoing southern Ontario bald eagle recovery program began in 1983, when the Canadian Wildlife Service transplanted 32 eaglets from northwestern Ontario to the shores of Lake Erie. BSC (www.bsc-eoc.org/research/speciesatrisk/baea/index.jsp?lang=EN&targetpg=index) got involved in 1996, and Allair’s work involves organizing a network of volunteer nest monitors, banding young birds and taking blood samples to analyze eagles’ absorption of environmental toxins like mercury and lead. In 2004, Allair began coordinating a satellite-tracking program that allows researchers to correlate blood sample data with eagles’ movements across eastern North America to determine where they may be encountering contaminants.

Allair’s research has revealed a simple truth: “As long as they have food and the water’s clean, we’ll have bald eagles [in southern Ontario],” he says. “They’re a great indicator of the health of aquatic ecosystems. Hopefully humans have finally learned their lesson.”