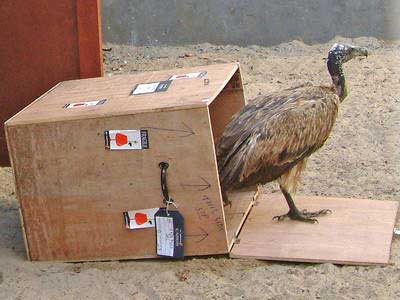 While the birth announcement for a slender-billed vulture (Gyps tenuirostris) is unlikely to elicit the fawning “oohs” and “aahs” you’d typically expect for a baby animal, the news was greeted with a huge sigh of relief in south Asia.

The critically endangered species’ population has plunged more than 95 percent in the past 15 years, and there are now estimated to be less than 1,000 left in the wild. The main cause for the crash is a drug called diclofenac, an anti-inflammatory that has been heavily prescribed as a low-cost pain-reliever for the region’s livestock. (Injured or ill oxen, for example, can be injected then put back to work, often to the death.) The vultures ingest the drug when they eat the carcasses of animals treated within a few days of their demise. In the birds, diclofenac causes lethal kidney failure.

Unfortunately for recovery efforts, vultures are a notoriously difficult species to rear in captivity. So the announcement that the Bombay Natural History Society’s Vulture Conservation Programme had successfully bred hatchlings at two conservation centres was a global first. “The hatching of slender-billed nestlings has given us hope that we can save this species from extinction,” says BNHS president B.G. Deshmukh. The centre hopes to breed more slender-bills, along with two other species – long-billed and white-backed vultures – both of which are also endangered.

One of the more fascinating aspects of this project is why researchers in India were so interested in saving this unsightly creature. For millennia, vultures have been a key component of Parsi funerary practices. Parsis are an Indian-based offshoot of Zoroastrianism, a monotheistic faith that predates Judaism, Christianity and Islam.

In terms of environmental awareness, this ancient religion is way ahead of its time. Rather then cremating remains (which would pollute the sky) or burying bodies (which pollutes the ground), Parsis have traditionally placed their deceased in open-topped, six-metre-high Towers of Silence for vultures to come and pick the bones clean. Gruesome, perhaps, but very practical. At least until the vultures started to disappear.

Vultures are also relied upon to dispose of the carcasses of wild and domesticated animals, and those dumped outside tanneries and other industries. In their absence, populations of rabies-carrying feral dogs and rats have boomed.