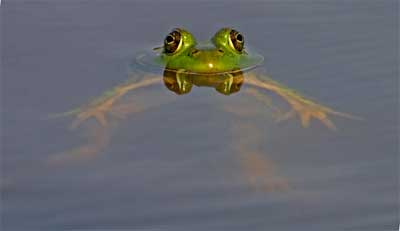 Earlier this summer you may have read headlines like this one from the BBC proclaiming, “Legless Frogs Mystery Solved.” Good news, you likely thought, someone’s pinpointed the cause of one of the more disturbing ecological oddities of recent decades.

Unfortunately, it’s not quite so straightforward. The source for the seemingly clear-cut headline is a paper published by two researchers, Stanley Sessions, a biology professor at Hartwick College in Oneonta, New York and researcher Brandon Ballengee of the University of Plymouth in England. In a series of lab tests, the two placed tadpoles in tanks with a number of different predators. They then observed three species of dragonfly nymph munching on the soon-to-be-frogs nascent legs. “What we’ve found is that these predators grab tadpoles and almost surgically remove their tender hind limbs with their mandibles,” says Sessions.

Interesting observation, no doubt, but it seems early to hop to the conclusion that this lab study closes the book on the cause of missing limbs, and it flies in the face of countless studies showing otherwise. While predators have long been considered a possible source for amphibian malformations – including missing limbs – a number of other factors are also suspected culprits, including elevated UV levels tampering with DNA, parasitic flatworms and a variety of chemical contaminants including pesticides, herbicides and heavy metals.

Meanwhile, U.S. Fish and Wildlife researchers are doing fieldwork in Alaska to see if inorganic contaminants – copper in particular – might be impacting amphibians’ ability to detect predators, making them more susceptible to the type of surgical predation Sessions describes.

Part of the problem is that isolating individual contaminants from murky wetlands waters is extremely costly and difficult to do, making a straightforward observation like predation more likely to be uncovered.

And while chemicals do undergo fairly rigorous testing prior to approval for widespread use, there’s still a limited understanding of how they’ll interact with each other and the environment. When things go wrong, it’s only long after negative side effects are first noticed – most famously in the case of DDT – that chemicals are withdrawn.

Given the stakes involved – the very survival of species along the entire length of the food chain – continuing to take an innocent until proven guilty approach may not be the best course of action.