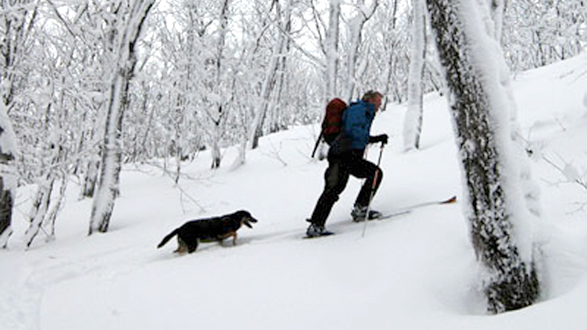 A unique land use partnership north of Sault Ste. Marie has resulted in the long-term protection of one of Ontario’s highest points of land. With its twin peaks rising some 360 metres above the surrounding terrain, King Mountain is the focal point of the Algoma Highlands, a swath of rolling terrain stretching for 120 kilometres between Sault Ste. Marie and Lake Superior Provincial Park along the eastern shore of Lake Superior. The Algoma Highlands Conservancy (AHC) has successfully completed a two-year fundraising campaign (see https://onnaturemagazine.com/saving-king-mountain.html) to purchase the 1,050-hectare King Mountain property. AHC president Doug Pitt says the conservancy will manage it in accordance to its core mandates of conservation, non-motorized outdoor recreation, environmental education and environmental research.

Much of the area north of Sault Ste. Marie is open to logging and mining development. In this sense, Pitt, a research scientist with the Canadian Forest Service, says the King Mountain property is an ecological “oasis.” Loggers have historically avoided King Mountain’s steep slopes, allowing a mature forest of sugar maple, yellow birch and red oak to grow largely undisturbed. Provincially rare plants like Braun’s holly fern (Polystichum braunii), oval-leaved bilberry (Vaccinium ovalifolium) and northern wild licorice (Galium kamtschaticum) are found in the area, and harsh, windswept peaks of King Mountain are home to some of North America’s most southerly populations of arctic plants—remnants of the last ice age.

Pitt says the AHC’s success is in part due to local landowner Astina Forest AG’s commitment to sustainable logging and willingness to cooperate with the conservancy’s objectives. In 2007, Astina AG, the AHC and Stokely Creek Lodge, local cross-country ski facility with 130 kilometres of trails in the area, signed a partnership to outlaw motorized vehicles and promote recreational “silent sports” on 3,200 hectares of land. Also part of the deal was an exclusive two-year option for the AHC to purchase the King Mountain land. “The partnership created a large, contiguous landbase of forested lands and serves as a model for multi-stakeholder management,” says Pitt. “A partnership of this nature is truly unique in the Algoma region and, indeed, a rarity in Canada.”

Through private donations and the generous support of Stokely Creek Lodge owner Gaylen Byker, the AHC raised $1.5 million to complete the King Mountain transaction in September and will take ownership of the property in December. Pitt says King Mountain will become the centerpiece of the conservancy’s landholdings, which also include critical peregrine falcon nesting habitat at nearby Robertson Cliffs. All told, the AHC protects 1,200 hectares of “sensitive ecosystems and key ecological values in the Algoma region,” says Pitt. “With the exception of trail development and maintenance activities, the AHC plans to leave these lands in a relatively untouched, natural state for all to enjoy through soft-touch, non-motorized access.”