Mining, Yes. Ecotourism, Not So Much 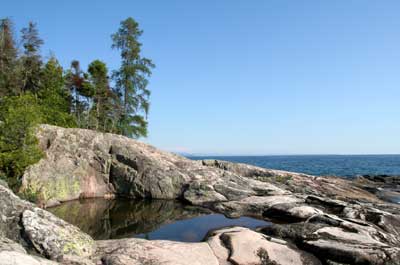 The coalition group Citizens Concerned for Michipicoten Bay (CCMB) has lost a seven-year fight against a proposed traprock quarry on the eastern shore of eastern Superior. Its last-gasp attempt to stop the development was an appeal to the Ontario Municipal Board (OMB) to overturn an amendment to the municipality of Wawa’s official plan that will allow Superior Aggregates Co. to open the quarry on 35 hectares of rezoned shoreline property. A decision was rendered July 15 in favor of the rezoning by board member J. E. (Joe) Sniezek, a former director of long-range planning for the city of Sault Ste. Marie.

The coalition feared the quarry, which will include a rock crushing operation and feature periodic dynamiting, would negatively impact seasonal and year-round residences and the area’s natural resources, and discourage development of ecotourism. The quarry site is located less than five kilometres from Michipicoten Provincial Park and 6.5 kilometres from a provincial conservation reserve. CCMB had been joined in the OMB appeal by David Wells of ecotour operator Naturally Superior Adventures, who had plans to expand his Rock Island Lodge at the mouth of Michipicoten River.

Anthony Usher, the planning consultant for CCMB, had argued that “the recreational use surface of the lake was an amenity area or outdoor space and the odour, noise and other contaminants would create an adverse impact. These impacts would include lighting and blasting impacts.” But the decision rejected this argument, stating: “The Board finds no policy basis for the protection of recreationally used waters [from noise and lighting impact].”

This may be prove to an interesting precedent where other water in the province could be negatively affected by proposed land-based industrial and commercial activities.

“[Lake Superior] and its rugged coastline are a treasure and the number and extent of the provincial and national parks and nature reserves is a testament to how important the lake is to the citizens of Ontario and Canada,” Sniezek wrote. “These facts do not in effect give the Board or anyone else the right to say to a private land owner, ‘you live on a beautiful lake so give up your right to development so that we may maintain what we consider a pristine wilderness.’ ”

Wells told the Sault Star that Naturally Superior Adventures “cannot go ahead with the plans of making [Rock Island Lodge] an eco-tourism business that included a green lodge and mini-conference facility.”

The full 72-page decision (PL040025) can be downloaded in pdf format from the OMB decisions page.