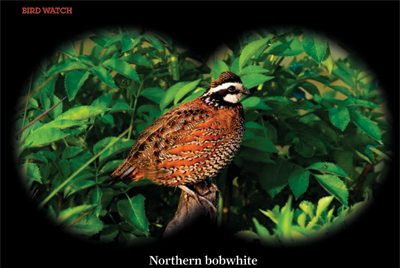 The grasslands and savannahs of Walpole Island support what may be the last, viable, native population of this pint-sized wildfowl.

Indigenous to Ontario’s nearly disappeared tallgrass prairie and savannah, the northern bobwhite highlights the plight of many imperilled grassland birds. The pint-sized wildfowl, which in Canada is found only in southwestern Ontario, once took to and thrived on farmland but has all but vanished with the changes to agriculture in recent decades. Today, the species just barely holds on at the extreme southwestern edge of the province and is in steep decline across its range in the eastern and central
United States.Unlike many species at risk, the bobwhite has been well studied because it is a popular game bird in the United States, especially in the south. The plump, chicken-like native quail stands about the height of a robin but weighs two or three times as much. The bobwhite forages, roosts and nests on the ground, and is beset by a long list of predatory raptors and mammals, though it’s capable of short, low bursts of flight. About 80 percent of bobwhites live less than a year. However, the species has a high reproductive rate, laying clutches of up to 16 white eggs, starting in May. From late summer to early spring, these birds form flocks, called coveys, usually of three to 20 individuals.

Bobwhites once inhabited the approximately 1,000 square kilometres of prairie that flourished in southwestern Ontario. Their habitat requirements are very specific. These birds require open, grassy fields or croplands for feeding, and make their nest in shallow ground depressions concealed by tall vegetation and arching canopies of grass and plant stems. Though pioneer farmland largely replaced native prairie and savannah, it proved a good substitute for them. The birds’ range expanded north to southern Muskoka and the Kingston area, and peaked in the mid-1800s.

“Bobwhites did pretty well on small, diverse farms for many years. The hay was cut later and it was not all just corn and soybeans,” says Patrick Hubert, a senior avian biologist with the province’s Ministry of Natural Resources (MNR). “They were able to use fallow fields, pasture and haygrounds, and hedgerows in the winter.” Fallow fields were ideal, notes Hubert, because fruitful annual weeds provided abundant seeds and excellent nesting and brooding habitat.

Over the past 40 years, however, the bobwhite, like many grassland birds, has been hit hard by the shift toward larger, less varied fields of crops, less pasture and the near disappearance of fallow lands and hedgerows. Farmers in the province now leave well under 1 percent of their fields to rest and rejuvenate naturally, instead usually applying nitrogen fertilizer or planting nitrogen-fixing soybeans.

Land devoted to pasture in Ontario fell by 65 percent between 1921 and 1986, and again by more than 40 percent over the following two decades. Herbicides and pesticides, meanwhile, reduced bobwhite food sources and poisoned the birds.

While bobwhite coveys require winter home ranges of five to 20 hectares, suitable habitat has become highly fragmented, exposing these birds to predators such as foxes, coyotes, raccoons, skunks and cats. As well, bobwhites’ diminished haunts often lack enough dense shrub thickets for winter cover. In many areas, the birds have been unable to recover from heavy losses caused by long periods of deep snow and cold or ice storms. Since the birds tend to move less than a kilometre in their lifetimes, many local extirpations have resulted.

Ontario had an estimated population of a little more than a thousand bobwhite coveys in the early 1970s – mainly in Lambton, Elgin and Middlesex counties – before their numbers were severely knocked back by three consecutive hard winters later that decade. Based on surveys in 1989 and 1990, MNR calculated that the population had fallen to only about 185 native birds in 16 coveys. Hunting, which usually involved released, pen-raised birds, largely stopped in southwestern Ontario by the early 1990s, and the species was designated as endangered nationally by the Committee on the Status of Endangered Wildlife in Canada in 1994. In 2007, Ontario’s Endangered Species Act ended hunting even of pen-raised birds, except on private game bird preserves away from remnant native populations.

Breeding Bird Survey records in the United States from 1965 to 1995 show the bobwhite has declined by 70 to 90 percent in four-fifths of the states in which it occurs and has disappeared completely from many areas. Habitat loss is thought to be the main cause. The grassland and savannah of Walpole Island, on the north shore of Lake St. Clair, are thought to have the only viable native bobwhite population left in Ontario, though some coveys may remain in nearby mainland areas. About 8 percent of the island’s 24,000 hectares is still considered prime bobwhite habitat. However, the last partial survey for the quail in Ontario, in 2006, found just a few calling on Walpole Island. Despite their camouflage colouring, the birds are fairly easy to count in spring when males, which sport striking white chins and eyebrows, whistle their distinctive namesake “bob-WHITE” calls to attract mates. According to the latest Atlas of the Breeding Birds of Ontario, a few bobwhite sightings have been reported as far east as the Niagara Peninsula and north to southern Grey County. But authorities think that quails turning up beyond the far southwest are probably escaped or released pen-raised birds. Such birds often come from southern stock that’s less suited to a northern climate and usually die out within a year. Worse, they may weaken the original population by interbreeding and passing on their less-hardy genes.

Kyle Breault, however, isn’t so sure that all bobwhites beyond the Walpole Island area are non-native birds and is frustrated that MNR is not surveying and doing genetic testing to find out. The program coordinator for Tallgrass Ontario, an umbrella organization supporting groups doing prairie restoration, Breault says that upland game bird hunting was never popular in Ontario, and very few captive bobwhites have been released in the past 30 years. “We don’t have enough information,” he asserts. “There hasn’t been any work done by MNR.”

In recent years, according to Breault, about 30 organizations – county stewardship councils, conservation authorities, municipalities and naturalist groups – have been creating or restoring an average of about 243 hectares of prairie and savannah annually on private and public land. He hopes these scattered projects can be coordinated to establish areas large enough to support bobwhite populations, which require about 1,000 hectares of fairly contiguous habitat to thrive. Even so, recovery would be very slow without the reintroduction of wild birds from other areas, something Breault and other prairie enthusiasts would like to see. While such reintroductions have taken place in parts of the United States in the past decade, says Breault, he believes that MNR is deeply divided over the issue. “I don’t know why. It worked with turkeys,” which, he notes, were reintroduced in Ontario in the 1980s.

“There is a lot of difference of opinion on what should be done,” agrees Ken Tuininga, senior species-at-risk biologist with the Canadian Wildlife Service, which is taking the lead in drafting a bobwhite recovery strategy, in cooperation with MNR, Walpole Island First Nation and others. Much work on the strategy and the issue of reintroduction still needs to be done, he says. “There are so many unanswered questions right now. What are the most significant threats? How much habitat is there left that is appropriate? What is our population and how many are native?”

Until researchers have those answers, the bobwhite remains in danger of following the greater prairie chicken into extirpation from Ontario. “My concern is whether we can restore enough habitat in time to re-establish a viable population,” says Hubert. “The future is uncertain at this point.”

Tim Tiner is the author of several nature guidebooks and a long-time contributor to ON Nature.