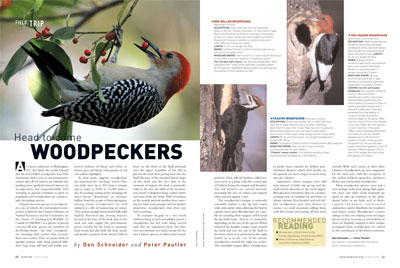 by Dan Schneider and Peter Pautler

A t a press conference in Washington D.C. last April, the world learned that the ivory-billed woodpecker lives.This charismatic bird is not, to our amazement, extinct after all. It’s hard to say whether the startling news sparked renewed interest in woodpeckers, but unquestionably bird watching in general continues to grow in popularity, and woodpeckers are a particularly fascinating species.

Ontario has nine species of woodpeckers, one of which, the red-headed woodpecker, is listed by the Ontario Ministry of

Natural Resources and the Committee on the Status of Endangered Wildlife in Canada (COSEWIC) as a species of special concern. All nine species are members of the Picidae family – the “true”woodpeckers, meaning hole nesters that excavate their own cavities.They are jaunty birds of upright posture, with sharp pointed bills, short legs, long stiff tails and boldly patterned feathers of black and white or brown, grey and black, with patches of red and yellow highlights.

As their name suggests, woodpeckers are renowned for “pecking” wood. They can strike trees up to 300 times a minute and as many as 8,000 to 12,000 times a day. Excavating nesting holes, foraging for insect larvae, “drumming” on resonant, hollow branches as part of their springtime mating ritual, woodpeckers are well adapted to a life of hammering on wood.

They possess straight broad-based bills with slightly flattened tips. Strong muscles located at the base of the beak and on the neck not only supply the jack-hammer power needed for the beak to penetrate hard wood, but also hold the beak steady and absorb a portion of the shock. Folds of bone on the front of the skull protrude over the upper mandible of the bill to prevent the beak from jarring back into the  skull. Because of the rounded, broad shape of the skull and the fact that at the moment of impact, the beak is perpendicular to the tree, the bulk of the deceleration shock is dissipated along a plane below and away from the brain.Tufts of feathers in the nostrils prevent sawdust from entering the bird’s nasal passages and, for further protection, woodpeckers close their eyes when pecking.

To maintain its grip on a tree trunk while pecking at such remarkable speed, a woodpecker has feet with sharp, curved nails that are zygodactyl (their feet have two toes forward, two back, except for the two Ontario species of three-toed woodpeckers). Their stiff tail feathers, called retrices, serve as a prop, with the central pair of feathers being the longest and broadest. The tail feathers are curved forward, increasing the area of contact and support when pressed against a tree.

The woodpecker’s tongue is extremely extensible, barbed at the tip and coated with extra-sticky saliva, allowing the bird to capture insect prey. Woodpeckers are capable of extending their tongues well beyond the tip of the beak – four to 13 centimetres depending on the size of the species. When retracted, the lengthy tongue wraps around the back and over the top of the skull to the front where it is anchored in the right nostril or, as in the case of the downy woodpecker, around the right eye socket. The extensible tongue allows woodpeckers to probe insect tunnels for hidden prey. Northern flickers, which feed mostly on the ground, use their tongue to reach deep into ant colonies.

Sapsuckers, whose tongues have stiff hairs instead of barbs, lap up sap and the small insects attracted to the sweet liquid.

Woodpeckers sometimes dine on carcasses, pecking away at cartilage, fat and bone to obtain calcium. Red-headed and red-bellied woodpeckers have been known to pounce on small mammals, killing them with their beaks and tearing off bite-sized morsels.With such variety in their diets, Ontario’s woodpeckers are non-migratory for the most part, with the exception of the yellow-bellied sapsucker, northern flicker and red-headed woodpecker.

Most woodpecker species carve out a new nesting cavity each spring. Bats, squirrels, mice and other small mammals are quick to take up residence in the abandoned holes, as are birds such as blackcapped chickadees, red-breasted nuthatches, eastern bluebirds, tree swallows and house wrens. Woodpecker cavities enlarge as they rot, making room for larger species such as raccoons or wood ducks to move in. Superbly adapted to their unique ecological niche, woodpeckers are critical to the enrichment of the forest ecosystem.