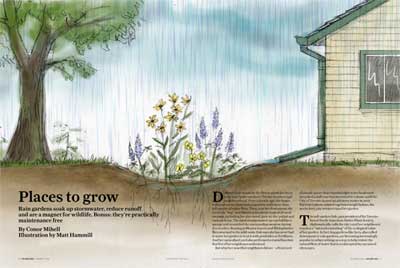 CONSTRUCTION SITE
Building a rain garden in your yard is a relatively straightforward process you can complete in a weekend.

Location, location. Observe how water drains on your property. A natural depression at the base of a slope is ideal. Keep rain gardens at least four metres from your house to prevent water from seeping into the foundation. You don’t need permission from the public works department to disconnect eavestroughs from municipal storm sewers. Toronto gardener Janet Harrison extended a downspout with aluminum piping, running it behind a cedar hedge to feed into her garden. “Extensions aren’t pretty, but you can usually find a way to hide them behind vegetation,” says Harrison, who leads seminars on rain-garden construction for the North American Native Plant Society.

Next, consider the size of your bog. The larger your roof and property, the larger the rain garden needed to capture the runoff from your lot, but Harrison advises that you “do what works for your yard.” Even a small downspout garden makes a difference.

Now it’s time to dig in. Make sure you contact relevant public works departments before you start to dig. Spring is a good time for this work, as the ground will be easier to dig. After cutting out the sod, use a spade to remove soil up to one metre deep. “This is where your rain garden may change shape,” says Harrison. “I decided on a horseshoe shape for mine to avoid large tree roots.” Line the pit with a plastic sheet to ensure the soil stays moist during dry periods. Harrison suggests not perforating the liner, but you may wish to poke a few holes in it if your soil is slow draining (as clay typically is). Refill the pit, starting with the soil you removed last – the deep mineral soil – then the surface soil. Enrich the uppermost layer with compost. Let the soil settle for a few weeks before planting.

Deborah Dale would be the first to admit her front yard was “quite out there” for her Scarborough neighbourhood. Over a decade ago, she began to transform her lawn into a meadow with more than 200 species of native flora. Then, near her downspout, she created a “bog” and filled it with plants typical of rural swamps, including Joe-pye-weed, Jack-in-the-pulpit and various ferns. The mini swamp soaked up rainfall like a sponge and nourished the surrounding meadow during dry weather. Buzzing pollinator insects and flitting butterflies swarmed to the wild oasis. Dale says she has never had to water her garden or treat it with pesticides or fertilizers. And her naturalized yard also performed a crucial function that few of her neighbours understood.

But what her unsettled neighbours did see – a front yard of unruly nature that extended right to her boulevard – provoked a dull roar that increased in volume until the City of Toronto issued an advisory notice in 2007 that Dale’s plants violated vegetation height bylaws. Six weeks later, city workers razed her garden.

The soft-spoken Dale, past president of the Torontobased North American Native Plant Society, diplomatically calls the city’s and her neighbours’ reaction a “misunderstanding” of the ecological value of her garden. In fact, bog gardens like hers, also called downspout or rain gardens, are becoming increasingly popular in urban settings as a way to help restore the natural flow of water that is so disrupted by our paved cityscapes.

According to an Ontario Ministry of the Environment study, in a typical unaltered forested area, upwards of 40 percent of precipitation returns to the atmosphere through evaporation from the ground and plant surfaces, and 50 percent filters into the earth to replenish groundwater aquifers. The remaining surface water flows into waterways. But stripping cityscapes of vegetation and paving surfaces dramatically alter this natural cycle of water flow. Often, eavestroughs deliver roof water directly into storm sewers. Studies have estimated that in urban areas, overland runoff increases four-fold and the groundwater recharge is almost halved. “Our built environments are less effective at returning water to the ground,” notes Brian Branfireun, an associate professor of geography at the University of Toronto. According to the Ontario Ground Water Association, three million Ontarians rely on groundwater for drinking, agriculture and industrial water supplies, so diminished groundwater recharge is a concern.

But runoff from rooftops, city streets, parking lots and lawns causes even more problems. Unable to percolate into the earth, it swirls into storm drains and sewers that flush into streams, rivers and lakes. A cocktail of contaminants is collected along the way – oil, gasoline and radiator fluid from leaky automobiles, fertilizers from lawns, human waste from sewer tiles and heavy metals from industrial zones. This flush of noxious stew after a rainfall poisons aquatic species, causes algae blooms, renders beaches unsafe for swimming and bioaccumulates in the food chain.

That runoff is also significantly warmer than typical rainwater, compounding the problems. Larry Lamb, an ecologist who teaches natural landscaping at the University of Waterloo, explains that, as water warms, its ability to hold life-sustaining oxygen decreases – much to the detriment of aquatic organisms. “Water that comes from black asphalt and shingled rooftops is unnaturally warm,” he says. “The first sudden flush of this hot, deoxygenated and contaminated water causes a thermal shock in nearby streams.”

Rain gardens, however, work to capture rainwater before it becomes stormwater. Creating a rain garden is a relatively easy weekend project that has enormous environmental benefits. “The whole idea is to deal with the issues of water quantity and quality as soon as possible,” says Larry Harder, an associate professor of landscape architecture at the University of Guelph. “Property owners are the first line of defence in eliminating a lot of problems that occur as surface water runs through the urban environment.”