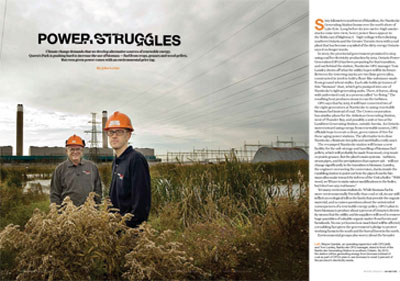 Climate change demands that we develop alternative sources of renewable energy. Queen’s Park is pushing hard to increase the use of biomass — fuel from crops, grasses and wood pellets. But even green power comes with an environmental price tag.

Sixty kilometres southwest of Hamilton, the Nanticoke Generating Station looms over the north shore of Lake Erie. Long before its 200-metre-high smokestacks come into view, heavy power lines appear in the fields east of Highway 6 – high-voltage tethers linking southern Ontario and the Greater Toronto Area with a coal plant that has become a symbol of the dirty energy Ontario says it no longer wants.

In 2007, the provincial government promised to stop using coal for electricity production by 2014. Ontario Power Generation (OPG) has been preparing for that transition, and out behind the station, Nanticoke OPG manager Tom Lumley shows off what the utility hopes will be its future. Between the towering stacks are two lime green silos, constructed in 2008 to hold a flour-like substance made from ground wheat stalks. Each silo holds 50 tonnes of this “biomass” dust, which gets pumped into one of Nanticoke’s eight generating units. There, it burns, along with pulverized coal, in a process called “co-firing.” The resulting heat produces steam to run the turbines.

OPG says that by 2013, it will have converted two of the eight generators at Nanticoke to using renewable biomass fuel instead of coal. The Crown corporation has similar plans for the Atikokan Generating Station, west of Thunder Bay, and possibly a unit or two at the Lambton Generating Station, outside Sarnia. As Ontario moves toward using energy from renewable sources, OPG officials hope to create a clean, green raison-d’être for these aging power stations. The alternative is to close Nanticoke, eliminate 600 jobs and mothball a costly asset.

The revamped Nanticoke station will house a new facility for the safe storage and handling of biomass fuel pellets, which will probably be made from wood, crop waste or prairie grasses. But the plant’s main systems – turbines, steam pipes, and the precipitators that capture ash – will not change significantly in the transition to biomass. Lumley, the engineer overseeing the conversion, ducks inside the rumbling station to point out how the pipes from the biomass silos snake toward the inferno of the Unit 4 boiler. “With wood, we’ll have to make minor modifications to the boiler, but I don’t see any real issues.”

Yet many environmentalists do. While biomass fuel is more environmentally friendly than coal or oil, its use still inflicts an ecological toll on the lands that provide the organic material, and so raises questions about the unintended consequences of a renewable energy policy. OPG’s plan to burn biomass to produce about 2 percent of Ontario’s electricity means that the utility and its suppliers will need to remove huge quantities of valuable organic matter from forests and farmlands. No one yet knows how much land will be affected, a troubling fact given the government’s pledge to protect working farms in the south and the boreal forest in the north.

Environmental groups also worry about the broader consequences of OPG’s move, which is playing out against the backdrop of the international climate change conference in Copenhagen in December 2009. In all likelihood, the utility will be only one prospective customer for the province’s nascent biomass industry. Queen’s Park is pushing the biomass plan as a means of refuelling the hobbled timber sector, which would be called on to supply hundreds of thousands of tonnes of wood pellets to OPG, and, potentially, to utility customers in Europe and the United States. Ontario Nature, and others, are warning that neither Queen’s Park nor OPG have ruled out the use of peat – a rich wetland substrate that many consider to be a fossil fuel – as a potential source of biomass. “The forest industry is in big trouble, so it’s little wonder that people are ready to grab on to alternatives as quickly as possible,” says Ontario Nature’s senior director of conservation and education Anne Bell. “But we don’t fully understand the potential consequences, and that’s dangerous.”

On paper, the case for biomass looks promising. When organic material – such as straw, branches or wood chips – is transformed into fuel and burned to run turbines or engines, the combustion process releases greenhouse gases (GHGs). But because the fuel came from harvested organic matter that will eventually regenerate by absorbing carbon dioxide, the net result is carbon neutral due to the cyclical nature of the process. With fossil fuels, by contrast, the carbon has been trapped for millions of years below the ground, and its release increases the overall GHG concentration in the atmosphere.

While replanting, harvesting and processing are all activities that consume energy and generate additional GHG emissions, those emissions appear to be dramatically lower than amounts that traditional fuel sources produce. According to a “life cycle assessment” that Heather MacLean, a University of Toronto professor of engineering, conducted for OPG, the total GHG emissions associated with biomass fuel pellets are just 9 percent of those produced by mining and burning similar quantities of coal.

But the biomass story is complicated. For example, when burned, some crop biomass leaves behind residues that damage the boilers. Wood pellets throw off highly flammable dust, as Atikokan workers discovered in December 2008 when a load of wood pellets ignited, damaging the plant (similar events occur in flour mills). While no one was injured, OPG engineers learned that static and dust must be minimized in biomass storage facilities. As Chris Young, the OPG vice-president overseeing the biomass project, acknowledges, “a lot of people in the biomass industry worldwide have experienced explosions.”

Cost is also a problem. Wood pellets are more expensive to produce than coal yet, in general, contain only half as much energy, because carbon is far less concentrated in wood pellets than in coal. OPG will need the Province to guarantee higher rates to support OPG’s shift to biomass, as is the case for solar and wind energy producers.

The other challenge is the current lack of a pellet industry in Ontario. Even so, when OPG put the word out last winter that it was seeking pellet producers, more than 80 firms responded, over half of which are in Ontario’s timber industry. In 2010, the utility will begin asking companies to bid on supply contracts.

Queen’s Park is pleased with the industry’s response. “One of the real goals is to support a new bio-economy,” says Minister of Northern Development, Mines and Forestry Michael Gravelle, who represents the riding of Thunder Bay-Superior North. “There’s certainly some export capability.”