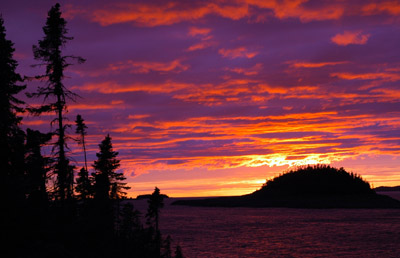 The Nature Conservancy of Canada (NCC) has brokered the largest conservation deal in Ontario history by raising $7.4 million to purchase a 1,900-hectare, eight-island archipelago in northwestern Lake Superior. NCC partnered with The Nature Conservation of the United States and the Ontario and federal governments to acquire Wilson Island, which is surrounded by the protected waters and lakebed of the Lake Superior National Marine Conservation Area (NMCA). NCC regional vice-president of Ontario Chris Maher said the Wilson Island acquisition will ensure the long-term protection of an ecologically significant group of islands. “This project has been on the conservation community’s wish-list for many years,’’ said Maher.

Wilson Island is one of the largest islands within the Lake Superior NMCA and is located 200 kilometres east of Thunder Bay, near the small community of Rossport. Undeveloped in its entirety, Wilson Island’s cliffs provide habitat for peregrine falcons and bald eagles, and its shoreline supports unique coastal wetland habitat and rare communities of herbaceous plants that are typically found in the arctic and at alpine elevations; it ranked second in a Parks Canada survey of areas best representative of the region. “It’s an amazing landscape,” said Maher. “The area is one of the most biologically diverse in Ontario.” But until the NCC deal was finalized in late September, Wilson Island was privately owned and available for cottage developers, mining exploration or logging operations.

Given its location in the heart of the NMCA and its ecological significance, Wilson Island was an ideal candidate for the federal government’s Natural Areas Conservation Program and Ontario’s Greenlands initiative—both of which contributed to NCC’s fundraising efforts. Because a U.S. citizen originally owned the archipelago, The Nature Conservancy was key in spearheading the campaign. Maher says he was also impressed by local communities’ support. “The islands are popular among locals and we’re pleased to be bringing them back for public use,” he said.

The promise of long-term protection for Wilson Island means the Lake Superior NMCA, which, at over 10,000 square kilometres, is the world’s largest swath of protected freshwater, will be better able to conserve the ecological values of the area. Development remains a concern within the NMCA because protection is only extended to the lakebed, water column and a select few islands (see https://onnaturemagazine.com/the-greatest-lake.html). More importantly, the partnership forged in completing the deal could establish a precedent for future bi-national conservation initiatives. “I’m hoping that this acquisition sets the tone for future cross border and international projects on the lakes that seem too challenging to tackle [on a] state by state basis or by the Province of Ontario,’’ said Doug Thompson, a representative of the U.S. Nature Conservancy in an interview with the Duluth News Tribune.

Check out the Wilson Island/NCC blog: