A Fish in the City 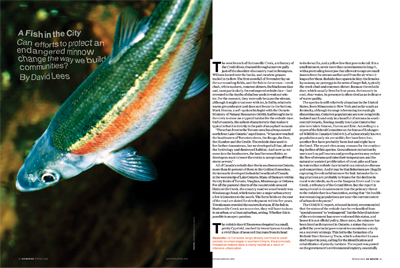 Can efforts to protect an endangered minnow change the way we build communities?

The west branch of Huttonville Creek, a tributary of the Credit River, churned through a narrow gully just off the shoulder of a country road in Brampton. Willows leaned over the banks, and meadow grasses trailed in its flow. The first snowfall of November lay on the surrounding fields, and the fish in the stream – creek chub, white suckers, common shiners, the blacknose dace and, most particularly, the endangered redside dace – had retreated to the depths of shallow pools to wait out winter. For the moment, they were safe because the stream, although it might crust over with ice, is fed by relatively warm groundwater and does not freeze to the bottom. Mark Heaton, a soft-spoken biologist with the Ontario Ministry of Natural Resources (MNR), had brought me to the creek to show me a typical habitat for the redside dace.

Unfortunately, the salient characteristic that makes it typical is that it is directly in the path of an asphalt tsunami.

“The urban front in the Toronto area has always moved north from Lake Ontario,” says Heaton. “It has now reached the headwaters of Toronto’s rivers, the Rouge, the Don, the Humber and the Credit. The redside dace used to live farther downstream, but we developed all that, altered the hydrology and destroyed habitat. And now as we move into the headwaters, the land becomes flatter, so developers want to lower the creeks to accept runoff from storm sewers.”

All of Canada’s redside dace live in southwestern Ontario, more than 80 percent of them in the Golden Horseshoe, the intensely developed industrial heartland of Canada at the western tip of Lake Ontario. Many of them are within the city limits of Toronto, Vaughan, Mississauga or Oshawa. For all the pastoral charm of the countryside around Huttonville Creek, the country road we stood beside was Mississauga Road, which turns into a major urban artery a few kilometres to the south. The farm fields on the east of the road are slated for development within five years. Townhouses crowded the eastern horizon. If the fish in Huttonville Creek are to survive, they will have to do so in an urban, or at least suburban, setting. Whether this is possible is an open question.

The redside dace (Clinostomus elongatus) is a small, pretty Cyprinid, marked by two stripes on its sides: a vivid blaze of neon red that runs from its head to its dorsal fin, and a yellow line that goes to its tail. It is a small minnow, never more than 12 centimetres in length, with a protruding lower jaw that allows it to capture small insects from the stream surface and from the air when it leaps after them. Redside dace spawn in May; the females lay as many as 1,900 eggs in the nests of larger fish, typically the creek chub and common shiner. Because the redside dace, which usually lives for four years, thrives only in cool, clear water, its presence is often cited as an indicator of water quality.

The species is still relatively abundant in the United States, from Minnesota to New York and as far south as Kentucky, although its range is becoming increasingly discontinuous. Ontario’s populations are now completely isolated and found only in a handful of streams in southcentral Ontario, flowing mostly into Lake Ontario but also into lakes Simcoe, Huron and Erie. According to a report of the federal Committee on the Status of Endangered Wildlife in Canada (COSEWIC), of 24 historically known populations only six are stable; five have been lost, another five have probably been lost and eight have declined. The report cites many reasons for the continuing decline of this species. Groundwater extraction by users such as golf courses and gravel quarries may reduce the flow of streams and raise their temperature; and the natural or assisted proliferation of trout, pike and bass in waters that redside dace inhabit can introduce disease and competition. And it may be that fishermen are illegally capturing the colourful minnow for bait. Intensive farming practices are probably to blame for the decline in rural watersheds, such as the Saugeen River and Irvine Creek, a tributary of the Grand River. But the report is unequivocal in its assessment that the primary threat to the redside dace is urbanization, noting that “the healthiest remaining populations are near the current extent of urban development.”

The COSEWIC report, released in 2007, recommended that the status of the redside dace be reclassified from “special concern” to “endangered,” but the federal minister of the environment has never endorsed this status, and hence it is not official policy. Since 2000, the minnow has been listed as threatened in Ontario, a status that compelled the provincial government to commission a study on a recovery strategy. This led to the formation of a Redside Dace Recovery Team, which submitted its own draft report in 2005, calling for the identification and rehabilitation of priority habitats. The report was posted on the government’s environmental registry, essentially a bulletin board inviting public comment on upcoming, environmentally sensitive government programs. But the recommendations have yet to be finalized or adopted. The chair of the team, Alan Dextrase, a biologist with MNR, acknowledged that after eight years of effort, he can point to no obvious success stories. “I don’t know of any population that has been improved,” he said.

But prospects for the redside dace are improving. In November, at about the same time as Heaton and I visited the Huttonville Creek, the Committee on the Status of Species at Risk in Ontario (COSSARO), a provincial counterpart to COSEWIC, recommended that the redside dace be reclassified from “threatened” to “endangered,” a designation that was to become official in February. Under the newly revised Ontario Endangered Species Act, the new listing will require MNR to develop regulations protecting not only the redside dace but also its habitat. But there will be limits to that protection, explained Dextrase. “You can’t say that the entire watershed is habitat for a species. It’s just not practical. So, as a first step, we’ll look for the protection of riparian areas, and at special ways of treating stormwaters. We’re going to have to do things differently. We’re going to have to work in partnership with developers. I think that’s the only way to go.”