Return of the Raptors 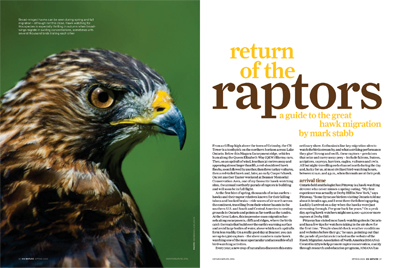 A guide to the great hawk migration

From a clifftop high above the town of Grimsby, the CN Tower is a toothpick on the northern horizon across Lake Ontario. Below this Niagara Escarpment ridge, vehicles hum along the Queen Elizabeth Way (QEW) like toy cars. Then, on an updraft of wind, less than 30 metres away and appearing almost larger than life, a red-shouldered hawk flies by, soon followed by another, then three turkey vultures, then a red-tailed hawk and, later, an early Cooper’s hawk. On yet another Easter weekend at Beamer Memorial Conservation Area, one of my favourite hawk-watching sites, the annual northerly parade of raptors is building and will soon be in full flight.

TIPS FROM THE MASTERS

3 Harriers
Northern harriers have dark “hoods,” long tails, a white patch on the rump and long, narrow wings. These birds glide with wings held in a slight V shape (dihedral).

5 Ospreys
Ospreys have white patches on the body and long, narrow wings, also with white patches, which look crooked in flight.

6 Turkey Vultures
Turkey vultures are large dark birds with long wings. Like the harrier, this species holds its wings in a dihedral when soaring.

The first step in identifying raptors is to get to know the shapes and body sizes the various species take in flight. Add to this some knowledge of typical behaviour and field marks, and you can start identifying species of migrating hawks. By visiting a hawk-watch site, you can pick up more tips from the masters, who, during lulls in the action, are more than willing to help out beginners.

At the first hint of spring, thousands of avian surfers – hawks and their raptor relatives known for their killing talons and hooked beaks – ride waves of air north across the continent, travelling from their winter haunts in the southern U.S. and South and Central America to nesting grounds in Ontario and points as far north as the tundra. At the Great Lakes, this impressive mass migration funnels along escarpments, cliffs and ridges, where the birds catch thermals that build over the earth’s warming surface and avoid large bodies of water, above which such updrafts form less readily. On a really good day at Beamer, you can see up to 1,500 raptors – the sheer numbers make hawk watching one of the most spectacular and accessible of all bird-watching activities.

Every year, a new crop of naturalists discovers this extraordinary show. Enthusiasts line key migration sites to watch the birds stream by, and what a striking performance they give! Strong and swift, these raptors – predators that seize and carry away prey – include falcons, buteos, accipiters, ospreys, harriers, eagles, vultures and owls. All but night-travelling owls channel north during the day and, lucky for us, at most civilized bird-watching hours, between 10 a.m. and 4 p.m., when thermals are at their peak.
Arrival time

Ontario field ornithologist Ron Pittaway is a hawk-watching devotee who never misses a spring outing. “My first experience was actually at Derby Hill in New York,” says Pittaway. “Some Syracuse birders visiting Ontario told me about it decades ago, and I went there the following spring. Luckily I arrived on a day when the hawks were just streaming through. I’ve gone back for years.” On a peak day, spring hawk watchers might see 2,000–4,000 or more raptors at Derby Hill.

Pittaway has visited most hawk-watching sites in Ontario and has a few tips for watchers taking in the air show for the first time. “People should check weather conditions and websites before they go,” he says, pointing out that the parade of predators is tracked on the website of the Hawk Migration Association of North America (HMANA). Created in 1974 to help promote raptor conservation, mainly through research and education programs, HMANA has helped turn hawk watching into both a mainstream and technically sophisticated activity. The website (www.hmana.org) provides charts to help plan an outing.

Says Pittaway: “The best spring viewing takes place immediately before and during the passage of a front from the south with gentle south winds.” The best flights at Derby Hill arrive with southeast winds.

As these large predators are energy conservation specialists, they follow predictable spring migration routes that minimize their need to refuel and enable them to “surf ” thermals that build over warming land masses. With wings fixed, the birds swirl upward until the rising air dissipates and sends them soaring to the bottom of the next rising pocket of air. Thermals are strongest during the day and do not develop well over water, so raptors arriving from the south “pile up” against the shores of lakes Erie and Ontario. To avoid the cold, thermal-free waters, the birds make their way around the lakes, either past Grimsby in the west – best viewed at Beamer Memorial Conservation Area – or past Derby Hill, at the southeast corner of Lake Ontario.

Ontario Nature executive director Caroline Schultz describes the spring aerial display as a “great activity” for just about anyone. “People bring along their lawn chairs and pack a lunch and Thermos. You can see all kinds of people at a place like Grimsby on a given spring day, and there are usually lots of people ready to help with identification. It’s particularly exciting to see kids and novice birders coming out to see this spectacle.”

The main spring migration spans March to May, with species such as red-tailed hawks and turkey vultures reaching the Great Lakes in early March. Red-shouldered hawks peak in late March, while broad-winged hawks concentrate their flights almost exclusively in late April and early May.

Throughout this period, certain birds have predictable peak times of day for migrating. For instance, sharp-shinned hawks, Cooper’s hawks and goshawks – all more inclined than more passive surfers to wing along on their own steam – power through in the morning, and then their numbers drop off as the day progresses and the raptors go bird-hunting.

Pittaway says adult breeding birds of each species are the first to arrive back in the spring, with the juvenile birds following later. Despite their long journeys, he adds that the hawks, with the odd exception, are in generally good condition in the spring.

Once you have observed this spring ritual, you will almost certainly return for the fall migration, an even more spectacular event in Ontario. Not only are the raptors more smartly attired with fresh feathers after their once-a-year summer moult, but they funnel through southern Ontario in even more spectacular numbers, to wind along the north shores of the lakes before heading toward the United States and points south. Prime viewing spots include Cranberry Marsh in Whitby, High Park in Toronto and Hawk Cliff south of St. Thomas. Numbers swell as the birds converge at Point Pelee and at Holiday Beach farther west, where up to 100,000 hawks have been seen in one season.

The best fall viewing conditions are the opposite of those in the spring, says David Brown, a volunteer and observer with the Hawk Cliff Foundation. “Large movements often follow a strong cold front with north and northwesterly winds that carry birds to the Great Lakes, where they pile up and follow the shorelines southwest.”

In fall, broad-winged hawks have the most concentrated migrations. These birds are no more socially interactive than other raptors, but they group together out of convenience – the easiest way for one to find the next thermal is to follow another broad-wing. Seeing these swirling concentrations, called “kettles,” sometimes with several thousand of birds trailing each other in one day, has turned many a naturalist into a lifelong hawk watcher.

Eagles, with a wingspan that can approach two and a half metres, are especially memorable to see in either season but are best known for their late October or early November flights. On November 1, 2008, watchers at Hawk Cliff experienced what may have been a once-in-a-lifetime thrill – a record 65 golden eagles passed the site. Brown was lucky enough to see the exceptional concentration of this rare northern breeder. “It was amazing,” he says. “At one point we averaged a golden every five minutes or so.”

Ideal viewing conditions in either season are cooler days with overcast skies. The birds are easier to see against clouds rather than blue sky are closer to the ground, as the thermals lifting the birds are weaker. Rain, snow or fog generally means minimal flights, though a few stalwart hawk watchers visit their posts in almost all weather conditions. I have a particularly fond memory of the late Bruce Duncan – one of Ontario’s pioneer hawk watchers – materializing from the rainy mist at Hawk Cliff to knock on my fogged-up car window and show me a peregrine falcon he had banded that morning.