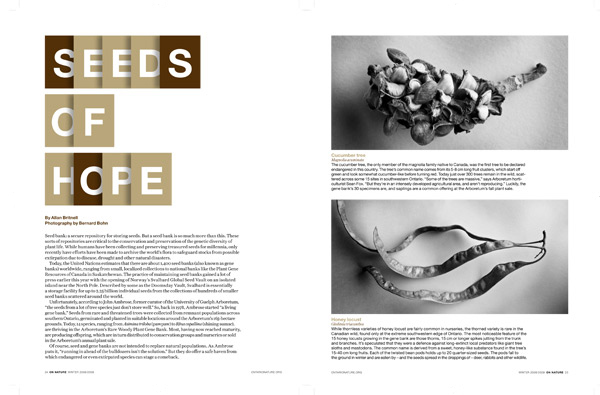 Seed bank: a secure repository for storing seeds. But a seed bank is so much more than this. These sorts of repositories are critical to the conservation and preservation of the genetic diversity of plant life. While humans have been collecting and preserving treasured seeds for millennia, only recently have efforts have been made to archive the world’s flora to safeguard stocks from possible extirpation due to disease, drought and other natural disasters.

Today, the United Nations estimates that there are about 1,400 seed banks (also known as gene banks) worldwide, ranging from small, localized collections to national banks like the Plant Gene Resources of Canada in Saskatchewan. The practice of maintaining seed banks gained a lot of press earlier this year with the opening of Norway’s Svalbard Global Seed Vault on an isolated island near the North Pole. Described by some as the Doomsday Vault, Svalbard is essentially a storage facility for up to 2.25 billion individual seeds from the collections of hundreds of smaller seed banks scattered around the world.

Unfortunately, according to John Ambrose, former curator of the University of Guelph Arboretum, “the seeds from a lot of tree species just don’t store well.” So, back in 1978, Ambrose started “a living gene bank.” Seeds from rare and threatened trees were collected from remnant populations across southern Ontario, germinated and planted in suitable locations around the Arboretum’s 165-hectare grounds. Today, 14 species, ranging from Asiminatriloba (pawpaw) to Rhuscopallina (shining sumac), are thriving in the Arboretum’s Rare Woody Plant Gene Bank. Most, having now reached maturity, are producing offspring, which are in turn distributed to conservation groups and nurseries or sold in the Arboretum’s annual plant sale.

Of course, seed and gene banks are not intended to replace natural populations. As Ambrose puts it, “running in ahead of the bulldozers isn’t the solution.” But they do offer a safe haven from which endangered or even extirpated species can stage a comeback.

The cucumber tree, the only member of the magnolia family native to Canada, was the first tree to be declared endangered in this country. The tree’s common name comes from its 5-8 cm long fruit clusters, which start off green and look somewhat cucumber-like before turning red. Today just over 300 trees remain in the wild, scattered across some 15 sites in southwestern Ontario. “Some of the trees are massive,” says Arboretum horticulturist Sean Fox. “But they’re in an intensely developed agricultural area, and aren’t reproducing.” Luckily, the gene bank’s 30 specimens are, and saplings are a common offering at the Arboretum’s fall plant sale.

While thornless varieties of honey locust are fairly common in nurseries, the thorned variety is rare in the Canadian wild, found only at the extreme southwestern edge of Ontario. The most noticeable feature of the 15 honey locusts growing in the gene bank are those thorns, 15 cm or longer spikes jutting from the trunk and branches. It’s speculated that they were a defence against long-extinct local predators like giant tree sloths and mastodons. The common name is derived from a sweet, honey-like substance found in the tree’s 15-40 cm long fruits. Each of the twisted bean pods holds up to 20 quarter-sized seeds. The pods fall to the ground in winter and are eaten by – and the seeds spread in the droppings of – deer, rabbits and other wildlife.

Though relatively common in the northeastern United States, cherry birch is endangered in Canada, with only one known cluster of 14 trees remaining along the southeastern Lake Ontario shoreline, at Port Dalhousie. Residential development and damage from storms coming in off the lake have steadily decimated the population since 50 or so were first documented in 1967, making the 18 seed-bearing trees in the Arboretum’s collection particularly important. “If that [wild] population is ever lost, this is the only remnant in Ontario,” says Fox. Luckily, the trees are thriving and bearing thousands of 2-3 cm long fruits, each of which contains dozens of individual seeds.

As part of the Arboretum’s famed Elm Recovery Project (ERP), elms are something of an offshoot of the gene bank. Dutch elm disease, a lethal fungus spread by bark-tunneling beetles, was introduced to Canada around 1944. Within three decades, about 80 percent of the elms in the city of Toronto alone had been killed and the species has been virtually wiped out in southern Ontario. Through the ERP, the few remaining disease-resistant elms were located and cloned. Arboretum staff are currently testing clones from 34 of the most promising specimens for continued disease resistance and hope that one day they will produce viable seeds for elm reintroduction to the wild. The fibrous material around the 2 cm-long seeds helps aid airborne dispersal.

Shellbark hickory, also known as kingnut, often gets the word “big” added to its common name, and deservedly so. Its edible seeds, at 5 cm or more in diameter, are the largest of any hickory species in the world. The gene bank has 18 specimens grown from seeds gathered at seven sites across southern Ontario. Hickory is a tricky species to cultivate when young, explains Fox. “For hickory [seeds], the shelf life is so short that, ideally, you’d always want to have some producing.” About two years ago, when one tree in their collection started to produce seeds, Fox admits, “seeing those nuts was a thrill.”

While threatened in Canada – found only at 25 sites in the Niagara area – Kentucky coffee-trees have thrived at the Arboretum. A dozen of the 64 specimens in the gene bank produce long pods (the species is a member of the pea family) that contain up to seven seeds each. For the seeds to be fertile, though, insects must first transport pollen from the flowers on male coffee-trees to those on female trees. It gets its common name from early settlers’ practice of roasting the tree’s seeds to use as a coffee substitute. “I’ve never tried it, but I can’t imagine it was very good,” says Ambrose, adding an important caveat: “The plant is a bit toxic, so I’d want to be careful about experimenting with it.”

The chinquapin oak has been a great success story for the gene bank. Staff have harvested 1.5-2 cm long acorns from the Arboretum’s 52 specimens and distributed them to various nurseries through the Ontario Tree Seed Plant. But Fox would like to see even more of them out there. Describing chinquapins as “ideal street trees,” he says they are well suited for the urban jungle. “They’re really easy to grow, very tough plants that shoot up quickly.” They also have a fairly large native range in the province that stretches from the far eastern shores of Lake Ontario to the southwest tip of the Lake Erie shoreline.

Pawpaw is just one of a number of unique names – others include custard apple or poor man’s banana – given to this small, shrublike tree. Fox says the edible 15 cm-long fruit – which holds two rows of bean shaped seeds – has a banana-like texture and a taste reminisent of banana or pineapple “that grows on you.” More important than its flavour, however, are chemicals called acetogenins found in the fruit and twigs of the pawpaw; in laboratory testing these chemicals have been shown to have cancer-fighting properties. The tree’s rare status in Canada also threatens the existence of the zebra swallowtail butterfly, whose caterpillars feed exclusively on pawpaw foliage.

Allan Britnell is a Toronto-based writer who contributes frequently to ON Nature. His articles have appeared in Cottage Life, Canadian Geographic and Toro.