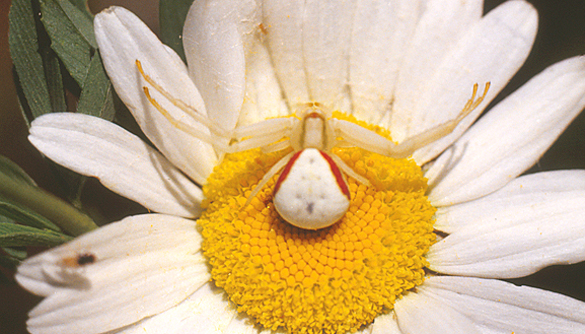 by Dan Scneider and Peter Pautler

Spiders are master weavers and use their silk – which has greater tensile strength than steel and twice the elasticity of nylon – for various purposes: to immobilize prey, to craft egg cases, safety lines and shelters, as dispersal parachutes and for sexual communication.

But the silken construction we are most familiar with is the orb web. To create it, an orb weaver lets a sticky silk strand drift on the breeze and then reinforces the strand once it adheres to something. Next, the spider drops from the middle of this first line to form a “Y,” the first of many supporting spokes. After completing the non-sticky frame and spokes, the web master produces silk on which tiny glue droplets sit and weaves a sticky spiral. From start to finish a web, which can contain up to 20 metres of silk and 1,000 to 1,500 connections, may be created in a mere 30 minutes. A spider can weigh more than 1,000 times the weight of the web in which it lives. Orb weavers will eat and remake webs every few days – or sometimes daily – recycling 90 percent of the silk used for the original web.

When summer slips into fall, the insect population balloons to astronomic proportions – a feast for birds and bats, as well as for an insect’s primary predator: spiders.

Evolution has equipped spiders with myriad techniques for capturing prey: jumping spiders leap, crab spiders ambush, wolf spiders give chase, webs entrap. The earliest spider fossils date back 300 million years, and the creatures probably developed at least 100 million years before that, during the Devonian period. No other group of animals has been hunting insects so efficiently for so long.

Most spiders use venom, delivered from an opening in their chelicerae (jaws), to subdue and predigest prey. In Ontario, only the rare northern widow spider is considered dangerous to people.

Both insects and spiders are arthropods (invertebrates with jointed legs). Insects form one class of arthropods, while spiders are an order – a level that is subordinate to a class – of arachnids. Other arachnids include harvestmen (daddy-long-legs), scorpions, ticks and mites. Spiders differ from insects in having eight rather than six legs, simple rather than compound eyes, two main body parts (one of which is the cephalothorax – a fused head and thorax) instead of three, no antennae and, of course, no wings.

The last warm days of autumn are ideal for examining spiders. Early morning dew or frost reveals webs that are nearly invisible at other times. Some adult spiders do not live past the fall season, while others overwinter under bark, in leaf litter or in other shelters.

Spiders as a whole can be a daunting group to identify, but learning how to discern certain family characteristics will make the task much easier.

Like their namesake, crab spiders extend their legs to the sides. The second pair of legs is longer than the other pairs, and each leg has two claws at the end. Crab spiders climb in and around plants in search of prey, which they ambush.

Flower, or goldenrod, spiders (Misumena vatia) are yellow or white with red streaks on each side of the abdomen. Females measure five to 10 millimetres, and males are even smaller, at three to four millimetres in length. Capable of changing colour from white to yellow to match the flower on which it sits, the flower spider waits motionless to ambush nectar-seeking insects.

Join Spider WebWatch (www.spiderwebwatch.org), a biodiversity monitoring project, and report the presence and location of indicator species. Doing so provides important information about the distribution, habitat and population changes of spiders.

House, or domestic, spiders are typical cobweb weavers, possessing a large, globular abdomen and very long legs. The spider uses a comb of curved bristles (setae) on the fourth pair of legs from the front to throw silk strands over insect prey that has become entangled in the messy webs. Once the prey is so cloaked, the house spider injects poison into its victim, drags it further into the web and sucks the juices from the now lifeless prey.

The northern black widow (Latrodectus variolus) is one of the largest cobweb weavers. Females are 12 to 16 millimetres in length – significantly larger than males, at 10 to 12 millimetres, although the males possess longer legs and narrower abdomens.

Northern black widows spin messy webs on stumps or logs, under stones, in holes and occasionally in barns and rural privies. After mating, the female often devours the male. Northern black widows do bite people. Although the bite is painful and may cause laboured breathing and severe abdominal pains, it is rarely fatal.

The large, grey wolf spider is a nocturnal hunter. Its cephalothorax and abdomen are as long as they are wide, and its long, hairy legs have protruding spines. With eight eyes of unequal sizes arranged in three rows on the front of the cephalothorax, wolf spiders have excellent vision, as well as a keen sense of touch. These spiders are ground dwellers that chase their prey rather than use web snares or traps. The thin-legged wolf spider (Pardosa xerampelina) is a swift runner that can chase prey over great distances.

Tetragnathids are long, slender spiders with prominent chelicerae (jaws) that are two-thirds the length of – or longer than – the cephalothorax. These spiders hide in grass, extending their long first, second and fourth pairs of legs lengthwise while clinging to blades of grass with their much shorter third pair of legs. Their webs are small orbs with few radiating supports and are often suspended at an angle between branches of shrubs.

The long-jawed spider (Tetragnatha laboriosa) is pale yellow and silver with dark grey below on the abdomen. Because of its poor vision, this spider keeps to one side of its web with one leg touching a supporting line to sense the vibrations of a trapped insect. If disturbed, the spider will drop to the ground out of sight.

With its long legs and large grey brown body, the nursery web spider resembles a wolf spider in appearance but not in behaviour. The nursery web weaver, which is known to have good vision, will run after prey over land, skate across water surfaces chasing aquatic insects and dive underwater in pursuit of a meal.

The huge, brownish grey fishing spider (Dolomedes tenebrosus) is a formidable hunter. With a leg span of more than 80 millimetres and a body length of up to 26 millimetres, this fishing spider ranges far and wide across the forest floor, along streams and ponds and on the water’s surface in pursuit of aquatic insects. It has even been known to dine on small tadpoles and fish.

Orb weavers number more than 2,500 species worldwide, and several hundred species in North America. Nearly all produce a spiraling orb web with strong support lines that make for a highly effective insect snare. Orb weavers rotate trapped insects with their forelegs while their hind legs pull out silk from the spinnerets to wrap the victim. Despite possessing eight eyes – arranged in two rows of four – an orb weaver’s vision is poor, rendering it dependent on sensing vibrations from its web.

The striking black and yellow argiope (Argiope aurantia) is one of the largest orb weavers. Silver hairs adorn the upper half of the cephalothorax, and yellow and orange markings contrast with the black, egg-shaped abdomen. Females, ranging in length from 19 to 28 millimetres, are three times the size of males, at fi ve to nine milliimetres. Their webs are large orbs with extra zigzags of silk (called a stabilimentum) woven across the middle.

As its name suggests, the jumping spider pounces on its prey. These small-to medium-sized spiders have sharp, binocular vision, the result of two disproportionately large eyes located at the front of the cephalothorax. The jumping spider stalks its prey and then makes a leap, setting down a dragline of silk in case it misses. Rather than build webs, jumping spiders weave silken retreats in which they moult, rest and hibernate.

A common species, the three-spotted jumping spider (Phidippus audax) is found throughout southern Ontario woods on tree trunks and fallen logs, in ground litter and under stones. Males are approximately 13 millimetres in length, and the bigger females grow to 15 millimetres.

This family of spiders typically constructs a funnel-shaped web close to the ground. Also known as grass spiders, agelenids conceal themselves in the narrow end of the funnel and wait for insects to stumble into it. When the spider senses a vibration, it charges out and subdues its victim with a paralyzing bite.