The barcode of life project 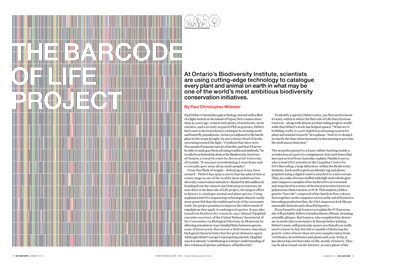 At Ontario’s Biodiversity Institute, scientists are using cutting-edge technology to catalogue every plant and animal on earth in what may be one of the world’s most ambitious biodiversity conservation initiatives.

Paul Hebert’s breakthrough in biology started with a flick of a light switch on the island of Papua New Guinea more than 30 years ago. Armed with plenty of notebooks, moth catchers, and a recently acquired PhD in genetics, Hebert had come to the lush island to catalogue its teeming moth and butterfly populations. As his eyes adjusted to the harsh glare in the tropical night, he saw a dense cloud of moths swarming toward the light. “I realized that there were thousands of separate species of moths, and that I’d never be able to catalogue them all using traditional methods,” he recalls from behind his desk at the Biodiversity Institute of Ontario, a research centre he directs at the University of Guelph. “It was just overwhelming. I went home and eventually gave away all my moth samples.”

From that flash of insight – defeating as it may have seemed – Hebert has spun a career that has placed him at centre stage in one of the world’s most ambitious biodiversity conservation initiatives. Backed by $80 million in funding from the Ontario and federal governments, he now directs the Barcode of Life project, the largest effort in history to catalogue animal and plant species. Using sophisticated DNA sequencing technologies that are vastly more powerful than the traditional tools of the taxonomic trade, the project promises to improve the enforcement of regulations that apply to endangered species. It may also transform biodiversity research, says Ahmed Djoghlaf, executive secretary of the United Nations’ Secretariat of the Convention on Biological Diversity in Montreal, by allowing scientists to trace familial links between species, some of them newly discovered or little known, that share biological characteristics but live great distances apart. Although Hebert’s project is just getting started, Djoghlaf says it is already “contributing to a deeper understanding of the evolution of species, and hence, of biodiversity.”

To identify a species, Hebert notes, you first need to know it exists, which is where the Barcode of Life Data Systems comes in – along with almost 300 barcoding projects worldwide that Hebert’s work has helped spawn. “What we’re building, really, is a sort of global positioning system for plant and animal research,” he explains. “And we’re doing it at exactly the time when humanity is threatening to provoke the sixth mass extinction.”

The 95 moths pinned to a foam-rubber backing inside a wooden box are part of a consignment of 40 such boxes that have just arrived from Australia, explains Natalia Ivanova, who is lead DNA scientist at the Canadian Centre for DNA Barcoding, a large laboratory within the Biodiversity Institute. Each moth is given an identity tag and photographed using a digital camera attached to a microscope. Then, in a suite of rooms stuffed with high-tech robotic gear and computers, samples of the moth’s DNA are extracted and sequenced in a series of chemical processes known as polymerase chain reaction, or PCR. This analysis yields a genetic “barcode” composed of 650 bands in four colours. Seen together on the computer screen at the end of Ivanova’s barcoding production line, the DNA sequences look like an unusually intricate and colourful tapestry.

If you hazard to ask Ivanova to explain the PCR process, she will probably deliver a bombardment of brain-straining scientific phrases. But Ivanova, who completed her doctorate in molecular systematics in Russia before joining Hebert’s team, will graciously assure you that all you really need to know is that this lab is capable of deducing the genetic codes of more than 200,000 samples taken from vertebrates, invertebrates and plants each year. So far, it has about 840,000 barcodes on file, mostly of insects. They can be all accessed via the Internet, as can a photo of the specimen and information on where it was collected, where it currently resides and other details.

The Australian moths are just a few of the roughly 25,000 samples the lab receives and analyzes every month, submitted from around the world for the Barcode of Life project. With an estimated 10 million species to be catalogued, Hebert’s goal is nothing less than recording a DNA barcode for every living species.

Hebert, 64, has always been interested in classifying nature, a painstaking process known as taxonomy, in which biologists study specimens and produce carefully written descriptions that are then classified according to a complex hierarchy. From the days when, as a child, Hebert collected bugs on summer holidays in Ontario forests, the obsession propelled him first to summer jobs cataloguing insects at the Royal Ontario Museum, then to a doctorate in genetics at Cambridge University and eventually into the vastly diverse forests of New Guinea.

After the island’s phenomenal fecundity thwarted his taxonomic ambitions, Hebert returned to Canada, took teaching jobs that led him to the University of Guelph and focused his research on the evolution of a handful of insect species in the Arctic – a place where the diversity had no chance of overwhelming him. But he stayed abreast of DNA research, and through the 1990s he watched with fascination as ever more efficient and inexpensive DNA sequencing techniques emerged. That same decade, he got involved in DNA cataloguing by building a prototype lab capable of sequencing gene regions for a dozen or so specimens a week – in essence, molecularly decoding how life forms are programmed. But it was not until the invention of fully automated sequencing systems, able to process thousands of samples daily, that Hebert had his “Eureka!” moment: using this rapid, low-cost DNA sequencing technology, he could develop an inventory of the vast number of species facing extinction. He has been doing that ever since.

Hebert’s project is rooted in millennia of research. Scientists have been trying to catalogue nature at least since the days of Aristotle, who first proposed a “great chain of being” based on rudimentary taxonomies about 2,400 years ago. But it was the 18th-century Swedish naturalist Carolus Linnaeus, whose taxonomic hierarchy divides nature into progressively smaller categories, who showed that careful classification opens the way for major discoveries. As Charles Darwin demonstrated with the theory of evolution that drew from the catalogues Linnaeus and his followers assembled, taxonomy can yield utterly transformative breakthroughs.

How the Barcode of Life may eventually help science is impossible to predict, but assembling a database that in time yields a planetary species count should greatly advance “biological literacy,” says Hebert. Most immediately, it will make harvesting of endangered species for commercial use more difficult. After all, he notes, if a fisheries investigator can run a quick DNA test on a boat’s haul and cross-reference it with the barcode database, illegal practices can be far more easily policed.