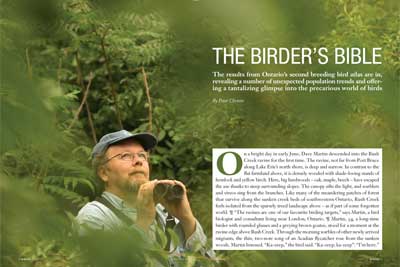 The results from Ontario’s second breeding bird atlas are in, revealing a number of unexpected population trends and offering a tantalizing glimpse into the precarious world of birds

On a bright day in early June, Dave Martin descended into the Rush Creek ravine for the first time. The ravine, not far from Port Bruce along Lake Erie’s north shore, is deep and narrow. In contrast to the flat farmland above, it is densely wooded with shade-loving stands of hemlock and yellow birch. Here, big hardwoods – oak, maple, beech – have escaped the axe thanks to steep surrounding slopes. The canopy sifts the light, and warblers and vireos sing from the branches. Like many of the meandering patches of forest that survive along the sunken creek beds of southwestern Ontario, Rush Creek feels isolated from the sparsely treed landscape above – as if part of some forgotten world.

Despite its decidedly southern name, the Nashville warbler is Ontario’s most abundant bird by far. According to bird population estimates in the new Atlas of the Breeding Birds of Ontario, 2001-2005, some 15 million Nashville warblers call Ontario home during the summer. That’s approximately three million more than the population of any other bird species in the province.

“We’ve had a lot of fun with this, going around to various nature clubs in the province and asking them to guess the commonest bird,” says Mike Cadman, a songbird biologist with the Canadian Wildlife Service who coordinated the atlas project. “They never get anywhere close.”

Unlike the first breeding bird atlas, the most recent atlas includes population estimates for 124 bird species based on 62,000 “point counts.” The point counts record the number of each species counted by atlas volunteers while standing in one spot. Population estimates were limited to mainly songbirds that could easily be heard or spotted during a stop along the road.

While Nashville warblers stand alone at the top of the numbers heap (“one Nashville warbler for every person in the province,” jokes Cadman), other boreal bird species – including white-throated sparrow, yellow-rumped warbler, magnolia warbler, golden-crowned kinglet, dark-eyed junco and chipping sparrow – share second place with populations estimated to be about 12 million each. For many of these birds, more than 90 percent of their populations occur in the vast forests of northern Ontario.

Among the smallest population numbers calculated are for southern birds that have recently been expanding their ranges north in Ontario, such as northern mockingbirds (a population of about 9,000 birds) and Carolina wrens (about 4,000). Chimney swifts, upland sandpipers and northern rough-winged swallows are all declining species according to atlas data, and all show correspondingly low population estimates (about 8,000, 9,000 and 15,000, respectively).

“The ravines are one of our favourite birding targets,” says Martin, a bird biologist and consultant living near London, Ontario.

Martin, 54, a long-time birder with rounded glasses and a greying brown goatee, stood for a moment at the ravine edge above Rush Creek. Through the morning warbles of other newly arrived migrants, the thin, two-note song of an Acadian flycatcher rose from the sunken woods. Martin listened. “Ka-zeep,” the bird said. “Ka-zeep, ka-zeep”: “I’m here.”

The Acadian flycatcher is an endangered species in Canada, and its sparse population in this country can be found primarily in the Carolinian region of southwestern Ontario. As recently as 2005, Acadian flycatchers were thought to have dwindled to no more than 35 pairs in Canada. That Acadian flycatcher populations may be finally gathering strength in Ontario is one of the many heartening tales to emerge from the new Atlas of the Breeding Birds of Ontario, 2001-2005.

The atlas, which is to be published late this fall, compiles bird records collected by some 2,500 volunteers like Martin, who was also the London-area regional coordinator for the atlas. These citizen scientists devoted more than 152,000 hours over the first five years of this decade to tromping through the province’s fields, fens and forests looking for birds. They searched for nests, singing males, fledglings or any other evidence that the feathered creatures were breeding and raising young.

The book – a joint project of Ontario Nature, Bird Studies Canada, the Canadian Wildlife Service (CWS), Ontario Ministry of Natural Resources and the Ontario Field Ornithologists – is the much-anticipated follow-up to the first Atlas of the Breeding Birds of Ontario published in 1987. That atlas, based on a similar survey conducted between 1981 and 1985, provided the first detailed glimpse of bird distributions in Ontario. The second atlas does the same again, but also attempts to answer a question that goes to the heart of bird conservation in this province: what has changed in the past 20 years?

The second atlas provides a comparison of the survey results gathered for this atlas with those gathered for the first one. During the preparation for each atlas, researchers compiled volunteer observations to track whether or not bird species may be breeding in each of the 10-by-10-kilometre squares that comprise a grid dividing up the province (1,824 squares in the southern half and more than 100 100-kilometre-square blocks in the north). Comparing the two surveys allows the new atlas to reveal changes in bird distributions from two decades ago by noting changes in the number of squares in which birds are found. These changes, in turn, show how well bird populations are doing in Ontario – birds found in more places in the second survey are probably better off than birds whose distributions shrank since the first atlas.

For Acadian flycatchers, for instance, the picture is a little rosier. Martin and other volunteer birders discovered breeding evidence for the small, olive songbird in 50 of the atlas squares compared to similar evidence found in just 29 squares 20 years ago. But the comparison is not that simple because the number of volunteers and the amount of time birders spent looking for the birds differed between the first atlas survey and the second. To take this into account, the new atlas uses the number of squares in which birds appear to calculate how “likely” it is that these birds will be found in a square. This probability – not the number of squares – provides a measure of how prevalent birds are in the province that can be compared between the two atlas surveys. Thus, the atlas records for Acadian flycatchers suggest that the likelihood of encountering breeding evidence for this bird improved by 88 percent in the two decades since the first atlas survey.