The dark side of light 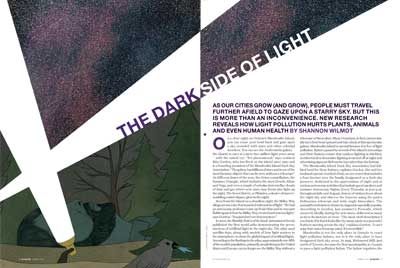 As our cities grow (and grow), people must travel further afield to gaze upon a starry sky. But this is more than an inconvenience. New research reveals how light pollution hurts plants, animals and even human health

On a clear night on Ontario’s Manitoulin Island, you can crane your head back and gaze upon a sky crowded with stars and other celestial wonders. You can see the Andromeda galaxy – the closest to ours at a mere two million light years away – with the naked eye. “It’s phenomenal,” says resident Rita Gordon, who has lived on the island since 1990 and is a founding president of the Manitoulin Island Dark Sky Association. “The galaxy has billions of stars and is one of the most faraway objects that can be seen without a telescope.” At different times of the year, the Orion constellation, the Summer Triangle, which includes the stars Deneb, Altair and Vega, and even a couple of nebulas (interstellar clouds of dust and gas where new stars may form) also light up the night. The Seven Sisters, or Pleiades, a cluster of stars resembling a mini-dipper, glow in the night.

Night moves
For more than a century, naturalists have observed the connection between light and the phenomenon of bird migration. George Romanes, friend of Charles Darwin, notes in his 1883 work Mental Evolution in Animals, “I think it is not very improbable that [birds’] sense of direction may be greatly assisted by observing the direction of the sun … and it appears that on very dark and cloudy nights migratory birds are apt to become confused.” Artificial light began wreaking havoc on migratory birds with the appearance of modern lighthouses. Lighthouse keepers noticed high numbers of nighttime bird casualties around the structures, especially on nights of low cloud cover or heavy fog.

While we still have much to learn about why birds are disoriented by artificial light, the proof of its detrimental effect is everywhere. In 1954, a ceilometer – an instrument used by airports to gauge cloud cover by pointing a powerful, fixed beam of light onto a cloud base – on a Georgia air force base was found responsible for the deaths of approximately 50,000 birds over the course of just one night. Onlookers witnessed birds circling in the beam of light and crashing into each other.

The impact of artificial light on the animal world can be varied and subtle. A 2005 study that appeared in The Condor, published by the United States–based Cooper Ornithological Society, concluded that artificial light is altering the singing times of the American robin. In areas where artificial light had become especially intense, robins sang between 30 minutes and three hours earlier than is typical. While these changes may translate into increased foraging time, it is also thought that an earlier awakening could make the birds easier prey for nocturnal predators.

Other studies indicate that the reproductive habits of certain nocturnal frog species that are dependent on extremely low illumination have been altered. Says Mark Carabetta, Ontario Nature’s conservation science manager, “The impact of artificial lighting on amphibians is only now beginning to gain attention. Because many frogs and salamanders are nocturnal breeders, they are especially vulnerable to the effects of light pollution. Several studies have demonstrated that amphibian behaviour is affected by the presence of artificial light in a way that influences population dynamics. For example, when exposed to artificial light, male green frogs call less frequently and spend more time moving from place to place.”

“Many nocturnal insects have their navigation systems disrupted by artificial lights, as evidenced by the poor moths fluttering around any porch light on a summer night,” says Steve Marshall, professor of entomology at the University of Guelph. “I am unaware of any studies showing that light pollution has had a widespread impact on insect populations. Although I have speculated that artificial light may have contributed to the decline of some species like the now extirpated giant lacewings.”

Despite the gradual accumulation of research on the impacts of light pollution, ongoing urban sprawl and the misuse of artificial lighting ensures that the effect on animal behaviour will continue to alter the province’s natural landscape.
Jim MacInnis

Seen from the island on a cloudless night, the Milky Way slings across a sky that is packed with pricks of light. “We had an astronomy professor come up from Ohio and he was just flabbergasted that the Milky Way created such intense light,” says Gordon. “You just don’t see that anymore.”

In 2001, the Monthly Notices of the Royal Astronomical Society published the first world atlas demonstrating the pervasiveness of artificial light in the night sky. The atlas used satellite data, along with models of how light scatters in the atmosphere, to show the global impact of artificial lights. According to the findings in the atlas, approximately one-fifth of the world’s population, primarily people living in the United States and Europe, can no longer see the Milky Way without a telescope or binoculars. Many Ontarians, in fact, cannot simply turn their head upward and take a look at this spectacular galaxy. Manitoulin Island is special because it is free of light pollution. Bylaws passed by several of the island’s townships and First Nations ensure that outdoor lighting is shielded, architectural or decorative lighting is turned off at night and advertising signs are lit from the top rather than the bottom.

The Manitoulin Island Dark Sky Association had lobbied hard for these bylaws, explains Gordon. She and her husband operate Gordon’s Park, an eco-resort that includes a four-hectare area the family designated as a dark-sky preserve, dedicated to the appreciation of night and to various astronomy activities that include guest speakers and summer Astronomy Nights. Every Thursday at 9:00 p.m. throughout July and August, dozens of visitors learn about the night sky and observe the heavens using the park’s Dobsonian telescope and wide-angle binoculars. The annual Perseid meteor shower in August is especially popular. According to Gordon, last summer’s Perseids, which occurred, ideally, during the new moon, delivered as many as 60 to 80 meteors an hour. “The most vivid description I can think of is that it looks like the many spots on a peacock’s feathers moving across the sky,” explains Gordon. “I can’t wipe that vision from my mind. It’s incredible.”

Manitoulin is not the only place in Ontario to enact light pollution bylaws, nor is it the only place to have designated dark-sky areas. In 1995, Richmond Hill, just north of Toronto, became the first municipality in Canada to pass a light pollution bylaw. The bylaw regulates the installation, illumination levels, hours of operation and replacement of lighting fixtures in both commercial and residential areas. In 1999, more than 1,900 hectares in the Muskoka area became the Torrance Barrens Dark Sky Reserve, the first designated dark-sky area in Canada, recognized by the Royal Astronomical Society’s Light Pollution Abatement Program. More recently, the program recognized the conservation efforts of Point Pelee National Park, in southwestern Ontario, with a dark-sky designation.

Yet despite these efforts, few of us can enjoy an unobstructed view of the sky at night. Light pollution, caused by unshielded, misdirected and overpowered lights, obscures our view, bathing many of Ontario’s cities and towns in the glow of an eerie perpetual twilight.

Simply put, light pollution is light that goes where it doesn’t belong – illumination from floodlights spilling into neighbouring yards, unshielded street lights casting light upwards and horizontally. Gas stations and mall parking lots are the most egregious light pollution offenders in the city. “You can practically do brain surgery under some gas-station canopies,” says Robert Dick, who manages the Light Pollution Abatement Program and teaches astronomy at Carleton University. Architectural, or decorative, lights that are set on the ground and pointed upwards to illuminate the front of a building or trees in a front yard are another big offender. But artificial light at night doesn’t just block the view. Researchers are beginning to discover its adverse environmental effects on wildlife as well as negative impacts on human health.