The fight for the forest 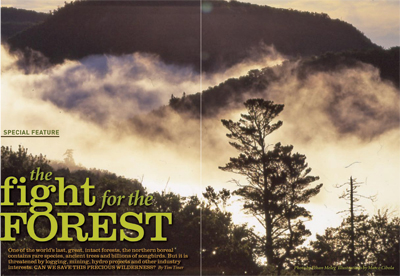 One of the world’s last, great, intact forests, the northern boreal contains rare species, ancient trees and billions of songbirds. But it is threatened by logging, mining, hydro projects and other industry interests. Can we save this precious wilderness?

Larger than the Amazon rain forest, the great North American boreal forest (more than 5 million square kilometres) stretches from Newfoundland to Alaska. It represents one-quarter of the earth’s surviving original forest, 750,000 square kilometres of which are within Ontario. Although the boreal ecosystem is austere, it is nevertheless a haven for billions of migratory birds and for the continent’s largest populations of winter-adapted mammals: wolves, caribou, wolverines, lynx and moose.

Like the Amazon rain forest, the boreal is being rapidly altered on a vast scale. Roughly two hectares of Canada’s boreal forest are clearcut every minute. In Ontario, logging clears an area up to three and a half times the size of Toronto every year; some 62,000 kilometres of logging roads have fragmented the southern half of the province’s boreal region. With forestry operations nearing the current cutline, roughly along the 51st parallel north of Hearst in the east to Red Lake in the west, the province is considering extending logging into the largest block of intact boreal forest – 370,000 square kilometres of the province – remaining in Canada.

Approximately 4,400 mining claims have been staked across Ontario’s northern boreal forests. More than 1,000 square kilometres in the Moose River basin in northeastern Ontario have been staked for possible coal bed methane wells. Our energy needs have spurred proposals for new generating dams on rivers in the far north and a hydro corridor spanning the region to bring electricity from northern Manitoba.

Ontario Nature and other groups campaigning to protect the boreal forest are demanding that Premier Dalton McGuinty fulfill a pre-election pledge he made in March 2003 to “institute meaningful, broad-scale land-use planning for Ontario’s northern boreal forest before any new major development” is permitted. The Boreal Forest Conservation Framework, drawn up by a coalition of national conservation organizations, First Nations communities and several resource companies, calls for approximately half of the northern boreal forest, both nationally and provincially, to be set aside in an interconnected network of parks, wildlife refuges and other protected areas. The remaining area would be managed under strict guidelines for sustainable development. At present, only 5 percent of the northern boreal forest is protected in Ontario.

Says Wendy Francis, Ontario Nature’s director of conservation and science, “A lot of economic interests … have their eyes on Ontario’s remaining intact boreal forest. Economic development is not a bad thing, but it needs to happen in a way that protects global values.”

The northern hemisphere’s boreal zone contains 80 percent of the planet’s unfrozen fresh water and sequesters 136 billion tonnes of carbon in its 8,000- to 10,000-year-old accumulations of peat, thus slowing climate change. The intense burst of plant and, especially, insect life during the brief growing season in Canada’s boreal region draws one to three billion migrant landbirds from as far away as South America every year, including three-quarters of the country’s warblers and two-thirds of its sparrows and thrushes. Every spring, one in three of all landbirds in the United States is a migrant headed for the boreal forest. Tens of millions of waterfowl, waders and shorebirds fly to the innumerable wetlands, rivers and lakes of Canada’s boreal region to nest.

Frequent wildfires and outbreaks of defoliating insects renew huge swathes of the landscape. The result is a remarkably varied patchwork of habitats. Dense carpets of new growth mix with older stands of black spruce and fir, laced with mazes of grey-green lichen-covered clearings. There are pockets of aspen and birch, jack pine ridges, expansive open mats of bright green and yellow muskeg, wavy-lined sting bogs, beaver ponds, meadows, marshes and creeks, and rivers and lakes of every size and description.

Large-scale mechanized logging and fire suppression dramatically shift the natural pattern of the boreal mosaic. The University of Toronto’s faculty of forestry conducted surveys in the Cochrane–Kapuskasing clay belt area and found that the tendency of clearcutting to convert black spruce forests into second-growth mixed or poplar woods usually eliminates less common conifer forest gems such as moccasin flower, rattlesnake plantain and pinedrops. Little of the immense variety of mosses, lichens and mushrooms that vibrantly colour a northern spruce forest floor is evident in woods in which deciduous trees are dominant. “Once a system shifted to a different state, it stayed like that,” says U. of T. forest vegetation ecologist Terry Carleton, noting that the original spruce forest has rarely returned since mechanized clearcutting began in the area in 1922.

Logging can destroy an estimated 45,000 migratory birds’ nests in a single year in Ontario, and new studies are also finding marked differences between avian communities located in regenerating clearcuts, and those located in young post-fire forests. “You certainly find more snag-nesting species [in a burn],” says Ryan Zimmerling, a research associate with Bird Studies Canada. “Timber operations can’t leave as many snags as a wildfire would.”

In three summers of field work in northern Ontario, Zimmerling found lots of grassland and open habitat birds, such as alder flycatchers, ruby-crowned kinglets, and chipping and Lincoln’s sparrows, in young post-harvest forests, but the number of species declined as the stands aged. No similar decline occurred in aging post-fire forests, which had more snag- and shrub-loving birds, including winter wrens, brown creepers, red-breasted nuthatches and white-throated sparrows.

Logging, mining and other resource extraction could even have long-term consequences for the boreal forest’s invertebrate composition. U. of T. forestry department staff in northeastern Ontario discovered that some 30 species of hoverflies, whose larvae feed in downed wood, were absent or significantly diminished at logged sites. The faculty’s Jay Malcolm notes that their absence has a potential impact on their predators and parasites and on up the food chain.

“If you look at where we’ve already had development, south of the limit of logging, it’s terribly fragmented and heavily roaded, and the impacts of that are seen in what’s happened to the range of the endangered woodland caribou and the wolverine, both of which have been pushed further and further north,” says Francis. “We have an obligation and the ability to do something different in Ontario.”

Listed here are just 10 of the at-risk species that depend on an intact boreal forest ecosystem.