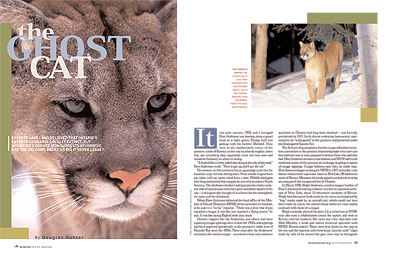 Experts have long believed that 0ntario’s eastern cougar is locally extinct. But mounting evidence now suggests otherwise. Has the cat come back? Or did it never leave?

It was early autumn, 1968, and a teenaged Dave Anderson was booting along a gravel road in a light green Dodge half-ton pickup with his brother Richard. They were in the northwestern corner of the province, north of Kenora, on the way to a family trapline, when they saw something they supposedly must not have seen and would be foolhardy to admit to seeing.

“It looked like a white-tailed deer lying at the side of the road,” Dave Anderson recalls. “Then it got up, and I saw the tail.” No creature on this continent has an appendage quite like the luxuriant, ropy tail that distinguishes Puma concolor couguar from any other wild cat, never mind from a deer. Wildlife biologists have long maintained that cougars do not exist in eastern North America. The Anderson brothers had just joined a fairly exclusive club of eyewitnesses who have given anecdotal reports of the cats – a club generally thought of as a haven for the nearsighted, the naive and the delusional.

When Dave Anderson informed the local office of the Ministry of Natural Resources (MNR) of his encounter, he received, as he puts it, a “ha-ha” response. “There was a time that if you reported a cougar, it was like you reported a flying saucer,” he says. It was like saying Bigfoot stole your truck.

Ontario trappers like the Andersons, and others, had been reporting cougar sightings since at least the 1930s, and sightings had been reported sporadically in the province’s wilds west of Thunder Bay since the 1950s. Three years after the Andersons’ encounter, the eastern cougar – an animal whose very existence anywhere in Ontario had long been doubted – was formally proclaimed in 1971 (with almost endearing bureaucratic optimism) to be “endangered” in the province and protected under the Endangered Species Act.

The Act’s seeming acceptance that the cougar still existed somehow, somewhere in the province, heartened people who were sure they had seen one or were prepared to believe those who said they had. Dave Anderson remains a true believer, and MNR staff in the northwest corner of the province are no longer laughing at reports of cougar sightings. Cougar believers now have an inside man. Dave Anderson began working for MNR in 1975 and today is the district enforcement supervisor, based at Red Lake, 90 kilometres north of Kenora. Moreover, his family played a central role in at last securing proof that cougars still live in Ontario.

In March 1998, Ralph Anderson, another trapper brother of Dave’s, discovered enticing evidence at a line he operated northeast of Silver Lake, about 15 kilometres northeast of Kenora. Ralph had discovered fresh tracks in the snow, accompanied by “bop” marks made by an animal’s tail, which could not have been made by a lynx, the animal whose tracks are most readily confused with those of a cougar.

Ralph excitedly phoned his sister, Lil, a technician at MNR, who also runs a rehabilitation centre for raptors and owls in Kenora with her husband. She came out a few days later with Rob Moorley, a lands and waters technical specialist with MNR’s Kenora district. There were lynx tracks on the way to the site, and the imprints, with their fuzzy, “powder-puff ” edges made by tufts of fur around the paw, were easy to distinguish from the crisp, well-preserved prints at Ralph Anderson’s find. They also discovered fresh tracks, which appeared to be only hours old. They followed the imprints a distance, watching them dip into a creek and the edge of a lake, something a lynx would never do. Then they reached the evidentiary motherlode: a fresh – still soft, unfrozen – deposit of scat.

Lil Anderson scooped the poop into a baggie and sent a sample to Tom Packer, a forensic biologist at Alberta Fish and Wildlife in Edmonton. Photos of the tracks were forwarded to seven cat experts who happened to be in Canmore, Alberta, for the biennial meeting of the Western Forest Carnivore Committee.

Packer employed thin layer chromatography, a fairly simple and inexpensive chemical analysis, to find signature bile salts that can be used to distinguish between species. On November 9, Lil Anderson finally received her answer from Packer: “The bile salts contained in the scat are characteristic of cougar … and inconsistent with lynx.” Furthermore, Packer found that the track analysis, which provoked much debate at Canmore, also came down in favour of cougar. It was official. There were cougars in Ontario.

This strikingly handsome and powerful animal – the male cougar can exceed 100 kilos (more than 200 pounds) – is the most successful land predator of the western hemisphere, as well as its most successful mammal species. No other species has flourished in North, South and Central America. The historical range of the cougar spanned many ecosystems, from Canada’s boreal forests to the desert buttes of the southwestern United States to the pampas of Chile and Patagonia. A solitary animal, the cougar hunts mainly mid-size prey such as deer, antelope and sheep. Recent tracking studies in the western United States employing GPS transmitters have revealed that individual animals can wander hundreds of kilometres at a time in search of game.

But the cougar has paid dearly for its success, having been aggressively hunted wherever agriculture spread. By the 1930s, the cougar was believed eradicated from eastern North America; no one shot or trapped them anymore.

Over time, the big cat has accumulated many local names: cougar, puma, panther, painted lion (“painter”), mountain lion, catamount and the evocative “ghost cat,” to name a few. In the late 18th century, two different species names were given to the animals within that broad geographic population: Felis concolor and Puma concolor. (Concolor means “of a uniform colour,” even though the cougar is not.) By the early 20th century, the animal had accumulated 32 subspecies classifications in North, Central and South America – including the eastern cougar, the historic cat in Ontario, which, by then, wildlife biologists considered extinct. Not until the 1990s did wildlife biologists agree to remove the animal from the genus Felis, which contains “small” cats ranging from the domestic housecat to the ocelot, and settle on Puma concolor.

Scientists are still trying to agree on what a “cougar” even is. In 1999, Melanie Culver, now an assistant professor at the University of Arizona’s College of Agriculture and Life Sciences, caused a stir with her doctoral dissertation at the University of Maryland, which was expanded in 2000 into a landmark paper with three co-authors. Culver’s DNA analysis of 315 specimen samples indicated the existence of only one cougar subspecies for all of North America. Culver argued that the subspecies name for the eastern cougar, Puma concolor couguar, should apply to the entire population north of Nicaragua. She maintains that there is no such thing as a cougar, eastern or otherwise. The animal is a puma, as it is most commonly known in South America.

Whatever you wish to call the animal, evidence is growing that it is back in eastern North America – a remarkable change, given that when Culver did her DNA analysis, the only samples she could gather for the “eastern cougar” were from museum collections in the United States. Even today, Lil Anderson’s scat sample is the only confirmed physical evidence of a cougar in Ontario. In the United States, debate about the status of the cougar has become deeply politicized. It has embroiled state wildlife officials, nonprofit conservancies and amateur cryptozoologists in, at times, a nasty war of words.

In the eastern United States, people undeniably have been photographing cougars, finding them dead at the side of railway tracks (or hitting them with their cars) or shooting them. The elusive beast might never have left this side of the continent, having survived in remote areas in relic populations. Surviving populations in the west could also be moving east. But many of these examples have either proven to be, or are said by wildlife professionals to be, “exotic” in origin. That is to say, the animals are of captive breeding stock: escaped pets whose bloodlines (and evidentiary DNA) originate in South America.

Captive-bred cougars are at the heart of much of the controversy over the animal’s presence in eastern North America. Incontrovertible photographic evidence – and still none exists in Ontario – cannot prove that an animal is truly wild.

North America is positively teeming with captive “big” cats (lions and tigers) and “lesser” cats (cougars, panthers and the like) held in private collections and unregulated roadside zoos. Time and again, a South American genetic signature has indicated that a cougar is not of native stock. In May 1992, for example, a male cougar shot at Lake Abitibi in northern Quebec, 470 kilometres northwest of Ottawa, seemed to prove that a relic population had survived deep in the boreal forest of the Canadian Shield. But when a curator at the Canadian Museum of Nature in Ottawa learned of Culver’s groundbreaking DNA analysis and sent her a sliver of the preserved flesh of the Abitibi cougar in 2000, Chilean genetic markers turned up.

While no DNA analysis was conducted on Lil Anderson’s scat find at Silver Lake, the cougars encountered in northwestern Ontario, at least, are probably genuine wild stock. For one thing, researchers are aware of wild populations in neighbouring Manitoba and Minnesota.

“Around Red Lake, we get six to 10 sightings per year,” says Dave Anderson. “It seems as if, since the deer population started to move north in 1987, there’s been an increase in the number of sightings. Some of our sightings are iffy, and you don’t know if a person saw a lynx, but some people definitely saw a cougar, plain and simple. One lady, a local justice of the peace, walked right up to one before it ran off. When we get a sighting, we usually have four or five reports in a general area, and then they move on. There’s no doubt in my mind that they’re cougars, and that they’re wild cougars. We’re at the same latitude as where they’re spotting them in Manitoba.”

In the vicinity of Kenora and Red Lake, these cougars may represent a relic population or be animals expanding their territory from Manitoba or Minnesota. Whether the animals believed to have attacked people and horses in more populous southern Ontario are cougars as well, however, is an entirely different matter. Horse breeder Reta Regelink is convinced that a cougar killed her yearling buckskin filly in a pasture near Orillia in August 2005. The attack occurred about 25 kilometres northeast of Creemore, where the last known cougar in Ontario was supposed to have been shot dead in 1884.