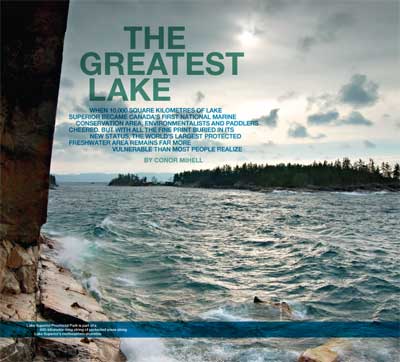 When the hot, late-afternoon sun beats down on Bowman Island in mid-July, Lake Superior feels like the Mediterranean. Warmth flows from a terra cotta shore of cobbles and rises from the lake. Beyond the storm line of driftwood, dwarf white birch and black spruce trees veiled in lichen string out across the carpet of deep green ground cover. I sink knee-deep into the lush sphagnum and fill my mouth with blueberries and know I’m in northern Ontario.

I launched my sea kayak at Silver Islet, a tiny community at the tip of the Sibley Peninsula, planning to spend a week paddling the 125 kilometres of northwestern Lake Superior coastline to Rossport, a village located 200 kilometres east of Thunder Bay. I reach Bowman Island, an Area of Natural and Scientific Interest (ANSI), on day four. Like other islands in the area, Bowman Island’s shoreline is a series of 50-centimetre-high terraces, created by the earth’s ponderous rebound in the wake of retreating ice sheets from the last ice age. Millennia of storms tossed and shifted apple-sized stones into distinct beach levels. Exploring farther inland, I discover that the step-like pattern continues beyond the treeline, hidden beneath the greenery of succession, forming the foundation of the entire 160-hectare island that began its rise from the lake some 10,000 years ago.

Protecting Our Liquid Assets
Lake Superior is the first protected area established under Canada’s National Marine Conservation Areas (NMCA) Act of 2002. All future marine protected areas managed by Parks Canada will be created under this act, and management plans of preexisting aquatic reserves, including Georgian Bay’s Fathom Five, will be modified to reflect its provisions.

Until the NMCA Act came into force, Parks Canada lacked a mechanism to create a network of marine protected areas to represent each of its 29 marine ecosystems. Julie Gelfand, president of Nature Canada, says the legislation was essential for habitat protection and the conservation of biological diversity. She hopes the creation of the Lake Superior NMCA will spur the government to respond to Nature Canada’s call for the establishment of another 13 marine protected areas by 2012.“Canada has the longest coastline in the world yet is a laggard in terms of protecting marine protected areas,” says Gelfand.

The NMCA Act is designed to safeguard aquatic ecosystems without forfeiting sustainable economic uses, says Doug Yurick, Parks Canada’s marine program chief. The act emphasizes the importance of maintaining biological diversity and prohibits the exploration for and exploitation of oil and gas, mineral and aggregate resources. Under the auspices of the Canadian Environmental Protection Act, it also forbids the dumping of waste products within NMCA boundaries.

Commercial shipping, pleasure boating and commercial and recreational fishing, however, will be allowed to continue within the Lake Superior reserve under the jurisdiction of Transport Canada and the Ontario Ministry of Natural Resources (MNR).

Jay Ritchlin, the David Suzuki Foundation’s director of marine conservation, says the effectiveness of the NMCA Act is compromised by its requirement that at least one zone – of indeterminate size – within each conservation area be set aside to accommodate economic and recreational uses.

“Conservation areas act as a safe refuge for species and protect ecosystem structure,” says Ritchlin. “Clearly, these areas should not be compromised by industrial or commercial use. The most effective reserves are those that are chosen on the basis of ecosystem sensitivity, are large in area and restrict all activity.”
Conor Mihell

Here, the vegetation is sparse, stunted and wind wizened – typical of the sort found in the subarctic or at alpine elevations due to the perennially chilly Lake Superior water, which creates a similarly cool microclimate.

After admiring knotted pearlwort – a wispy, but surprisingly hardy, herb normally found 1,600 kilometres to the north – I return to my campsite and pitch my tent on cobbles just beyond the lake’s grasp. As evening falls, I consider what the future holds for Bowman Island. This part of northwestern Lake Superior has been declared Canada’s first National Marine Conservation Area (NMCA), but because portions of the island are privately owned, it is not included within the protective embrace of the NMCA designation.

As much as the NMCA designation is cause for celebration, there is also some reason for concern. After years of lobbying various ministries to create the world’s largest freshwater protected area, the environmental community now wonders whether the federal government has gone far enough. Many important areas within the NMCA boundaries have been omitted from protection, including the untamed island on which I’ve pitched my tent. Some of these unprotected areas could become prime real estate for cottages; others could be logged for pulpwood, mined for uranium or quarried for aggregates. It turns out that even after being awarded NMCA status, the wilderness of northwestern Lake Superior remains vulnerable.

In October 2007, Prime Minister Steven Harper ended a decade of deliberations and political limbo by announcing an agreement to establish the Lake Superior NMCA. The diamond-shaped reserve sprawls across approximately 10,000 square kilometres of northwestern Lake Superior – an area nearly half the size of Georgian Bay – from the tip of the Sibley Peninsula at the mouth of Thunder Bay, to Bottle Point, east of the town of Terrace Bay. The southern boundary follows the Canada-U.S. border. Despite its distinction as the world’s largest freshwater marine conservation park, the NMCA protects barely 13 percent of Lake Superior’s 82,100-square-kilometre surface area.

This is the first such protected area to be established under the Canada National Marine Conservation Areas Act, which in 2002 enshrined the importance of protecting “self-regulating marine ecosystems … for the maintenance of biological diversity.” Doug Yurick, Parks Canada’s marine program chief, says that under this act, the flora, fauna and structure of northwestern Lake Superior – including the lake bed, water column and 60 square kilometres of islands and mainland coast – will be safeguarded indefinitely from the exploration for and exploitation of oil and gas, mineral and aggregate resources, as well as the dumping of waste products. Similar to a national park, the Lake Superior NMCA must have an interim management plan in place in the next five years, which will be reviewed every five years in Parliament.

Yurick says shipping, pleasure boating and commercial and recreational fishing – all of which are allowed by the act – will be overseen by existing agencies, such as the Ontario Ministry of Natural Resources (MNR) and Transport Canada. He says the overall objective of an NMCA is to “protect the structure and function of the ecosystem while allowing ecologically sustainable use to continue.” The act also requires zoning to accommodate the “ecologically sustainable use of marine resources.”

The island archipelago and open water of northwestern Lake Superior were identified as a potential federal marine park in 1997 for their 250-metre-high sedimentary cliffs, terraced beaches and approximately 25 species of unique plant life characteristic of arctic or alpine environments. According to MNR’s Natural Heritage Information Centre, the area provides habitat for about 70 species of rare or at-risk plants, including devil’s club, a thorny, metre-high plant that typically is found in the Rocky Mountains.

“At first you wonder why many of the plants on these islands aren’t in your guidebook,” says Gail Jackson, the Lake Superior NMCA’s first project manager and now Parks Canada’s NMCA program advisor. “Then you realize the biting cold water of Lake Superior has perpetuated communities of vegetation typical of the Far North.”

Species of note include cliff-nesting peregrine falcons and coaster brook trout, an anadromous fish that spends most of its life in Lake Superior and reproduces each autumn in a few tributaries with upwelling springs at specific temperatures. According to Rob Swainson, an MNR area biologist in the Nipigon district, coaster brook trout habitat has been altered so extensively by logging, mining and road development that Lake Superior’s only self-sustaining population exists in Nipigon Bay, part of the new NMCA. The reserve also protects Gapen’s Pool on the Nipigon River, which Swainson says is the most prolific spawning area for coaster brook trout in the entire Lake Superior basin. MNR research suggests that the area contains about a dozen species of fauna of rare or at-risk status, while 290 species of birds have been observed at the Thunder Cape Bird Observatory, located at the western terminus of the NMCA.