The Problem with Landfills 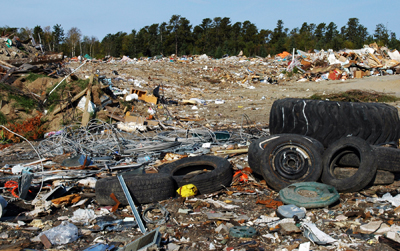 That the majority of Ontarians don’t have a clue where their garbage ends up after its left at the curb has as much to do with society’s general lack of environmental consciousness as it does the province’s lacklustre waste management regulations. Almost six million tonnes of Ontario waste ends up in 32 major landfills and four million tonnes is trucked to the United States. While policymakers bicker over ways to reduce our production of waste and costly dependence on stateside landfills, the Environmental Commissioner of Ontario, Gord Miller, is most concerned with the thousands of small, out-of-date dumps that receive a relatively small percentage of waste but impose significant environmental consequences.

When precipitation mixes with decomposing garbage it forms a contaminant cocktail known as leachate. The Ontario Ministry of the Environment (MOE) stipulates that new landfills have engineered liners designed to contain leachate—a regulation to which Miller indicates only 1 per cent of the province’s landfills conform. Leachate can freely seep into the surrounding soil in the rest of the primitive dumps that predate and are thus waived from modern regulations. This laces groundwater with excess organic nutrients, bacteria, viruses, metals and toxic compounds, which eventually infiltrates aquifers and flows into larger bodies of water.

What’s more, landfills also have significant impacts on air quality. Methane, the gas that’s released when garbage breaks down, is 21 times more potent than carbon dioxide, the baseline gas responsible for global warming. While the number of landfills across the country with the technology to capture methane is growing, Environment Canada reports that methane emanating from Canadian dumps accounts for about 3 per cent of our total greenhouse gas emissions.

In his 2010 annual report, Miller argues that the root of the problem in Ontario is the MOE’s laissez-faire approach to regulating and inspecting landfill sites. His research indicates that 700 Ontario dumps lack site-specific “certificate of approval” conditions to manage environmental impacts through mitigation strategies like buffer areas, surface water control and monitoring. Similarly, the Auditor General of Ontario noted in its 2010 report that operating requirements are often convoluted with obscure amendments that complicate inspections. These requirements are weak and irregularly enforced: The Auditor General reported that only 9 per cent of active and closed waste disposal sites in Ontario are inspected each year.

In dealing with Ontario’s long list of aging landfills, both Miller and the Auditor General came to the same conclusion: Patch them up with stringent, modern environmental regulations or shut them down. Ontario lags behind many North American jurisdictions where the operating requirements of landfills must be renewed every five years, the public is better engaged in the monitoring process, and site inspections impose and enforce binding deadlines when complaints are received. “Landfills can no longer be the province’s forgotten polluters,” writes Miller. “It is imperative that high-risk landfills are monitored and managed to protect Ontario’s water resources and air quality.”