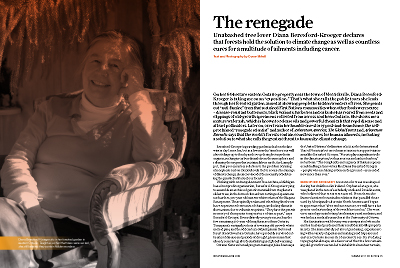 Unabashed tree lover Diana Beresford-Kroeger declares that forests hold the solution to climate change as well as countless cures for a multitude of ailments including cancer.

Text and Photography by Conor Mihell

On her 64-hectare eastern Ontario property near the town of Merrickville, Diana Beresford-Kroeger is taking me on an “exposition.” That’s what she calls the public tours she leads through her forested garden, aimed at showing people the hidden wonders of trees. She points out “anti-famine” trees that sustained First Nations communities when other foods were scarce – disease-resistant butternuts, black walnuts, hickories and oaks she has reared from seeds and clippings of old-growth specimens collected from across southern Ontario. She shows me a mature wafer ash, which is known to release oils and powerful chemicals that repel disease and attract pollinators. Later on, over tea in her humble one-storey post-and-beam home, the self-proclaimed “renegade scientist” and author of Arboretum America, The Global Forest and Arboretum Borealis says that the world’s forests contain countless cures for human ailments, including a solution to what she calls the greatest threat to humanity: climate change.

Beresford-Kroeger’s sprawling garden is drab on the late winter day I meet her, but in a few months’ time her trees will shoot foliage up to the sky and rev up their photosynthetic engines, sucking in carbon dioxide from the atmosphere and releasing the oxygen that sustains life on earth. And, simply put, this process is her solution to the problem of rising atmospheric carbon dioxide levels. But to reverse the damage of climate change, she is convinced of the necessity of bolstering the genetic fortitude of our forests.

Working with Archangel Ancient Tree Archive, a Michigan-based nonprofit organization, Beresford-Kroeger is trying to assemble an archive of genetic material from the planet’s oldest trees, in the form of clones from cuttings of specimens such as the 1,300-year-old eastern white cedars of the Niagara Escarpment. Those spindly cedars and other long-lived trees have experienced centuries of change, including climatic fluctuations due to volcanic eruptions. “They have the genetic memory of changes in temperature of times past,” says Beresford-Kroeger. Even relatively young trees, such as the few remaining 300-year-old maples in southern Ontario, Temagami’s vestigial pockets of towering old-growth white and red pine, and the odd century-old jack pine in the boreal forest of northwestern Ontario, have probably survived outbreaks of disease and periods of drought, phenomena that already seem integral to the initial stages of global warming.

Ontario Nature’s boreal program manager Julee Boan says the United Nations’ declaration of 2011 as the International Year of Forests is but one of many reasons to support visionaries like Beresford-Kroeger. “Forests play a significant role in the climate system, both as sources and sinks of carbon,” notes Boan. “The complexity and urgency of this issue poses a real challenge. Innovators like Diana Beresford-Kroeger – people who are taking action on the ground – are needed now more than ever.”

Beresford-Kroeger’s reverence for trees was shaped during her childhood in Ireland. Orphaned at age 11, she was placed in the care of a scholarly uncle and Druidic aunts, who believed that trees were sacred. From them she learned ancient botanical medicines that parallel those used by Aboriginal cultures in North America and began to appreciate that “if we embrace nature, we will have a far greater understanding of the world around us.” She went on to earn degrees in botany, biochemistry and medicine, and worked as a medical researcher at the University of Ottawa.

Her fascination with botany was reinvigorated when she and her husband purchased their rural Merrickville property in 1973. She immediately set about gardening, experimenting with a variety of species and making road trips around eastern Ontario in search of ancient trees. By studying topographical maps, she discovered that the few remaining old-growth trees tended to inhabit the harshest terrain, which loggers generally avoided. The early settlers in the area learned from Aboriginal communities the benefits of planting nut trees in their orchards – primarily as an important source of protein and fat, but also for the environmental benefits of what is now termed biological diversity. By the time Beresford-Kroeger arrived, however, this practice had been abandoned, and most of the butternut, hickory and chestnut trees in the region “were on their last legs” due to deforestation and disease.

She selected many of the trees for her garden according to their ecological, medicinal and social benefits – a system she calls a bioplan. This involves planting specific trees for the “ecofunctions” they contribute to the greater ecological community and thinking beyond simply their timber values. For instance, she has demonstrated on her property how farmers can add a valuable nut crop to their mix by taking a cue from the pioneers and incorporating black walnut into rows of crops. Such “two-tier” systems reap the benefits of trees’ ability to “recharge the water table, promote beneficial predation, attract pollinators and increase and diversify wildlife habitat,” she says. If she had riparian areas on her property, she would plant them with black willow and red-osier dogwood, trees whose root structures draw pollutants from the soil like magnets, thereby improving water quality.

The notion of using old-growth genetics to produce resilient forests is an extension of the bioplan concept. In studying the specimens in her garden and reviewing the work of researchers, Beresford-Kroeger came to believe that old-growth trees have developed complex biochemistries that allow them to communicate and coordinate responses to environmental changes related to climate and disease. They do this through symbiotic root fungi and by emitting chemical cues known as aerosols. While centuries-old trees share the same DNA as current generations, older trees may have developed more refined epigenetics – “tags” on the genetic code that effectively chronicle a tree’s life experience and can be passed along to successive generations, says Beresford-Kroeger.

The scientist, who is in her sixties, considers herself a renegade because she tends to think in general, holistic terms rather than focusing on details. Some biologists, including legendary Harvard University researcher E.O. Wilson, have lauded her approach. “Her ideas are a rare, if not entirely new, approach to natural history,” wrote Wilson in the forward to Arboretum America. “The science of selecting trees for different uses around the world has not been well studied.” In addition, Beresford-Kroeger is a lyrical storyteller and engaging public speaker. But she has also been criticized for spreading untested botanical theories and embellishing her ideas with anthropomorphism.

Nevertheless, Ontario Ministry of Natural Resources forester Barb Boysen says the notion of propagating old-growth stock to hedge our bets against climate change has value. Although we know very little about tree genetics, older trees, by definition, are “proven performers,” says Boysen, who coordinates the Forest Gene Conservation Association (FGCA), a Peterborough-based nonprofit that aims to protect and enhance the genetic diversity of southern Ontario woodlots. Since 1994, the FGCA has delivered a message that parallels Beresford-Kroeger’s campaign, advising private landowners on the importance of choosing genetically robust, geographically appropriate species of trees.

The FGCA deals with some 160,000 woodlot owners, whose average length of tenure on their land is a paltry 20 years. This goes against the grain of the kind of long-term planning that is essential to developing and maintaining healthy forests. “Tree planting is not a natural process,” explains Boysen. “In doing so, we are essentially trying to put 30 to 50 years of natural succession processes into a few years.” Thinking short-term and failing to consider the critical role of good seeds and proper genetics can thwart efforts to create self-perpetuating forests. “The much larger horticultural landscape industry is famous for not knowing or caring where their trees come from,” she adds. “This may be just one of many reasons why the average life of a city tree is less than 20 years.”

The issue gains urgency in light of International Year of Forests initiatives like that of Trees Ontario, a nonprofit partnership, whose 2011 goal is to plant three million trees in southern Ontario, and Environmental Commissioner of Ontario Gord Miller’s 2010 call for one billion more trees to be planted in the southern half of the province. Genetic diversity should be part of the mandate of these initiatives, argues Boysen. “For example, if we only had 50 old oaks left scattered across southern Ontario, I would not want them to be the sole trees we collect [seeds] from,” she says. Rather, it is the mix of older and younger trees, with a wide range of genes, that forms the basis of a resilient forest, promoting genetic mixing – the opposite of inbreeding – a critical factor in the evolution of climate-hardy trees, says Beresford-Kroeger.

Boysen and Beresford-Kroeger both argue that proper forest cultivation, public education and widespread, carefully planned tree-planting campaigns will be necessary to combat climate change. “We’re at the point of climate change where there’s no return,” insists Beresford-Kroeger. “It is a phenomenon that’s causing people to change the way they think. If someone plants a tree, then they’ll also do something else. Getting involved empowers people to think positively.”

Frequent ON Nature contributor Conor Mihell was the winner of a 2010 Northern Lights Award for travel writing excellence.