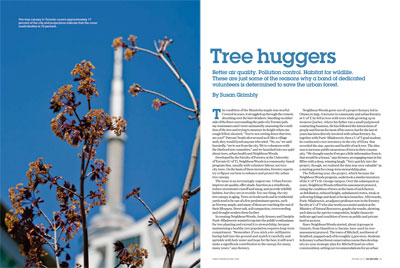 Better air quality. Pollution control. Habitat for wildlife. These are just some of the reasons why a band of dedicated volunteers is determined to save the urban forest. 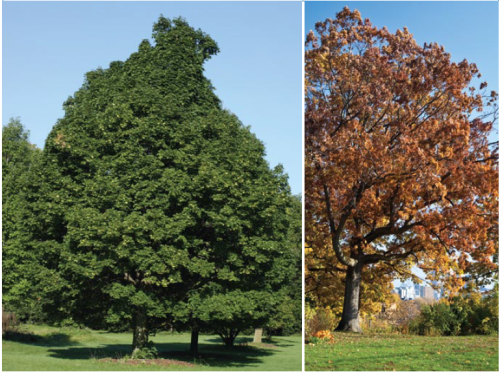 The condition of the Manitoba maple was woeful. Covered in scars, it struggled up through the cement, slouching over the beer drinkers. Standing on either side of the fence surrounding the patio of a Toronto pub, my teammates and I were animatedly assessing the condition of the tree and trying to measure its height when one rough fellow shouted, “You’re not cutting down that tree, are you?” Patrons’ heads shot around as if, like a village mob, they would lynch anyone who tried. “No, no,” we said hurriedly, “we’re not from the city. We’re volunteers with the Harbord tree committee,” and we launched into our spiel about trees, urban health and NeighbourWoods.

Developed by the Faculty of Forestry at the University of Toronto (U of T), NeighbourWoods is a community-based program that, usually with volunteer labour, surveys city trees. On the basis of these inventories, forestry experts try to figure out how to enhance and protect the urban tree canopy.

The issue is an increasingly urgent one. Urban forests improve air quality, offer shade, function as a windbreak, reduce stormwater runoff and smog, and provide wildlife habitat, but they are in trouble. For one thing, the city tree canopy is aging. Trees on boulevards and in residential yards tend to be one of a few predominant species, such as Norway maple, and many of them are reaching the end of their lifespans. Street salt, soil compaction, overcrowding and drought weaken them further.

In creating NeighbourWoods, Andy Kenney and Danijela Puric-Mladenovic wanted to tap into the public’s enthusiasm for tree planting and extend it to stewardship, because maintaining a healthy tree population requires long-term commitment. “Remember, if you stick a 60-millimetre burlap ball into the ground and mulch it carefully and sprinkle with holy water and hope for the best, it still won’t make a significant contribution to the canopy for many, many years,” says Kenney.

NeighbourWoods grew out of a project Kenney led in Ottawa in 1995. A lecturer in community and urban forestry at U of T, he fell in love with trees while growing up in western Quebec, where his father ran a small pulpwoodcontracting business. He has followed the interactions of people and forests for most of his career, but for the last 16 years has been directly involved with urban forestry. So, together with Puric-Mladenovic, then a U of T grad student, he conducted a tree inventory in the city of Elora that recorded the size, species and health of each tree. The idea was to increase public awareness of trees in their community. “We thought maybe if we got a little information from it, that would be a bonus,” says Kenney, an engaging man in his fifties with a deep, winning laugh. “Very quickly into the project, though, we realized the data was very valuable” as a starting point for a long-term stewardship plan.

The following year, the project, which became the NeighbourWoods program, undertook a similar inventory of the U of T’s St. George campus. Over the subsequent 14 years, NeighbourWoods refined its assessment protocol, rating the condition of trees on the basis of such factors as defoliation, reduced height, unbalanced crown, weak or yellowing foliage and dead or broken branches.  Afterwards, Puric-Mladenovic, an adjunct professor now in the forestry faculty at U of T who also works as a senior analyst at the Ministry of Natural Resources, graphs the results, showing such data as the species composition, height classes (to indicate age) and condition of trees on public and private land in an area.

Think native, think locally sourced and, if you have the space, think big. Why big? “We need big trees in the urban environment, because they provide exponentially more benefits than small trees,” says forestry expert Dr. Andy Kenney of the University of Toronto. “It’s not just a matter of the number of trees or even really a matter of canopy cover. It’s the volume of the canopy that’s critical.”

Not every yard has space for a majestic white oak, however. And the best tree choices may vary from one town to another and from one side of town to another, depending on soil texture, moisture, sun exposure and other factors. Start by consulting a good arborist. To slow the advance of invasive species such as Siberian elm, Norway maple and Chinese sumac (tree-of-heaven or, more informally, stink-tree), tree organizations recommend that southern Ontario communities opt, for example, for such indigenous species as bur, red or white oak; black, red or silver maple; basswood; hackberry; or choke cherry. Check out the Ministry of Natural Resources tree atlas webpage on their website www.mnr.gov.on.ca, which provides a link to “What trees grow best where you live?” Also keep diversity in mind. “Look around your neighbourhood to see what everyone else is planting – and then plant something else,” advises Kenney.

Many municipalities in Ontario have street tree-planting programs. Toronto, for instance, offers 34 species of trees for residents’ front yards. The program is free; plantings are done in spring and fall. Contact Toronto’s Urban Forestry Services at 416-338-TREE or www.toronto.ca/trees. Hamilton has a similar program that, according to the city’s website, “allows for the installation of new trees and replacement trees on the city-owned portion of a property.” The city offers 38 species free to residents, including black gum, blue beech and shellbark hickory. The annual deadline for requests is June 15. Contact Hamilton’s Street Tree Planting Program at 905-546-2489 or www.hamilton.ca/treeplanting.

Keep in mind that both cities offer trees that are not native. The organization Local Enhancement & Appreciation of Forests (LEAF) has a subsidized backyard tree-planting program available to residents of Toronto, Vaughan, Markham and Richmond Hill. Certified arborists help residents decide on the type of tree that suits their property and where to plant it. LEAF offers 28 native trees (in addition to native shrubs). The cost ranges from $80 to $200 a tree. Contact LEAF at 416-413-9244 or www.leaftoronto.org.

Since NeighbourWoods started, about 12 groups in Ontario, from Hamilton to Sarnia, have used its tree-assessment protocol. The town of Mitchell, northwest of Stratford, mapped each of its roughly 13,500 trees. Students in Kenney’s urban forest conservation course then developed a 20-year strategic plan for Mitchell (and six other communities), setting out recommendations for an urban forest stewardship based on the tree inventory. Then came the tough part: persuading the residents to put the recommendations into action.