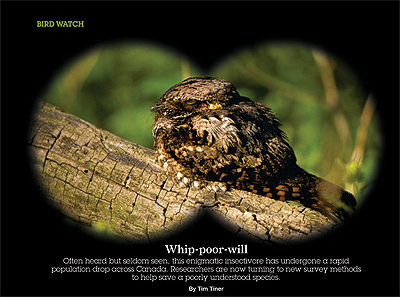 Often heard but seldom seen, this enigmatic insectivore has undergone a rapid population drop across Canada. Researchers are now turning to new survey methods to help save a poorly understood species.

The whip-poor-will’s loud, ringing call – a fabled, disembodied “voice in the night woods” (in the words of naturalist Roger Tory Peterson) – is, unfortunately, receding into memory across much of Ontario. The plight of this nocturnal spectre, rarely seen even in the days when it was commonly heard, is finally garnering attention, but researchers face a formidable challenge in reversing the species’ decline.

Evocatively named for its rapidly repeated, three-syllable song, the whip-poor-will inhabits dry, patchy, semi-open forests, often of scattered pine, oak and juniper. The birds seldom stir during the day, and their darkly mottled, greybrown plumage blends so well with the needle and leaf litter or branches on which they perch that they are nearly invisible. They take wing only at dawn and dusk – starting about half an hour after sunset – or in bright moonlight. Unlike their high-flying nighthawk relatives, whip-poor-wills forage like flycatchers, darting from favourite perches over clearings to snatch large moths, beetles and other airborne insects. Humans so seldom witness these twilight sorties that the echoing calls of the male whip-poor-will, sometimes belted out dozens or even hundreds of times in succession, were once ascribed to nighthawks.

Since the mid-1900s, however, the cries of these vociferous insectivores have become increasingly rare throughout much of their range in eastern North America. The North American Breeding Bird Survey notes that in Canada, where whip-poor-wills nest from Nova Scotia to Saskatchewan, the population of this species declined by 75 percent between 1968 and 2007. Over the past decade, researchers compiling the Atlas of Breeding Birds of Ontario recorded this bird in fewer than half the areas in which it had been found when the previous atlas was compiled 25 years ago.

Although once found as far north as Sudbury, the robin-sized, tiny-beaked birds are now concentrated mainly along the southern edge of the Canadian Shield, Georgian Bay’s rocky shores and the Bruce Peninsula, in eastern Ontario’s Rideau Lakes area and on the Oak Ridges Moraine. Farther south, these birds are holding out largely in protected havens at Long Point, Rondeau and The Pinery, and at the St. Williams Conservation Reserve in Norfolk County. Conservation biologists estimate the Ontario population at about 30,000 birds.

In April 2009, the Committee on the Status of Endangered Wildlife in Canada recommended that the whip-poor-will be designated federally as a threatened species. While Ottawa’s decision is still pending, the Ontario government listed the bird as threatened last September. The provincial Endangered Species Act (ESA) requires that a government-steered team design a recovery strategy by September 2011. That is a tall order, given how little is known about this enigmatic bird and the reasons for its increasing rarity, says Glenn Desy, a species-at-risk biologist with Ontario’s Ministry of Natural Resources (MNR). “The whip-poor-will has gone from having no [risk] status in September 2009 to being threatened, so it’s a pretty fast transition,” says Desy, who is charged with investigating the bird’s habitat requirements, which must be protected under the ESA.

Desy’s task is complicated by the bird’s distinctive ecology. For instance, MNR usually focuses on identifying nest sites to define a species’ habitat needs, but the whip-poor-will does not make a nest, instead laying its eggs directly on the ground, and very few of the speckled, camouflaged clutches are ever found.

Habitat loss and degradation is suspected to be the biggest factor driving the whip-poor-will’s decline. In southern Ontario, intensification of farming has reduced pasture and hedgerows. Farther north, maturing forests and fire suppression efforts seem to be eliminating the scrubby terrain the birds favour.

New survey methods recently developed by the National Audubon Society in the United States, however, offer some hope of gaining a better understanding of the species and its needs. Once a year, volunteers in about 25 states make stops every mile along nine-mile roadside routes to listen for six minutes and record every whip-poor-will they hear. The surveys are conducted at the peak of the breeding season, on clear nights when the moon is up, within a week before or after the full moon in late May or June. In the 1980s, research by Ontario ornithologist Alex Mills determined that whip-poor-wills usually lay their eggs during the peak of this lunar cycle so that they will hatch about 10 days before the following full moon. This maximizes the number of moonlight hours the birds have to forage for food for their new nestlings.

Last spring, Birds Studies Canada tested the U.S.-designed survey method on 10 routes along concession roads through the Norfolk Forest Complex Important Bird Area, northwest of Long Point. The effort found some solo birds, as well as a couple of clusters of whip-poor-wills. At one site, 11 birds were calling. The organization’s Ontario programs manager, Debbie Badzinski, hopes to expand the surveys this year to about 50 routes now covered by the Ontario Nocturnal Owl Survey in central Ontario, provided that MNR kicks in funding. “We need to identify which regions support the largest concentrations in order to direct conservation efforts,” she says.

Clutch: 2 eggs (second clutches are common in the United States and known in Ontario)

Scientists hope that this new information will be used to inform forest management measures to help maintain or create whip-poor-will habitat, says Desy. Controlled burns are already being used in New Hampshire, Wisconsin and Pennsylvania to restore habitats for various species, including whip-poor-wills.

Factors beyond habitat loss may also be playing a role in the decline of this species. Reduced insect prey, due to both use of pesticides and shifts in hatching times caused by climate change, could be contributing to the bird’s dwindling numbers, say researchers, as could encroaching development and the increasing number of vehicles on roads. The problem could also originate in the whip-poor-will’s wintering grounds, which stretch from the Gulf states to Honduras, says Pamela Hunt, a conservation biologist with New Hampshire Audubon who initiated whip-poor-will surveys in the United States in 2003. “We don’t really know much about what these birds do there,” she notes.

The challenge of getting to the heart of the whip-poor-will’s decline is mind-boggling, says Hunt. Coming up with a solution to stabilize the population will be just as challenging. “We don’t know [the solution] yet, so we’re sort of circling the wagons to find out.”

Tim Tiner is a long-time contributor to ON Nature and coauthor of the revised and expanded nature guide, The Complete Up North, published this spring.