Why fear the bear? 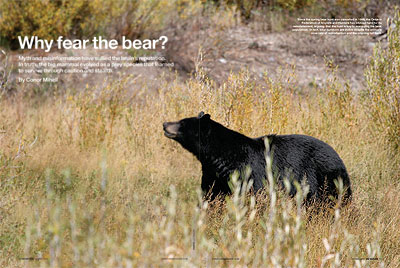 Myth and misinformation have sullied the bruin’s reputation.  In truth, the big mammal evolved as a prey species that learned to survive through caution and stealth. 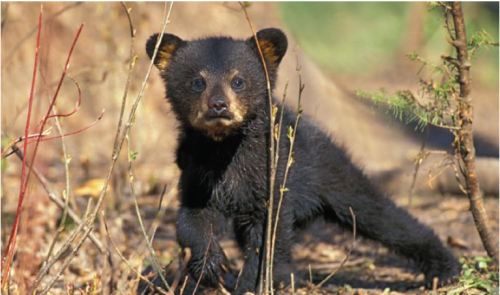 Jim Johnston’s efforts to redeem the reputation of black bears began with a close encounter in 1982 that left him stunned. The president of the Friends of Algoma East (a member group of Ontario Nature), based in the northern Ontario town of Elliot Lake, was napping at his campsite while on a moose hunting trip north of Sault Ste. Marie when he was startled by a shove. “I opened my eyes and there was a bear,” he recalls. At the time, Johnston was an avid hunter but had never hunted Ursus americanus. “I believed in a lot of the myths and misinformation, the stuff you learn from hunting magazines,” he says. “I thought that encounters equalled attack. I bought into the attitude of hysteria and fear. And I just couldn’t believe it when that bear didn’t eat me.”

That encounter changed Johnston’s attitude. He went from fearing bears to educating the public about their behaviour and ecology in hopes of ending the persecution of this species that has been going on since European settlers arrived in North America. Since Ontario cancelled its spring bear hunt in 1999, Johnston’s former colleagues at the Ontario Federation of Anglers and Hunters (OFAH) have lobbied hard for its reinstatement, arguing that early-season hunting is a “vital bear management tool.” In a 2008 press release, OFAH president Jack Hedman claimed that the ban on bear hunting was causing Ontario’s black bear population to spike out of control, endangering “the welfare of our children, the safety of our workers in the bush and people simply enjoying their camp or backyard.” Newspapers such as The Sault Star reinforce the fears with sensationalist accounts of “bold” black bears that have “multiplied over the years” and are “too big for other animals to cull.”

Johnston is eager to set the record straight. The fact is that the roughly 6,200 bears killed by hunters in Ontario in 2007 (the most recent statistic available) is only 9 percent fewer than the average number taken in the decade leading up to the cancellation of the spring hunt. Research also shows that Ontario’s black bear population is stable at around 100,000 animals. The species has the second-lowest reproduction rate of any mammal in North America, so OFAH’s claim that Ontario’s bear population has increased by at least 30 percent in the past 10 years is remarkably inaccurate. Furthermore, statistics show that black bears are rarely aggressive toward humans: only 61 black bear-related fatalities have occurred across the continent since 1900; humans are about 250 times more likely to be killed by lightning than by a bear.

Humans have much less to fear from bears than bears do from us. Development increasingly shrinks black bear habitat, which historically covered most of the province, including all of southern Ontario. “We need to recognize that we’re the problem,” says Ainslie Willock, the president and director of outreach of the Get Bear Smart Society, a nongovernmental organization, based in Whistler, B.C., that created Canada’s first program to reduce conflict between humans and black bears in an urban area. “If we’re going to be petrified of them, then there’s no future for black bears,” warns Willock. “The reality is, they’re quite easy to live with once you understand them.”

At the end of a 90-minute telephone interview, Dr. Lynn Rogers, an international authority on black bear behaviour and ecology, says he has told me all that he has learned about black bears in 43 years of research. The affable 70-year-old is the founder of the North American Bear Center, an educational facility in Ely, Minn. Proof that Rogers is not exaggerating when he says that he is still just “scratching the surface” in understanding his subject is that I catch up with him while he is driving across the state to deliver a deceased female for the first-ever autopsy of a black bear that has died of old age. The procedure on the 30-plus-year-old bear at the University of Minnesota will give Rogers his first opportunity to study a mature bear that died of natural causes. “Almost every [black bear] death is human caused,” explains Sue Mansfield, Rogers’s research assistant. “Bears are killed by automobiles and legally and illegally by hunters.” The average age of bears taken in the state’s fall hunt is just two for males and three for females. “These bears aren’t even having the chance to reproduce,” says Mansfield. By analyzing the aged bear’s heart, muscles and joints, Rogers and Mansfield hope to learn more about the physiology of older bears.

The pair’s research focuses on Minnesota’s Superior National Forest, a 16,000-square-kilometre stretch of wilderness and rural land south of northwestern Ontario’s Quetico Provincial Park. The habitat, climate and geography of the area are similar to those of central Ontario, making it a good analogy for the circumstances in which Ontario bears live. Rogers, who is often called the “Jane Goodall of black bears,” has gleaned most of his findings by “walking with the bears” – observing at close range and documenting, over 24-hour periods, their social and environmental interactions and dietary preferences. Each summer, he offers popular workshops during which ordinary citizens can learn more about black bear behaviour through first-hand experience, including attaching radio collars to nontranquillized bears and interacting closely with mothers and cubs. “One of the biggest myths is that mother black bears are dangerous,” says Rogers. “But nobody’s ever been killed by a mother bear defending her cubs.” He often crawls inside dens to inspect bear cubs – and has always emerged unharmed. Out of the den, juvenile black bears are able to escape danger by climbing trees, Rogers explains.