Why we can’t save this forest 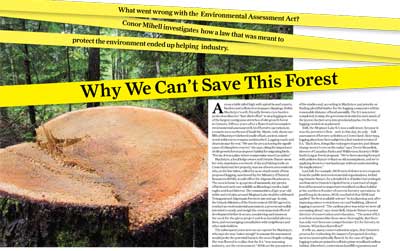 What went wrong with the Environmental Assessment Act? Conor Mihell investigates how a law that was meant to protect the environment ended up helping industry.

Across a table piled high with spiral-bound reports, binders and yellowed newspaper clippings, Robin MacIntyre’s soft, friendly brown eyes harden as she describes her “last-ditch effort” to stop logging in one of the largest contiguous stretches of old-growth forest in Ontario. Fifteen years after a flawed and incomplete environmental assessment (EA) of forestry operations in a remote area northeast of Sault Ste. Marie, only about one-fifth of MacIntyre’s beloved cradle of lush, ancient, mixed-wood wilderness remains undisturbed. Logging roads and clearcuts mar the rest. “We saw the area as having the significance of a biosphere reserve,” she says, citing the importance of old-growth forest as stopover habitat for migrating birds. “For me, it was a place where compromise wasn’t an option.”

Pre-approvals: Originally, the Environmental Assessment Act prohibited the proponent of a project from purchasing property, securing funding or seeking other government approvals before an assessment took place. This changed in 1996, as the government tried to expedite the EA process. The net effect has been to discourage negative reviews of proposed developments, says Justin Duncan, a staff lawyer with Ecojustice. “The more pieces of the puzzle the proponent has in place, the harder it is to even consider the notion of saying no.”

Minimal monitoring: According to Richard Kuhn, a professor of geography at the University of Guelph, EA’s greatest weakness is its inability to “learn” and evolve because the authorities fail to monitor the eventual outcomes of assessed projects. “If there’s one thing we know about forecasting, it’s that it’s usually wrong,” says Kuhn. “Environmental assessment legislation is not at all rigorous in looking at whether the conditions [of the assessment] were met five or 10 years after the project is finished. Rather than trying to do better forecasting, it’d be better to look at what happened after the fact, to inform future decisions.”

Policies and programs need not apply: Environmental groups were shocked when Premier Dalton McGuinty exempted the Ontario Power Authority’s 2006 Integrated Power System Plan (IPSP) from EA. The IPSP charted the Province’s future electricity course and outlined $60 billion in infrastructure spending – the biggest development proposal in Ontario’s history. “If anything requires a long, hard and open public review, it’s this,” says Rick Lindgren, a lawyer with the Canadian Environmental Law Association. “We can’t confine EA procedures to discrete, site-specific projects. It’s supposed to apply to the government policies and programs that drive these projects.”

MacIntyre, a local lodge owner and Ontario Nature member who maintains a network of ski and hiking trails on Crown land near her property, was one of seven area residents who, in the late 1980s, called for an in-depth study of how proposed logging, sanctioned by the Ministry of Natural Resources (MNR), would affect the Algoma Headwaters. The area is home to 43 species of mammals, 197 species of birds and such rare wildlife as Blanding’s turtles, bald eagles and least bitterns. The communities of 350-year-old white and red pine around Megisan Lake rival the celebrated Temagami and Algonquin forests in size and age. In 1991, the Ontario Ministry of the Environment (MOE) agreed to conduct an environmental assessment, a process ostensibly intended to study and weigh the environmental effect of development before it occurs, considering such issues as the need for the given project and less harmful alternatives, and encouraging consultation with neighbours and other stakeholders.

The subsequent years were an eye-opener for MacIntyre, who says she was “naive enough” to assume the assessment would probe the potential harm to the area’s fragile ecology. She was floored to realize that the EA “was assessing industry, not the environment.” MNR set the parameters of the studies and, according to MacIntyre, put priority on finding plentiful timber for the logging companies within reasonable distance of local sawmills. The EA was never completed; in 1999, the government decided to turn much of the 50,000-hectare area into provincial parks. On the rest, logging carried on as planned.

Still, the Megisan Lake EA was a milestone, because it was the province’s first – and, to this day, its only – full assessment of forestry activities on Crown land. Since 1994, logging plans have been subject to a fast-tracked version of EA. “Back then, things like endangered species and climate change weren’t even on the radar,” says Trevor Hesselink, director of Canadian Parks and Wilderness Society’s Wildlands League forest program. “We’ve been moving forward with policies that are reliant on old assumptions, and we’re applying them to a vast landscape without understanding the implications.”

Last fall, for example, MOE turned down seven requests from the public and environmental organizations, including Ontario Nature, for a detailed EA of timber harvesting in northwestern Ontario’s Ogoki Forest, a vast tract of virgin boreal forest and an important woodland caribou habitat at the northern frontier of current forestry operations. In justifying its decision, MOE concluded that MNR had applied “the best available science” in its planning and, after imposing minor restrictions on road building, allowed logging to proceed. “The caribou piece was what we were all screaming about,” says Anne Bell, Ontario Nature’s senior director of conservation and education. “The point of EA is to look at issues like these more thoroughly. But there has only ever been one comprehensive EA for forestry in Ontario. What does that tell us?”