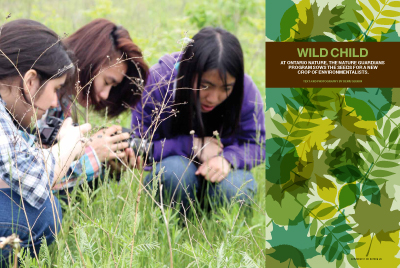 At Ontario Nature, the Nature Guardians program sows the seeds for a new crop of environmentalists.

Text and Photography by Denis Seguin

On a chilly spring morning, it takes a lot of imagination to picture a forest along this eastern fringe of the Greater Toronto Area. Acres of damp farmland stretch west and south, stubbled with stalks and desiccated cobs of cattle corn left from the passage of last autumn’s combine harvesters. Clods of earth poke out of puddles, and low areas are nothing but muddy swamp after a very wet April. But this field is a special space. Named for the late environmentalist, the Bob Hunter Memorial Park is a 200-hectare swath of what will become – with the help of a new generation of conservation activists – Canada’s next national park.

Jim Robb, general manager of the Friends of the Rouge Watershed, stands on a rise as he explains the 35-year journey to this point, from the near-miss that would have put this field on a flight path to a major airport in Pickering, to a massive habitat restoration and amelioration project that balances wilderness and sustainable local farming. “Every year we bring out about 4,000 people to plant 60,000 native trees, shrubs and wildflowers,” he says. “Ten years ago, there were only three sycamore trees left in the Rouge. Now, there are probably 3,000.” Then he turns to watch this year’s crop of Nature Guardians – none of them born before 1990 – tromp toward him across the field.

Launched in 2009 with a three-year grant from the Ontario Trillium Foundation, the Nature Guardians program connects kids with their wild side and with nature preservation activities. Part of that program is the vibrant Youth Council, which consists of 22 energetic and outgoing teens from across the province who organize volunteering opportunities in their communities; people like Stephanie Glanzmann – a well-spoken 16-year-old who is not sure yet what career she will choose but knows she wants to make a difference in the world.

Glanzmann has chosen to focus on the Rouge watershed, which has been a special space for her and her family – enthusiastic hikers all – for as long as she can remember “It’s one of the few big parks accessible to Toronto. I’ve always been going out here, and so has my family. So this is giving back.”

Not a moment too soon. There is a great need for the enthusiasm of people like Glanzmann. “Ontario’s naturalist community is greying and membership in nature clubs is in decline,” says Sarah Hedges, the Nature Guardians coordinator. “The clubs are worried for their future.” For some time, Ontario Nature has had a general outreach program – essentially an adult version of the Nature Guardians. But Hedges, who at 22 could be a Nature Guardian herself, says, “We decided to refocus our efforts on youth.” How young? Very. The program is aimed at kids five to 18, although university- aged students are also welcome.

The seed for the Youth Council was planted at a youth summit for biodiversity held in June 2010. Sixty-five high school-aged Nature Guardians from across the province attended a weekend filled with workshops on a range of topics (“Slime and Scales”), seminars (“Boreal in Jeopardy”) and inspirational speeches (astronaut Roberta Bondar delivered the keynote address) guaranteed to stoke environmental fervour. The challenge was not so much to find the next generation of Jim Robbs, but to help young people find the Jim Robb within them. At the end, the conveners put a question to the group: Who among you would be interested in pursuing this process year-round? Thirty keeners raised their hands.

In November 2010, a core group of 22 gathered at the Toronto Zoo, one of Ontario Nature’s partner organizations, for a leadership weekend. This colloquium was made of sterner stuff than the youth summit: the attendees heard about how to fundraise for their activities and organize a conservation event with volunteers. Worthy causes abound, but somebody has to order a bus, procure the tools, pack the snacks and get the people out.

Since then, hundreds of children, youth and their families have participated in Nature Guardians events. Whether those events involve “engaging with your environment” or “walking in the woods,” they benefit the kids as much as they do nature. The hard truth is that most Canadians, especially children, do not get outside enough. (A British research team found that youngsters are more likely to identify with Pokemon characters than with local wildlife.) What’s more, group activity develops people skills, and interacting with nature challenges the individual to think beyond the self. “Connecting with nature is key to a child’s healthy development and to their physical, mental, social and spiritual well-being,” explains Anne Bell, Ontario Nature’s director of conservation and education. Intimate contact with nature, she says, gives kids “moments that are filled with colours, sounds, smells, shapes, emotion, surprise, awe, wonder.”

At Bob Hunter Memorial Park on this last day of Earth Month 2011, around 40 people, mostly teenagers, are awaiting their moment of nature intimacy as they gather around Jim Robb’s mud-splattered pickup truck. Surprisingly, most of them are recent immigrants to Canada, many of whom speak only basic English. “Newcomers to Canada,” says Robb later, “are the future of this country, the future protectors and managers of the park. We want them to fall in love with the place, invest a little sweat and energy, get their hands dirty and understand a little more about nature.” After Robb explains the morning’s plan and demonstrates the proper method for planting a tree, groups of shovel-wielding kids start to dig enthusiastically. “When you plant a tree, it’s a spiritual thing,” observes Robb. “Every major faith uses tree-planting as a symbol or a rite.”

Conservation groups like Robb’s always need young volunteers, and one place that has them is the YMCA. Its Newcomer Youth Leadership Development Program encourages young immigrants to engage in their adopted community, while getting the 40-hour community service credit required for graduation from high school. Newcomer youth advisors Ashley Korn and Hanna Caplan are at the Rouge planting right along with their program participants. “We’re always looking for volunteer opportunities, and Ontario Nature has been setting stuff up,” says Korn.

Asked how long it will be before these slender stalks are worthy of the term “tree,” Robb points to a stand to the north. “We planted those pines in 2008. They’re already eight to nine feet. The trees I planted 20 years ago are now 30 to 40 feet tall. It’s a forest.” Then he points south and east, beyond the waiting ranks of saplings, hundreds of them, grouped by species according to his ecologist’s calculus. “Bob Hunter will be looking down on us smiling, knowing this park is getting greener and healthier.”

Thank you OPG!
Ontario Nature has had a long and fruitful partnership with the Ontario Power Generation (OPG), one of our most generous supporters. OPG holds a deep commitment to promoting a healthy and vibrant landscape that supports wildlife and people. We share this vision for Ontario and have worked closely with OPG over the years to put that vision in action.

This year, OPG generously provided Ontario Nature with a $50,000 sponsorship of our Nature Guardians program. Through this program, we will continue to foster leadership, raise awareness, and provide environmental education opportunities for young people, as well as engage the broader community through our many conservation events.

“OPG Biodiversity is a program of province-wide, conservation- focused, family-friendly action and education initiatives,” says Tom Mitchell, OPG’s president and CEO. “Who better to champion the future of our environment than the youth who inherit our actions. OPG is very proud to be the lead corporate sponsor of the Nature Guardians.”

Through the Nature Guardians program, OPG is making it possible for young people from diverse backgrounds to take on leadership roles and initiate restoration events in their own communities. We are deeply grateful to OPG for their continued involvement in helping protect and restore biodiversity in Ontario not just today but far into the future.

Note: The Nature Guardians program was started with funding from the Ontario Trillium Foundation in 2009. We are now in our third and final year of Trillium funding. In order to maintain this program, more sponsors like OPG or support from foundations and individuals, is urgently needed. Please contact Kimberley MacKenzie, director of development, if you would like to be a Nature Guardians sponsor.