Wild for the city 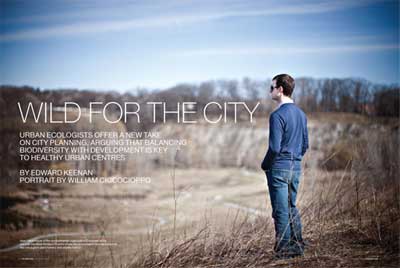 Neville Park Boulevard is a two-block-long cul-de-sac in east-end Toronto where, during normal times, one of the hotter topics of conversation is whether to call the neighbourhood “The Beach” or “The Beaches.” Running along the bottom of a wooded ravine, the street begins at a public staircase that leads down to a sandy beach on Lake Ontario and ambles north about 500 metres to a dead-end roundabout. The homes of some residents – many of them dog owners – back onto sloping yards densely forested with towering maples. This idyllic street, which might have been designed on a Hollywood backlot, was the setting for a real-life drama that unfolded earlier this year, a tale that, as the Toronto Star put it, “highlights the sometimes uneasy coexistence between humans and animals in an urban setting.”

Over the winter, pet cats had been disappearing and no one was sure why. Many people worried about a coyote that had been spotted prowling the ravine. Then, on February 21, the coyote leapt over a fence into the backyard of the Maxwell family. Sean Maxwell, a 32-year-old father of two, looked on in horror as, in a “flash of brown, flash of grey,” the predator grabbed Zoe, one of the family’s two Chihuahuas in his mouth and dragged her back up into the ravine. The following day, another small dog was attacked by the coyote; this dog survived but had serious injuries.

The local media immediately focused on the story. Some residents called for the coyote to be trapped or killed. Others protested that the animal (by then dubbed “Neville”) was blameless and should be spared. Toronto Animal Services began a campaign of harassment, attempting to scare the animal away with paint guns and air horns. On March 28, the City of Toronto announced that it would trap the coyote and euthanize it. Locals went door to door gathering signatures on a “Save Neville” petition, often confronting angry neighbours who thought the wild pet-killer was unworthy of being saved. Finally, on March 30, the city commuted the sentence, after a deal that a local councilor and provincial Minister of Natural Resources Donna Cansfield brokered: once trapped, the coyote, or coyotes, would be relocated to a zoo or a rehabilitation area.

It was by no means the first run-in between city dwellers and coyotes. Hostilities occurred in recent years in New York City’s Central Park and in a Chicago sandwich shop, and coyotes featured in a protracted drama a year ago in suburban Ottawa that resulted in the city hiring trappers after reports of attacks on pets. As in other places, the lesson many Torontonians have drawn from the Coyote Battle of Neville Park is that people and animals just were not meant to live together.

The same premise is evident in the daily struggles to keep pigeons off window ledges, raccoons out of garbage cans and rats out of kitchens. It is reinforced by the fact that in Ontario, roughly 15,000 animals are hit by cars each year – including a staggering 1,000 or so in Ottawa, the province’s roadkill capital. Or by the story of beavers at the University of Waterloo’s campus gnawing down trees a few years back (some of the animals were killed as a result). Or by Kingston’s troubles with fishers (weasel-like mammals) that were allegedly attacking house cats last year. Whenever wild animals make the city-news pages, the implication is that urban centres should remain fortresses against wildlife, keeping humans safe from nature.

But, according to Eric Strauss, director of Environmental Studies at Boston College and the science of the Urban Ecology Institute, that is exactly the wrong conclusion to draw. “Cities are nature,” he says, pointing out that the division between urban and rural areas is political and sociological, not natural. Built-up areas, he notes, amount to only 6 percent of the landscape in North America. “They’re completely connected through air and water and soil and pollution [with natural landscapes]. Nature is when you open your door, no matter where that door is.” And if a coyote is on the other side, you should probably consider it a good sign.

Strauss is a leader in the increasingly influential field of urban ecology, which brings together the social and natural sciences to study cities as ecosystems and to seek answers to natural and social problems by encouraging balance in the systems. It is a departure from traditional ecology, which for two centuries has sought to study flora and fauna as far removed from human interference as possible. Instead, urban ecologists consider human intervention to be a central and unavoidable component of every ecosystem and, conversely, view wildlife and plant life as key components of healthy cities.

Urban ecologists like Strauss suggest that without a healthy diversity of wildlife, there can be no green cities.“We know that balanced ecosystems do a much better job of providing clean air, clean water and safe soils, and of modulating climate,” Strauss says, pointing out that natural solutions are also cheaper and cleaner than high-tech engineering. Shade trees can save people 30 percent or more on air-conditioning bills in summer and provide a windbreak in winter, he notes, and the greater the density of the human population, the more efficient each tree is in its service. If we want urban forestry, green roofs, naturalized watershed management and other elements that urban planners increasingly advocate, we need active wildlife.

That’s because green cities require a diversity of indigenous plants, and those plants require a variety of animal life to survive. “You’ve got to provide all the ecosystem services [for the plant life],” Strauss says. “What you’d like is to have the insects to do the pollination, and you want the birds that are going to limit the total number of insects, and you want the mesopredators to modulate the [number] of birds and mammals that are in the system. You can’t really have à la carte ecosystems.”

Which is where coyotes come in. Strauss, who with his colleagues has been conducting radiotelemetry studies on urban coyote populations for the past 10 years, says that coyotes fill a niche in the urban ecosystem, providing a check on feral and domesticated cats – either by eating them or by encouraging their owners to keep them indoors. “Cats eat an awful lot of ground-nesting birds,” he explains. “As the bird population is suppressed, that releases the pressure on insects, and insect populations increase. So if you bring in a top-order predator like a coyote, that then exerts pressure on the mesopredators [such as cats].” This reverses the food-chain cycle. Strauss’s studies also suggest that coyotes in urbanized areas may reduce the risk to people of certain zoonotic diseases, such as cat-scratch fever, gastroenteritis and Lyme disease.

Encouraging urban wildlife is a practical matter of allowing natural solutions to help and protect us. Strauss talks of the “ecological services” animals provide. “We ought to be thinking, what are those species doing for us,” he says, “rather than immediately going to the notion of how these species compete with us or put us at risk.”