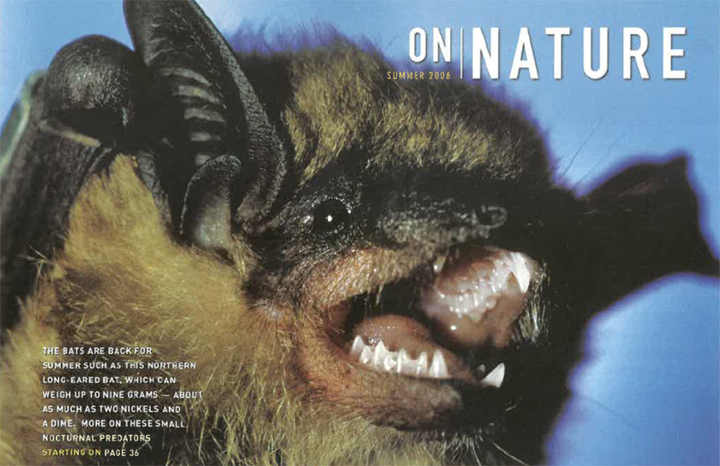 5 | This Issue
Sick Days: Children are the most at risk from pollutants.
By Victoria Foote

15 | Profile
Bred in the Bone: Drawing from his Ugandan heritage, Yuga Juma Onziga has created a global village in the heart of a big city.
By Allan Britnell

34 | Urban Nature
Green roofs are sprouting up in urban centres around the province, creating mini-ecosystems where you least expect them.
By John Lorinc

36 | Field Trip
Bats: Getting to know the world’s only flying mammal.
By Dan Schneider and Peter Pautler

46 | Last Word
Way of the Dodo: Ontario’s Endangered Species Act affords little protection for the species that need it most.
By Wendy Francis

On the cover
18 | Smog Daze
More and more research is shedding light on a dirty issue: the connection between air quality and a host of respiratory health problems.Our most vulnerable? Children.
By Sarah Scott

24 | Wild Child
The best places for conservation with kids.
By Lisa Keller

27 | Blood Work
For years, environmentalists tried to convince the Environmental Protection Agency to ban a suspected carcinogen. Then Scott Mabury made a groundbreaking discovery.
By Sharon Oosthoek

30 | Fertile Grounds
At Ontario’s EcoSchools, students don’t just learn about the environment, they save it too.
By Bruce Gillespie