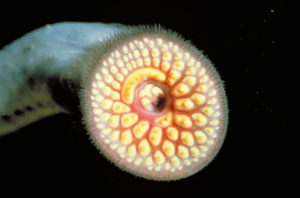 Re: “Letters – Reply to Dr. Foster RE: sea lampreys”

I have enormous respect for Randy Eshenroder’s fisheries expertise and experience, and I am not surprised by his views. I am sure they are shared by many of his colleagues at the Great Lakes Fishery Commission, not to mention a good number of other fisheries professionals. A diversity of views and a healthy debate of ideas is to be encouraged, particularly when dealing with complex natural systems such as our Great Lakes.

One could call the recent history of the Great Lakes one big experiment, or rather a series of experiments. Some were planned, such as the deliberate stocking of non-native salmon, while others, like the accidental introduction of zebra and quagga mussels, were not. These experiments will continue, be they in the form of selective harvest, climate change, or the likely invasion by Asian carp or other non-native species. Changes to the sea lamprey control program may not achieve a new equilibrium due to continuing perturbations to lake ecosystems, or it may achieve one that is not socially acceptable, as Dr. Eshenroder suggests. However, adaptive management that uses incremental, controlled “experiments” may provide opportunities for challenging some of our assumptions regarding sea lamprey.

A growing body of evidence, including recent mitochondrial DNA studies, indicates that sea lamprey are native to Lake Ontario, as well as Lake Champlain and some smaller lakes in New York state. Lake trout, lake whitefish, and other fish species appear to have coexisted with sea lamprey for thousands of years in these waterbodies, perhaps developing behavioural mechanisms that reduce negative impacts from sea lamprey. Lake trout and other species in Lake Erie and the upper Great Lakes were naïve populations that had never before encountered sea lamprey, and suffered greatly as a result. Many non-native species reach high levels of abundance soon after they invade new geography, before eventually settling at lower population levels as resident prey and predator species adapt. Would that have happened with sea lamprey in the upper Great Lakes in the absence of control efforts? Sea lamprey do have an unusual life history, but their high reproductive rate is also shared by many other Great Lakes fishes.

It is unfair to lay the blame of the collapse of deepwater ciscoes and other Great Lakes fisheries solely at the feet (or fins?) of sea lamprey. Overfishing, larval competition with or predation by introduced rainbow smelt and alewives, habitat loss and impairment are other factors that have also been implicated in their demise. The decline of the shortjaw cisco, which ranges from the Great Lakes to the Northwest Territories, cannot be entirely the result of sea lamprey. On the other hand, lampricide treatments used to suppress larval sea lamprey populations are the primary reason for the decline of northern brook lampreys in Great Lakes tributaries. I must admit, I find the Great Lakes Fishery Commission’s newfound concern for this species of Special Concern somewhat ironic.

It is not that the northern brook lamprey or the lowly stonecat, or even the Threatened lake sturgeon and the mudpuppy (currently under assessment by COSEWIC) are worth more than other Great Lakes fish or fisheries, however you define that value. But they are representative of a suite of species that are negatively impacted by sea lamprey control efforts, as well as being worthy of our consideration in their own right. At the very least, a more transparent examination of potential trade-offs made during sea lamprey control is warranted.

The greatest economic risk of reduced sea lamprey control is likely to the sport fishery for non-native Pacific salmon on Lake Michigan. Most of the sea lamprey in Lake Michigan probably originate from the St. Mary’s River, which produces more adult sea lampreys than all other Great Lakes’ tributaries combined. Do we really need to regularly use TFM on more than 50 Lake Superior tributaries, especially since lake trout are now recovered in Lake Superior and commercial fishing quotas remain underutilized? For that matter, should we re-examine our rationale for sea lamprey control on Lake Ontario, if indeed sea lamprey are native to that lake?

Much of the public, many policy makers, and even a surprising number of natural resource managers are poorly informed with respect to this issue, which was the impetus for my original article. The Great Lakes Fishery Commission rarely misses an opportunity to publicize the benefits of the control program, but we rarely hear about the other side. Over the last 50+ years, hundreds of millions of dollars have been spent on sea lamprey control operations and research, yet the primary means for larval suppression still remains dams and/or poisoning tributaries with lampricide. Regaining full connectivity between the lakes and their tributaries is a vital step in restoring Great Lakes ecosystem function and one that should not be delayed any longer. The removal, or even the relocation further upstream, of Lake Superior’s Black Sturgeon dam would represent a small yet significant step in restoring connectivity, without risking the collapse of all Great Lakes fisheries.