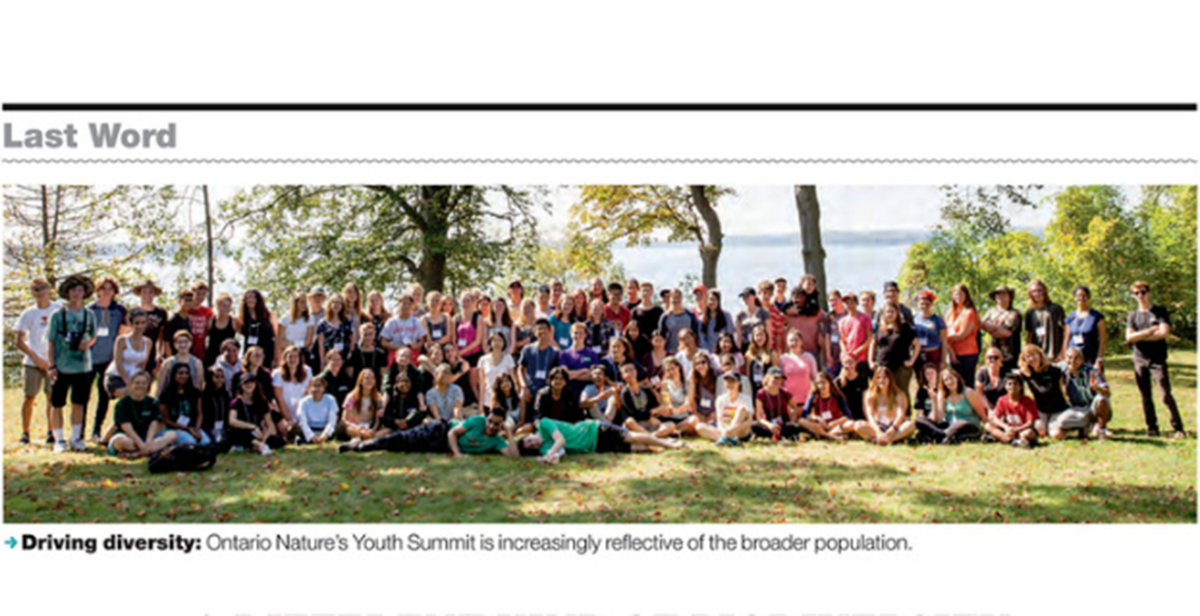 Re: A Different Kind of Biodiversity

If you are involved in Ontario Nature in any of the southwestern Ontario clubs you have probably met Peter Kelly. He was disturbed by the same lack of diversity and an ageing membership in the Guelph Field Naturalists. He was able to get the club to survey a significant cross section of the population of Guelph about interest in joining the club. From what they learned they changed the name to suggest a group that was more open to the general public. They also made changes to the way they promoted the club and made a special effort to promote it on campus, including the fact that meetings are held on campus. The result is that most of the executive of the club is now under 30, and the organization continues to offer a good program of meetings and events that are very well attended. Peter has been working on getting the other clubs in this part of the province to consider trying many of the same approaches.

As I said I have seen the same lack of diversity and an ageing effect in the hiking clubs. A member of the Guelph Trail Club suggested about 3 years ago that the club should try promoting their events through a web program called MeetUp. This turned out to have a significant impact. Participation in club events increased noticeably, with a definite increase in younger and more diverse participants. Many of the people who have come out to events through this program have joined the club, with the obvious impact on not only boosting membership but achieving the goals of reversing the ageing of the membership, and also the diversity.

These positive effects are great, but we need to do even more in order to deal with, as Richard Louv points out, “Nature Deficit Disorder”. As one step in connecting kids to nature a group was started here in Guelph, called Focus On Nature. We are now operating in 3 regions, Guelph/Wellington, Waterloo Region and Halton Region. We have started working on establishing another operation in Hamilton/Wentworth. You can check out our web site www.focusonnature.ca to learn more about what we do.